Steel to help you survive any scenario. 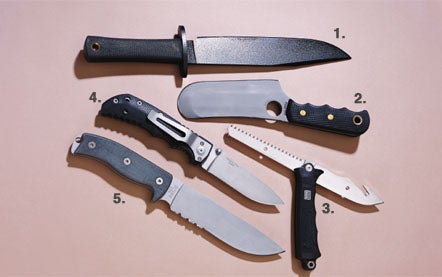 The late Col. Townsend Whelen, who probably knew as much about living in truly wild country as anyone, carried two knives, neither of which would have interested John Rambo. One was a Marble’s hunter with a 31/2-inch blade, which the colonel carried in a homemade sheath. The other was a smallish three-bladed folding knife of the pattern we call the “stockman.” So skillful was Whelen in the ways of the wilderness that he never had to “survive,” but for the rest of us, a truly heavy-duty knife often comes in handy, if only to do something mundane like build a blind. And if you have to combat a mountain lion in close quarters, or amputate your own hand when it gets trapped under a boulder, or build a temporary shelter when you get lost, a big knife will do better than a small one. Here are five very good ones. I’ve used them all and can testify to their effectiveness.

**1 COLD STEEL TRAILMASTER **
This is a Bowie knife, and it is probably a much better Bowie knife than Jim Bowie ever dreamed of. Cold Steel offers two versions: a 91/2-inch blade of Carbon V, which is tool steel; and a blade of the same size made of laminated stainless steel called San Mai III. The latter is ground with a “rolled” edge, which is very strong and sharp but difficult to make. I owned one of these and it was the sharpest big knife I’ve ever used. Carbon V version, $180; San Mai, $434; 800-255-4716; www.coldsteel.com

2 ALASKA BROWN BEAR SKINNER/CLEAVER
This unique tool is, depending on how you use it, a knife, an ulu (which is an Inuit skinning knife), a hatchet, and a cleaver. It’s made of D-2 steel, which is both tough and stain-resistant. Heavy duty hardly begins to describe the Brown Bear. $119¿¿¿$179, depending on handle material; 903-786-7371; www.knivesofalaska.com

**3 SOG HUNTER REVOLVER **
Now here’s a good idea: Machine a saw to cut bone and wood into one end of a piece of AUS-8 stainless steel, and on the other, grind a 43/4-inch knife blade with a gut hook. When you press a safety latch and push, one end pivots inside the Zytel handle and the other locks into place. You can’t tune a piano with the Revolver, but that’s about the extent of its limitations. $87; 888-764-2378; www.sogknives.com

4 HARSEY TACTICAL RANGER FOLDER
This is a huge lockblade that was designed for military personnel but will do double duty as a hunting and survival knife. The hinge on which the blade pivots-the weak point on most folders-would probably swing a safe door with ease. The blade is made of CPM-S30V steel, which resists rust but sharpens as easily as tool steel. The Harsey Folder comes with two blade styles, and the one you want is the drop-point, Model LC14800._ $299; 503-431-6777; www.lonewolfknives.com _

5 ONTARIO KNIFE RAT-7 RAT
stands for Randall’s Adventure and Training, a school that specializes in jungle survival and also designed this knife. The 61/2-inch drop-point blade comes in a choice of D-2 or 1095 steel, with a plain or partially serrated edge and a canvas Micarta handle. The RAT-7 is a powerful instrument. $120¿¿¿$140, depending on choice of steel and edge; 800-222-5233; www.ontarioknife.com