Gear for staging a convincing battle. 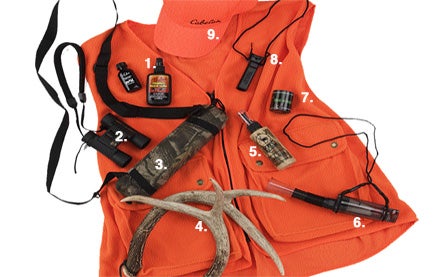 Sure, you can sit in the woods, knock a set of antlers together every few minutes, and call it rattling. But if you’re serious about luring a buck to a mock fight, you need to convincingly stage as many aspects of a real battle as possible. Here’s a list of everything you need to do just that, effectively and safely. 1. Doe-in-Estrus and Buck-Urine Scents
Bucks that respond to rattling will often circle downwind to verify with their noses what they hear with their ears. Place these scents upwind and off to each side but within shooting range of your position.

**2. Binoculars **
In one Texas study, more than half of the bucks that responded to rattling were never seen by the hunters. So bring good binoculars and use them.

3. Rattling Bag
When you’re rattling from the ground in an area where there may be other hunters, a rattling bag is safer than a set of antlers. Moreover, if your rattling antlers fail, the bag gives you a slightly different sound that bucks may respond to more readily.

4. Rattling Antlers
Nothing sounds as realistic as the real thing. To prepare a set of buck antlers for rattling, cut off the brow tines to create long, smooth handles. (Some hunters also cut off or dull the remaining antler tips to avoid poking their hands when clashing the antlers together.) Then drill a hole through the base of each antler, and attach a lanyard.

5. Scent-Elimination Spray
Use this to help prevent bucks that move downwind from getting a nose full of you.

**6. Snort-Wheeze Call **
Bucks snort-wheeze to challenge each other, often just before and after they clash antlers. This call is not as common as the grunt, however, so use it sparingly.

**7. Bleat Call **
Mix occasional doe bleats into your calling sequence to make the buck you’re hunting think the fight is over an estrous doe.

**8. Hands-free Grunt Call **
Bucks commonly grunt in the midst of a tussle. You can add a touch of realism by using a hands-free grunt call as you tickle the horns.

9. Blaze Orange Hat and Vest
You’ll sound like a pair of bucks fighting, and you’ll have a pair of antlers in your hands. If you value your life, wear orange, especially when hunting from the ground. And put your rattling antlers in a daypack when you’re not using them.