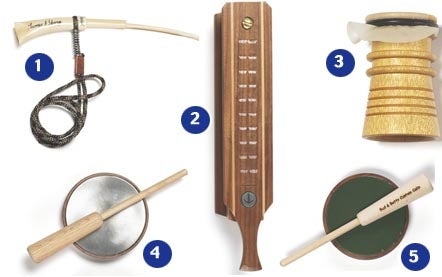 This spring, while everyone else is cranking out cutts and yelps on the same calls bought at the local mega-mart, amp up your sound with something that most hunters don’t have: a custom turkey call handmade and tuned by a master craftsman. They produce rich, ultrarealistic sounds and are priced quite reasonably, considering the work that goes into them. What else can you buy for $40 that is part instrument, part folk art, and a deadly effective hunting tool?

These call makers reflect the diversity of the custom world, from craftsmen who routinely win in the National Wild Turkey Federation Grand Nationals, to those who only care about winning battles in the woods.

**1. Jim Young Wingbone Yelpers **
Unlike a lot of wingbone makers, Jim Young uses bones from wild, not domestic, turkeys in his yelpers. This produces a full, realistic sound that is hard to achieve with calls from the less dense bones of domestic birds. All calls come signed and hand polished, and Young also makes yelpers from bloodwood and other exotics. $40; 315-252-8143

2. Dad’s Custom Box Calls
Jerry White, the “Dad” in Dad’s Custom Box Calls, carves his boxes from a single block of wood, a style made famous by the late, legendary call maker Neil Cost. Customers can request almost any kind of wood. The Dad’s Favorite in butternut and walnut won an honorable mention at the 2003 NWTF Grand Nationals. $100¿¿¿$120; 912-375-3237; www.dadscalls.com

**3. Treat Mountain Callers **
In addition to box and slate calls, Shawn Williams of Treat Mountain Callers makes a number of lesser-known styles that sound just as good. His scratch boxes are a true bargain at only $15, but it’s his tube calls that really stand out. Each is hand turned on a lathe one at a time and can be made to order from a wide range of exotic woods. $30¿¿¿$40; 770-748-2619; www.treatmountaincallers.net

4. American Friction
The Alumaglass earned Bruce Wurth the first-place award for the best-sounding glass call at the 2002 and 2003 NWTF Grand Nationals. It’s a loud, high-pitched call that is very easy to master. $35; 707-422-3899; www.americanfriction.com

**5. Bud and Betty Custom Woodworks **
Russell Lynch has won seven awards at the NWTF Grand Nationals, including the 2004 third-place Best of Show hunting call for his aluminum pot call. When used with its hickory striker, this call will produce sweet, raspy yelps. $45; 864-574-5623; www.budandbetty.com