No Buck? Chew On This 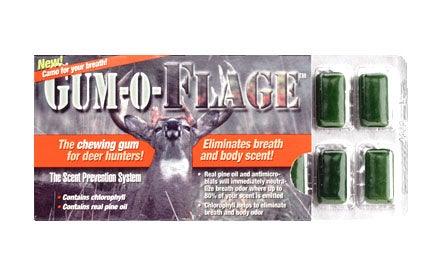 “It’s camo for your breath, and it’s getting good results,” says Neil Bretl, the creator of Gum-o-Flage, a new chewing gum exclusively for deer hunters. One pine-flavored piece is designed to keep your breath from alerting game to your presence. Bretl, a 35-year-old Wisconsin hunter, got his inspiration during a frustrating bow season seven years ago. Despite his use of special soap, shampoo, detergent, and carbon-lined clothing, which he kept in sealed bins with pine boughs, deer still picked up his scent and avoided him like a bad blind date. His brother, a dental student, suggested the problem might be his breath. Bretl was too desperate to be offended.”I took some Bazooka gum, chewed the flavor out of it, and then added pine needles,” he says. “It tasted horrendous. But I noticed a significant difference in the field.” One organic chemist and 11 test batches later, Bretl had Gum-o-Flage. Since it hit the market in August of 2004, over 70,000 packets have been sold, and it was in Bretl’s mouth on the day he got a 10-point buck last November.