Head to Head: What’s on TV?

We test four of the best new sonar units on the market, from cheap to steep. 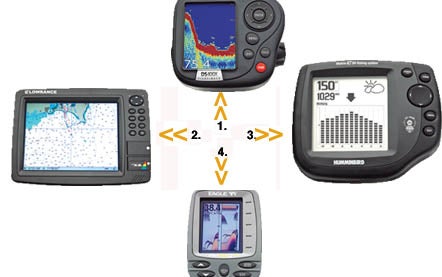 With high-definition liquid-crystal readouts in red, yellow, and orange all but ubiquitous in the latest generation of fish locators, technology has gone Technicolor. Color fishfinders can be had for either a song (Eagle’s and Raymarine’s affordable releases) or a symphony (Lowrance’s slick-tech, megabucks sonar-GPS marvel). That said, another new release is, in one instance, saving black and white from obsolescence (Humminbird’s advanced B&W; rendition with 3-D capabilities). No matter what your budget, finding fish has never been easier.

The Test
I either put the units on my 2004 Lund or hopped aboard friends’ boats that had them. Then I cruised and fished. One exception was with the Lowrance 111C, a product not released until late this spring. Nevertheless, the unit I run and am intimate with, the 104C, has the same functions without the hard drive. All the units had the capabilities to mark fish tight to the bottom, providing separation or color variations to distinguish individual fish in the nether reaches.

** [BRACKET “1”] Raymarine DS400X
_ $305; 800-539-5539; raymarine.com _**
This “autofocus” unit makes adjustments so you don’t have to. It compensates for changes in depth, boat speed, and waves by constantly changing kilohertz and bandwidth and, correspondingly, sensitivity, ping rate, and power. Best Features: Surface clutter is practically nonexistent, helping you mark fish, not turbulence, high in the water column. Points to Ponder: The high-definition imaging takes some getting used to; because of an overwhelming number of individual marks, baitfish resemble confetti.

[BRACKET “2”] Lowrance LCX-111C HD Sonar/GPS
$2,549; 800-324-1356; lowrance.com
Holy hard drive! Yes, the 111C has one, and it has the 20-gig capacity to store built-in background maps of coastal and inland waters, with depth contours. It also can record a day’s fishing for download to a PC. That way, it’s possible to pick out features after the fact and find their GPS coordinates. Best Features: This plasma TV look-alike will go into split-screen mode for GPS on one side and sonar on the other, each in dimensions larger than on most units. **Points to Ponder: **Try explaining the cost to your accountant, loan officer, or spouse.

[BRACKET “3”] Humminbird Matrix 47 3D Fishing System
$500; 334-687-6613; humminbird.com
With the emergence of Humminbird’s three-dimensional imaging, you get a more complete picture of dips, peaks, slopes, and fish position in relation to your boat’s location. Best Features: By switching on Selective Fish ID+ and punching the zoom, you can display the specific depths of fish. Points to Ponder: No color, unless you go for a substantial upgrade in the $1,650 947c 3D combo, which also has a built-in GPS chart plotter.

[BRACKET “4”] Eagle FishEasy 320C
_$220; 918-437-6881; www.eaglesonar.com _
For a very reasonable price, this color unit gives you a respectable 320 vertical pixels, showing both fish and a hard bottom in orange and red. Hit the menu button to easily adjust sensitivity, color, and chart and ping speeds, among other helpful parameters. Best Features: The readout’s clarity and detail, which were often poor in color units of years past, are unfettered under all light conditions. Points to Ponder: The 31/2-inch-diagonal screen (the same size as on the Raymarine unit above) is a touch small when it’s mounted on the bow and you’re standing and running a trolling motor.