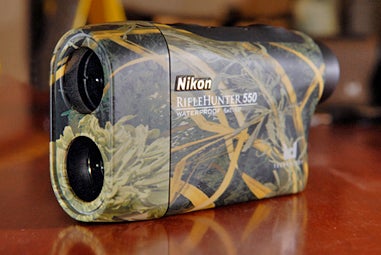 Nikon laser rangefinders
Nikon's two new laser rangefinders got me equally excited. Talk about smart technology! The Rifle Hunter 550 (shown) and Archer's Choice both have ID (incline-decline) technology. If you're in a treestand or hunting in the mountains, the ID let's you figure out exactly how far away the animal is, no matter what kind of steep terrain you're in. Ever shot over a buck (or mountain goat, for that matter), because you miscalculated the real distance? Never again. $249.95 for the bowhunter's rangefinder, $279.95 or $299.95 for the rifle hunter. Tim Romano
SHARE

A cluster of five lakes and ponds in south-central Connecticut provides some of New England’s best angling for calicos (crappies): Pickerel Lake in Colchester, Moodus Reservoir in East Haddam, Rogers Lake in Old Lyme, and Powers Lake and Pataganset Lake in East Lyme. “If the Connecticut state record for calico bass is going to be broken, the new record may well come from one of these ponds,” says Eric Schluntz, supervising fisheries biologist for the Eastern Region. Each of these lakes has public boating access and parking. Rogers and Pickerel Lakes’ ramps are fairly shallow and can become weedy in the hotter months. The top crappie bait is the golden shiner, or small marabou crappie jigs and small spinners. Small spinner baits and Road Runners are also good bets. Cast to woody structure or, later in the season, along deeper, 10- to 20-foot weed beds. Don’t be surprised if a decent-sized largemouth or two nails your lure here and there. Contact: Eric Schluntz, Supervising Fisheries Biologist, Eastern Field Headquarters (209 Hebron Rd., Marlboro, CT 06447; 860-295-9523).