The Best New Hunting Knives of 2013

These are Field & Stream‘s picks for the best new hunting knives introduced at this year’s SHOT Show: Arno Bernard... 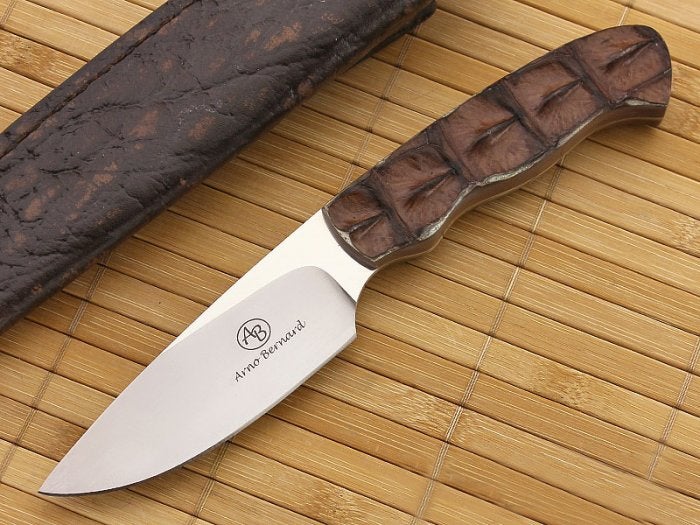 These are Field & Stream‘s picks for the best new hunting knives introduced at this year’s SHOT Show:

MSRP: $280 standard handles, plus $20 for warthog ivory, $50 for crocodile hide, and $160 for mammoth molar.
There is no question that the South African knifemaker’s blades are sexy and sumptuous. With handle materials ranging from crocodile hide to giraffe bone and mastodon molar, the fixed-blade models are hand-ground with a signature two-tone finish–a hand-rubbed satin finish paired to a mirror finish on the ricasso. They stand out in a crowd. The new Zebra sports a slightly smaller 3.5-inch blade than the brand’s most popular knife, the Warthog, and it carries less belly for more general cutting duties. But it retains a full grip, allowing the user to bear down with force and make fine cuts easily. A high-hollow grind “cuts so much better the meat,” Bernard Sr. says, in his South African accent. Believe him.

In hand, the Zebra is a delight. The full tapered tang tips the balance slightly towards the blade, and the full handle with a bit of palm swell is just right. Built of cobalt-enhanced Austrian N690 stainless steel, similar to the renowned Japanese VG10, the Zebra holds a keen edge and the blade should prove far tougher than standard 440C steel. And owning one makes you part of a very cool family: The Bernards build their knives in a small 4,500-square-foot factory near the family home. Arno Sr. and son Franco grind the blades, Arno Junior assembles the handles, and son Juan handcrafts each sheath from Cape Buffalo leather. No details on who packs the shipping boxes, but suffice it to say that the Zebra, like other knives in the Arno Bernard line, are a product of family pride. — T. Edward Nickens
Photo from gpknives.com

MSRP: $80 – $140
SOG Specialty Knives and Tools has several offerings for hunters in 2013, including six knives in two blade styles that comprise the company’s new Huntspoint line. The knife pictured on top here is the Huntspoint Skinning knife with a 3.6-inch satin-finished, drop point blade of AUS-8 steel. The well-contoured handle with scales of glass-reinforced nylon and molded rubber instantly feels at home in your hand and has bright orange accents, which is always good for a knife intended for field use. It’s a great size for most any hunting task with a design that is simple and effective. Exaggerated jimping (grooved texture) for the thumb and index finger, and a large finger choil, let you grip up on the knife for precise cuts. Though I haven’t been able to test it in the field, SOG had a special event at SHOT Show where I got to use the Huntspoint skinner on a pig. That tenderloin didn’t stand a chance.

Pictured on the bottom is the Huntspoint Boning knife with a drop point, 3.6-inch blade, also of AUS-8 steel. The handle has the same contours as the skinner, but with scales of rosewood. The Skinning and Boning knives both come with either the nylon ($80) or rosewood handles ($90). The rosewood versions of both knives are also available in S30V steel ($140). –David Maccar

MSRP: $154
The Dokka is not a pocket knife; it sports no clever pocket clip, neither fancy-pants thumbstuds nor assisted opening mechanisms. It is a folding knife, simple and straightforward. Tucked into the stainless-steel-lined cleft of a gorgeous chunk of curly Norwegian birch is a 3.3-blade of the famed Helle triple laminated steel–a layer of high-carbon stainless steel sandwiched between two layers of 18/8 steel, which protect the cutting edge.

Despite its 80 years of knife-making history, this was Helle’s first showing at SHOT in many years, if ever. Helle knives are built in a white-brick factory overlooking cliffs and fjords, tucked among a tiny village of only 500 souls. (The Dokka is named for a small mountain behind the factory.)

Helle’s Anders Haglund filled me in on the idea behind Helle’s blades: A very poor country for most of the 20th century, Norway’s watermen needed a knife tough enough for everyday use on the fishing fleet, but nice enough to carry on Sunday, when friends and family from nearby villages would gather on the docks. The latest incarnation of such an aesthetic, the Dokka is imminently useful. And each one is hand shaped, reflecting, to some degree, the aesthetic of the Norwegian craftsman who gave each knife its final blessing. –TEN

MSRP: about $385
The Italian knifemaker LionSteel is hardly shy about trading on a reputation for sleek design and innovation known to its native soil. The company’s knives are polished and artful, but they pack a punch. The new SR2 folder is a scaled-down version of the company’s landmark SR-1, named Most Innovative Imported Design by Blade magazine in 2010. A framelock folder, it carries LionSteel’s patented RotoBlock, an easily manipulated turnscrew that can lock the 3-inch blade in the open position. There was very little play in the prototype I handled. The steel is Sleipner, made by the same company that produces one of the hottest powdered steels on the knife market today, Elmax. Sleipner has a Rockwell hardness of 61, which definitely resides on the hard end of the scale, but LionSteel insists it is much easier to sharpen than the more widely used D2 tool steel. The blade has a high-hollow grind with a slightly clipped blade and enough belly for duty in a skinning shed. But that’d be a little like running a Formula racer at a dirt track.

SR2 handles come in both CDC-machined titanium (with gray, green, or purple anodized finishes) or less expensive anodized aluminum chassis in black, green, orange, and red. The frames are ported for weight reduction and easy cleaning, and each knife comes with a small tool used to add or subtract a glass-break button and to customize the pivot tension in the blade. Interesting. If you’re thinking the “Ferrari” of folding knives, you wouldn’t be off by much. –TEN

MSRP: $180
You’d better hope you’re never in circumstances so dire as to push the 0566 to its limits. A slightly downsized version of the brawny 0561, this still-beefy folder carries a 3.24-inch drop-point blade of Elmax steel, a third-generation premium powder steel with postmodern characteristics. Granules in the metal powder of Elmax are tiny even by modern steel standards, which helps create exceedingly sharp blades with a high degree of strength. A framelock, the 0566 carries an assisted opening mechanism kicked off like a flipper, and an easy-to-operate thumb stud. Once open, a lockbar stabilizer helps hold the blade in the working position. I really like the deep-pocket carry option, which seats the knife so it’s just visible. It’s not a cheap knife, but it’s one of my top few choices for new blades for 2013. –TEN

MSRP: $99
Founded in 1769, Puma is Germany’s eighth-oldest trademark. First available in the U.S. beginning in 1957, Puma knives–especially the pre-Rambo-era White Hunter, perhaps the first bushcraft knife to attract the fancy of Americans–were de rigueur in the backwoods. Puma knives aren’t on as many hips these days, but the company’s idea of merging Old World craftsmanship with post-modern globalism could change things. To bring down the price of its German steel blades, Puma introduces the SGB line. These knives still carry the German blades forged in famed Solingen, but they are assembled in Asia. The result–a traditional German Puma knife at a significantly lower price.

Known in Germany as the “jagnicker,” the Hunter’s Friend is one of the more noteworthy of the SGB breed. With a 4.7-inch slightly drop-pointed blade, the Hunter’s Friend is hefty enough for camp chores beyond the removal of innards and hide. Think light chopping and heavy camp kitchen work. Puma’s 440A stainless steel blades are Rockwell tested at 55 to 57. That’s a bit softer than many more modern steels, so what they give up in edge retention they make up in ease of sharpening and corrosion resistance.

With stag scales, brass rivets, and a blood groove scoring the blade, the Hunter’s Friend looks like it was born in the Black Forest, but I’m looking forward to pressing it into gut-this, cut-that, and slice-the-rest service around a modern deer and fish camp. –TEN

CRKT posits that the new design makes for a smoother cut through cordage as there are no pointed teeth to hang up in the material being sliced. I use a half-serrated blade while duck hunting to cut reeds and cattails for on-the-fly blinds. Billed as a gentleman’s folder, I plan on putting the Carajas through some decidedly un-gentlemanly conditions. –TEN

MSRP: $179.95
Spyderco has released three fixed blades in its new Enuff line, all of which are top-notch options for outdoorsmen who prefer a smaller, more maneuverable knife. Longtime Field & Stream editor, Slaton White, once told me the blade of a good hunting knife should be no longer than the user’s index finger–the logic being, when you’re working inside an animal, or anywhere you can’t see your knife, you know where the blade ends and therefore can keep your other hand out of its path. The Enuff series certainly fits that bill, with blade lengths for the sheepfoot, leaf shape, and clip point (pictured here) all measuring about 2.75 inches. All three are constructed from VG10 steel and weigh between 3.08 and 4 ounces. The leaf-shaped and clip point blades are full-flat ground with a smooth edge and the sheepfoot is a hollow ground, rescue-style blade with a fully-serrated edge.

The size of the handle (scales of injection molded fiberglass-reinforced nylon with Spyderco’s bi-directional texturing pattern) in relation to the small blade means the user has superior cutting control. Think of how much handle in relation to blade there is on a surgical scalpel and you’ll get the idea. A subtle hook toward the pommel allows for more control and force for pull cuts.

All three knives use the same sheath design. Injection molded from polymer, it features two ears at the mouth that snap around the leading edge of the handle scales, which hold the knife securely in place. All three knives can be inserted with the edge facing in either direction, and the addition of the company’s G-Clip attachment means the knives can be carried vertically, horizontally, or diagonally canted–or mounted to gear or a vest. A fishing version of the Enuff Sheepfoot will be released in the spring as part of the company’s Salt Series, with an H1 steel blade and a yellow handle. –DM