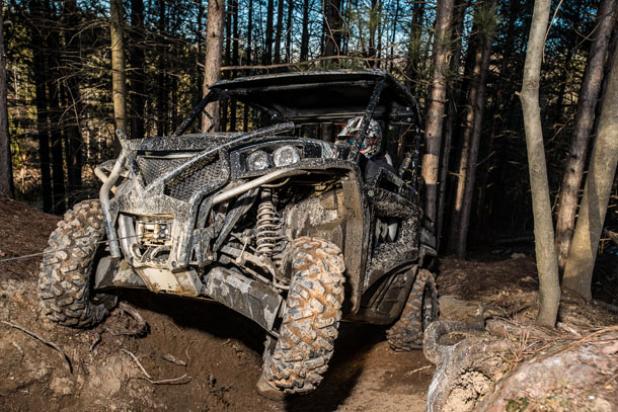 “All work and no play makes Jack a dull boy.” This infamous quote from the 1980 film “The Shining” used to seem like a great metaphor to describe the John Deere Gator UTV lineup. In years past, Gators were notoriously hard workers around the farm, but they certainly never gained respect as a class-leading trail machine. All of that changed in 2013 with the introduction of John Deere’s Gator RSX850i.

Powering the new RSX850i is an 837cc four-stroke V-twin mated to a closed loop Electronic Fuel Injection system. Outsourced from Italian engine maker Piaggio, the motorcycle-based power plant pumps out a claimed 62 hp (59.5 ft-lb torque), with a top speed of 53 mph. The engine has plenty of power and felt at home ripping down tight, wooded trails.

The RSX850i’s CVT transmission utilizes a gearbox with High, Low, Neutral, and Reverse. Unfortunately, the transmission on my demo wasn’t as smooth as it should have been. The Gator often lurched and jumped at very low speeds as the clutch struggled to smoothly grasp the CVT belt. As speeds picked up above a few miles an hour, the transmission was much smoother, which leads me to believe the belt may have had a “flat spot” on it. The gear shifter is tucked low between the seats and the gear selector is not marked well. Additionally, the Gator doesn’t electronically display the selected gear on the dash. So, when it was dark or the machine was muddy, the only way to effectively determine the selected gear was through trial and error.

My demo unit was the Trail version with four wheel independent suspension linked to Fox Racing shocks, which dampen nine inches of travel at all four wheels. The ride was sporty, if not a tad firm at lower speeds. As velocity increased, the shocks delivered a more compliant and comfortable ride, meaning they were tuned with aggressive driving in mind. Absent this year is Electric Power Steering (EPS), which I feel would greatly benefit the Gator. At high speeds, steering effort was acceptable, but in the tight wooded areas where I test, the lack of EPS on a machine costing 15 grand left me pondering its absence.

Four wheel disc brakes did an awesome job of bringing the RSX850i to a screeching halt. I was particularly enamored with the foot operated parking brake. Once I got used to the parking brake, engaging and disengaging it was quick and effortless. The Maxxis Bighorn 2.0 tires, which come standard on the Trail and Sport models, were an excellent choice and provide fantastic grip and puncture resistance for challenging terrain.

Ergonomically, my 6-foot-2-inch, 200-pound frame felt really comfortable in the Gator RSX. I certainly could have used a little more leg room, but that’s how I feel in every modern day SxS. The automotive style doors did a wonderful job of keeping tree limbs out of the cabin while keeping my own limbs inside. Under-hood storage was plentiful, and the rear dumping bed had more than enough room to carry my adventure gear. Another nice feature on the Trail model is the standard Warn winch with a wired remote. I used that winch on numerous occasions to pluck the Gator from a gnarly trail that was a little too washed out to negotiate.

Final Thoughts:
The 2013 John Deere Gator RSX850i is absolutely my favorite John Deere SxS I’ve ever tested. It’s faster, more powerful, more fun, and certainly capable of doing the work synonymous with the John Deere name. As a first year model, John Deere got most things correct. In the future, I’m hoping to see improvements like EPS, some transmission re-calibrations to deliver a smoother ride, and possibly even more power. With the introduction of the RSX850i, there is no doubt John Deere has proven they want a piece of the sport/utility SxS market. With Deere’s enormous resources and engineering prowess, I anticipate the RSX will become an even bigger force to reckon with in the future.
**
2013 John Deere Gator RSX850i at a Glance
HITS**
– Muscular, sporty look
– Underhood storage area is sealed and spacious
– Large dashboard dial makes 2wd, 4wd, and 4wd with differential lock easy to select
– Integrated hinged, plastic doors help keep body parts in and trail obstacles out
– Trail and Sport models come with Maxxis Bighorns and Fox Shocks
– Finally, a John Deere that can compete with other sport/utility SxS’s

MISSES
– No electronic gear indicator on dash
– Gear selection markings on the shifter are difficult to see
– Shifter doesn’t have deep enough detents, which makes it too easy to shift into the incorrect gear.
– Steering is difficult, due to the lack of EPS
– The transmission on my demo had difficulty at crawling speeds with a jumpy engagement of the CVT belt