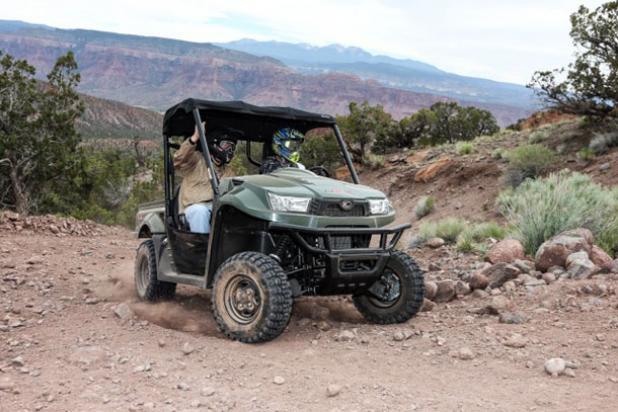 The Kymco 2014 UXV 700i is basically a carryover of last year’s model, with the addition of a healthier 695cc liquid-cooled four stroke engine that pumps out a claimed 45 horsepower. There are several trim options available. While model designation determines which bolt-on goodies each machine gets, all UXV 700i’s get this fuel-injected power plant, which debuted in their ATV line last year. Power and performance is on par with other 700-class machines.

A continuously variable transmission (CVT) with high, low, neutral, and reverse graces all UXV models. The transmission performance was exceptionally smooth and provided excellent compression braking while negotiating downhill descents. An electronically locking front differential comes standard, and allows the UXV to claw at the terrain with all four wheels when the going gets tough. The four wheel drive switch was updated this year to a small rotary knob; carried over from the ATVs. The design was easy to use in the dry, dusty terrain of Southwest Colorado’s Gateway Canyon Ranch, but I’m not totally convinced the dial will work as easily with wet, muddy gloves in the terrain where I usually test.

Four wheel independent suspension delivering 7.5 inches of travel in both the front and rear worked especially well when crawling through rutted and rocky slow speed sections. Handling became a little less predictable as speeds increased–the UXV 700 tends to exhibit a more pronounced body roll. Steering feel is light, but lacked the feel of precision at high speeds, and tended to dart around more than I’d prefer. No electric power steering (EPS) is available at this point. I’ve been told that Kymco is experimenting with EPS so I wouldn’t be surprised if we see it for model year 2015.

Long journeys are no problem for the UXV 700i thanks to an 8.45-gallon fuel capacity and a fuel efficient engine. I ventured approximately 50 miles from the base camp and gained in excess of 5,000 feet in elevation to grab lunch at the top of a 10,000-foot plateau. I still had plenty of fuel left after a long day of wheeling through some steep, gnarly terrain. The base seat cushions felt comfortable during the journey, but the rear head rest is intrusive and could stand to be moved back a few inches. Seat belts are not adjustable either so my neck got rubbed by the belts in both the driver and passenger seat on my excursion through Gateway Canyon.

In addition to the base, SP, and LE models, which are essentially a carbon copy of last year’s XUV 500i with a bigger engine, new models this year include the HE (Hunting Edition) and Turf model. The HE sports a True Timber Conceal camouflage body, a trick front rack and bumper, and a half windshield. The Turf model has an open rear differential designed to turn sharper with less damage to grass. The only way to lock the differential is to engage four-wheel drive.

Final Thoughts
Kymco has worked tirelessly over the last decade to develop bold new ATVs and SxSs capable of competing with the industry giants. Headquartered in Taiwan, the company’s products have evolved impressively with an ever increasing understanding of the ATV/SxS market in North America. The 2014 UXV 700i is definitely a step in the right direction for Kymco. The addition of a larger displacement engine was a necessity. However, I’m concerned Kymco may be treading in dangerous waters with a starting price of $10,099. Case in point, the all-new 2014 Honda Pioneer 700 is just $9,999. A low price point during a time when the competition’s prices slowly started creeping up a few years ago was one of the main reasons Kymco gained market share.

For Kymco to prosper, I think they’ll need to follow a path similar to the one Hyundai and Kia took in the automotive world 20 years ago: build a great product with exceptional quality, but at a price attractive enough to draw new buyers to the brand. The 2014 Kymco UXV 700i is certainly a capable SxS, but it’s now priced $100 more than Honda’s new Pioneer 700. Whether or not Kymco is pricing the 2014 XUV 700i out of the market will remain to be seen.

2014 Kymco UXV 700i at a glance
HITS
– New 700cc engine is more powerful, lighter, and better in every way than its predecessor
– Low gear climbing is fun
– New electronically locking front differential is great when traction is lacking
– Large under-hood storage box
– Strong Brakes
– New camo version should be popular