Dispatch from Alaska: Finding Fish with a Raft and UTV

I’m always looking for the perfect Alaskan river float. Really, who isn’t? In contrast to the land of the Forty-Eight,... 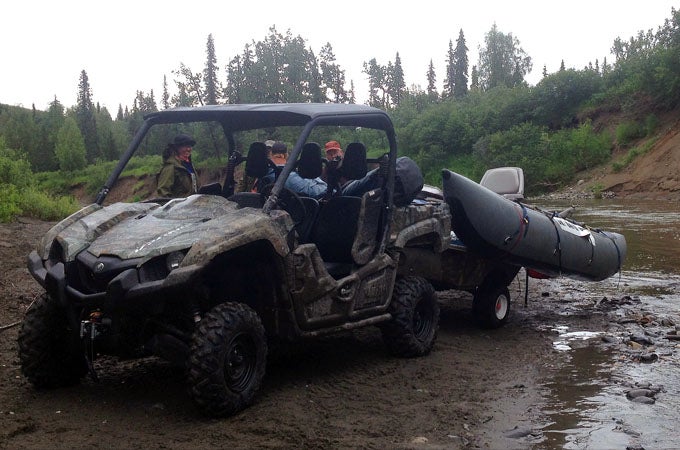 In contrast to the land of the Forty-Eight, most of my local streams have critical points of demarcation; get out at spot “A” or you float for 10 more days to spot “B”. In short, you do not want to miss your take out point.

Using an ATV or UTV to squeeze an extra day out of a river is often the only way to wiggle your gear out of the wilderness.

A few weeks ago while scouting a float, I found a tight trail in the Petersville Valley that would add one more day of trophy trout fishing to a two-night trip. After walking the trail for two miles on foot (because we hadn’t trailered the UTV) I marked a take out point with colored tape on alder branches. I hoped that no one would remove them, and told my buddy Matt I would meet him on the shore on the following Wednesday.

He asked, “How are we getting the raft and gear out?”

On Wednesday morning with a Yamaha Viking in tow, the slog of the two-mile trail was a faint memory.

It was a super sloppy, gray day. Due to a soaking rain the night before, the local rivers were rising quickly. I knew my pal Matt and his two guests would be ready to hit the shore for a shower, and dry clothes.

The trail had huge, exposed roots and sharp, deep holes. The Viking was impressively sticky on the trail and worked particularly smoothly at low idle speeds. Few things are worse than low speed traveling with a jerky accelerator. I brought a plastic cart, hoping to strap the 14-foot raft on top and then head to the road two miles straight up the trail.

Matt drifted in at 1:00 p.m. as scheduled, relieved to see the Viking and trailer. We organized all the dry bags in the Viking’s bed, squeezed the Maxxon cat raft on to the trailer, and strapped her down. The extra day was rewarded with amazing bow fishing the last night with a couple of 24- and 25-inch rainbows released.

We went at a crawling pace out and up the trail, with everything staying surprising steady and stable. Except for letting some air out of the raft to squeeze it through a boulder, the project was a breeze with the three-person Viking hauling all of the gear out in one trip.

After unloading up on the road, it took just a few minutes for me to head back down the trail to meet Matt as he was hiking up.

“This sure beats hauling all this gear out by hand. I can’t believe this machine hauled you, the gear, and my two passengers out in one trip,” he said. “You have this all summer right?”

Peter Mathiesen lives, hunts, and fishes in Alaska — one of the toughest testing grounds for ATVs and accessories. Each week Mathiesen will send a dispatch from the last frontier, informing you how to keep your quad running.