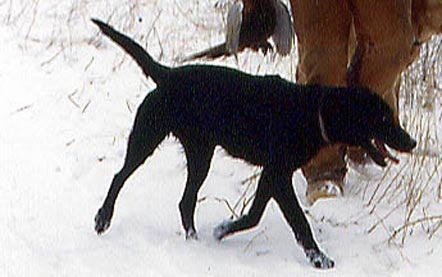 They were both too fat. he had a big safety pin, the kind used for a horse blanket, holding together the front of his hunting coat, and under that an old red-and-green wool shirt that threatened to throw its buttons. His black Labrador wheezed and whistled from the effort of walking up to the line where the judges were waiting, and when he removed her collar, her neck fell to double in size. As they stood there listening to the explanation of the test, the fat black dog snuggled so close to her master’s leg that she seemed to be leaning on him for support. He let his arm drop and she put her nose in his palm and closed her eyes. A minute ago I had been ready to laugh at these two, but now I had to turn for a minute and wipe away something that seemed to have gotten into my eyes.

The test wasn’t easy. The first bird was a rather long blind across a weedy channel and the second mallard was a long marked single deep back among dead timber. A couple of the younger dogs had finished the series, but none without a lot of whistles and hand signals. On a rating of one to 10, the best score I had given was a generous five. A lot of duck hunters would have used a boat rather than send a dog through the stumps and snags, and I wouldn’t have blamed them. What we judges had meant to be a hard marking test turned out to be one that depended a lot on pure heart; “want to” was what we ended up grading the dogs on. Most of them didn’t have a lot of it.

The fat dog’s name was Bingo, and somehow I got the picture of the two of them eating popcorn together and watching game shows on television. I imagined them sitting side by side at the local bar, drinking beer and watching baseball. What I couldn’t imagine is one ever being more than 3 feet from the other if they could help it.

Much to my surprise and delight, Bingo did a pretty respectable job on the long blind. You could hear her for half a mile, huffing her slow way through the lotus pads and pickerel weed. At first I was worried that she’d drown or have a heart attack, but she was too fat to sink and seemed more than delighted to do something that her boss wanted done. Bingo struggled her belly over the bank, took a half dozen deep breaths, waddled over and picked up the duck and swam back. Her master hadn’t used one whistle or so much as moved a hand. It took forever, but Bingo was showing the skinny Labs a thing or two and the crowd loved every long, worried minute of it.

She finished her retrieve with a lovely little flourish, walking around behind and sort of adjusting herself and then sitting practically on his foot and offering him the duck as if it were a crown. As one of the senior judges, I was supposed to be the very model of impartiality and decorum, but I put my notebook under my arm and joined the gallery in a spontaneous minute of applause. Then I wrote “10” next to Bingo’s name on my scorecard. By now she’d recovered her breath and her handler signaled that he was ready for the next test. He had Bingo lined up perfectly and she glowed with anticipation at the shot. The bird boy threw the shackled duck and Bingo slid into the water with a very audible sigh of pleasure and began paddling toward the swamp.

[NEXT “Story Continued”] You look for a lot of subtle things when you’re judging a trial. You get so you can sense indecision in a dog, or reluctance. Some dogs are too bold and don’t use their head, just crash on until they stumble over a bird or get handled to it. Others are too tentative, continually asking their handler, Am I doing this right? I don’t like either type. What I like in a dog is a mixture of confidence, common sense, and obedience; about in that order. I’m big on a good dashing water entry, an aura of determination, and a feeling that a dog wants to please rather than do the job like an automaton. I like to see more of the pure dog than just the result of training.

I’d gotten away from field tals for a while because I felt that a lot of the judging was unrelated to hunting situations, and there was a laziness that ended up with the tests being too hard rather than being fair, and having a few dogs come back in recalls. I’d run a lot of dogs and had a very sensitive feeling about the work and companionship part of it, and I hated to drop a dog too quickly. I’d lost a couple of first-place ribbons because of what I felt was a lack of understanding of the dogs’ problems in certain situations. I felt that a lot of judges had never really done enough gunning or worked enough with dogs to be able to get a good handle on borderline judgments.

But, at the bottom, the whole thing is for the dog, not the convenience of the gallery or the handlers or the judges. You get to feeling sorry for dogs that have handlers who are too harsh on them-and almost as often, for handlers who have dogs that are too good for them. I’d been one of the latter a couple of times and am still a little embarrassed about being obviously dumb when I should have left it all to the dog. But here I was trying to keep a good balance between my head and my heart and worrying about poor old Bingo running into an underwater log or limb and getting disoriented, or worse, hurt.

Bingo had been her perfunctory self in our other series in the morning, taking forever and looking anything but stylish or fiery, but somehow she always got the job done. Other dogs were faster, more elegant, or more exciting, but where they’d overrun a bird, then circle for a minute trying to find it, Bingo would walk up to exactly where it was, pick it up, and come back. One of the gallery remarked that watching her was “as exciting as seeing a guy lay brick.” That may be, but the brick got laid, and laid right. And after all, this was just a fun interclub trial, not a big regional AKC sanctioned affair. We were supposed to be judging hunting retrievers, not watching a track meet. And as much as I like a dog that can zip out and zip back in, I also respect the old workman who gets it done right the first time.

Bingo was not going to be placed first or second. Those places had already been established by a couple of dogs that were clearly “big trial” contenders, dogs that shouldn’t have been in this trial at all. It was just that their owners were ribbon-hungry and liked to show off a bit when the chance came along. But a third here was not to be taken lightly. There were plenty of old campaigners doing their stuff, and a couple of up-and-coming dogs that had it all on any given day.

[NEXT “Story Continued”] Sometimes in competitions, a great and certain knowledge spreads among the judges, the spectators, and the contestants that a prize is deserved, regardless of what the rules or the score are. And there was poor old Bingo, looking like the kid at the picnic who had unexpectedly been asked to join the games and said, “Why not?”

Well, not to prolong what you’ve already guessed. Bingo did it all, and we gave her the ribbon for third place with as much pleasure and sense of rightness as I can ever remember.

At the little awards ceremony, her master poured her tiny mouthfuls of beer from a long-necked bottle, and Bingo seemed rather self-satisfied. I was somewhat in love with her by now and more than a little envious of her owner. When it was his turn to come up and get his ribbon we all burst into a few minutes of applause and cheering that we had held, pent up, for some time. He took the ribbon and waited until we’d quieted down, then bent over and fastened it to Bingo’s collar, playing with her ear for a second and, speaking for both of them said, “Well, as they used to say, the show ain’t ever over until the fat lady sings.”

Then he and the fat lady went over to his truck. He lifted her into the front seat and gave her the last swallow out of the beer bottle, handed the empty to a friend who came to say good-bye, and they drove off.

I watched the truck disappear as it turned through a stand of pines and, through the rear window, I could see them sitting shoulder to shoulder. For a moment I thought about love. Not the kind that they sing about or the kind that disgraces a bumper sticker, but the kind that means you’ll put your arm in the fire. The kind that becomes a Navy Cross or Silver Star-or a 10-cent pink-and-silver ribbon. The kind that you don’t talk about. The kind that is just there, like the Earth.

I wasn’t the only one watching the truck fade away. Half a dozen of the crowd had moved off by themselves and were watching it too. I wondered what we all felt in common, and I think it was sorrow. Suddenly we all knew what it was we had been looking for for so long, from some one or something…and we felt that it had passed us by.

I watched the truck disappear as it turned through a stand of pines and, through the rear window, I could see them sitting shoulder to shoulder. For a moment I thought about love. Not the kind that they sing about or the kind that disgraces a bumper sticker, but the kind that means you’ll put your arm in the fire. The kind that becomes a Navy Cross or Silver Star-or a 10-cent pink-and-silver ribbon. The kind that you don’t talk about. The kind that is just there, like the Earth.

I wasn’t the only one watching the truck fade away. Half a dozen of the crowd had moved off by themselves and were watching it too. I wondered what we all felt in common, and I think it was sorrow. Suddenly we all knew what it was we had been looking for for so long, from some one or something…and we felt that it had passed us by.