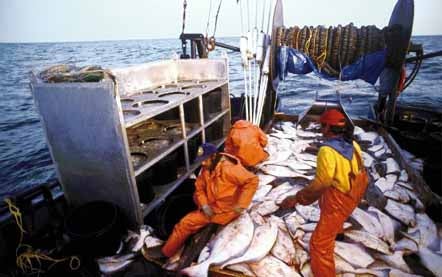 Let’s be honest: The only people who really give a damn about saltwater fishes are the ichthyologists who study them and a minority of marine anglers who’ve made an effort to inform themselves about why so many species are in dire straits.

By the early 1970s, swordfish, marlins, several tunas, and offshore groundfish like cod, haddock, and halibut-as well as many inshore gamefish-were half as plentiful as they’d been 25 years earlier. And it is much worse now.

Just how bad things have gotten was made clear early in 2003, when Boris Worm, a researcher at Germany’s Institute for Marine Science, and Ransom A. Myers, a professor at Nova Scotia’s Dalhousie University, published their findings in Science and Nature magazines. The news was so alarming that major media outlets throughout the world subsequently picked it up-and only now, after irreparable damage has been done, are people starting to pay attention.

**Going, Going, Gone **
The researchers’ most important discoveries were (a) industrial fishing generally kills 80 percent of the fish in a given area within 15 years and (b) worldwide, more than 90 percent of our large predatory fishes have vanished.

They made two recommendations: first, to establish seasons and limits for every species in the sea. But in order for such regulations to be sensible and therefore enforceable, they would have to be based on ecological information that biologists currently lack on even commercially valuable species. Thus, their second step would be to create “no-take reserves” to protect large oceanic areas for breeding and immature fish.

For many saltwater anglers, however, no-take reserves are anathema, and in many cases, they should be. They smack of a year-old, but still controversial, ban on recreational fishing in 10 of the 12 marine protected areas (MPAs) around California’s Channel Islands. Although some MPAs allow sport fishing, there are those who claim that MPAs are part of an anti-angling conspiracy organized by the likes of People for the Ethical Treatment of Animals.

The academic argument against no-take zones comes from Robert Shipp, chairman of the marine sciences department of the University of South Alabama. He insists that they don’t work because most large fish range over considerable distances and the management benefits of “spillover” (fish leaving the reserves) are less than those of a well-managed fishery.

Proponents of no-take reserves say that Shipp’s point is invalid due to the fact that few fisheries are well managed. Indeed, the failure to regulate species for optimum sustained yield is the nub of the global ocean crisis.

They also point out that although pelagic species do range over areas greater than those encompassed by most proposed no-take zones, such areas would nonetheless protect many bottom species that wander little, if at all.

Getting It for Nothing
Reluctantly, Californians seem to be adjusting to the Channel Islands MPAs. But a surprising number of anglers on the East Coast are still worked up over the issue. There’s a historical reason for this. Whereas saltwater anglers in California have been licensed by their state since 1934 and are more accustomed to restrictions, recreational fishermen in the Atlantic have been required to buy licenses in Southern states only during the past decade or so, and north of Delaware Bay, anglers still fish for free.

As a result, Atlantic fishes are managed primarily-if not exclusively-for license-buying commercial fishermen. Recreational fishermen get the leftovers. By contrast, fee-paying Pacific sportsmen get first choice on a number of species.

A case in point is the striped bass. Despite its first being introduced to the Pacific in 1886, it has been protected there as a gamefish longer and better than in its native Atlantic. Stripers have declined in the Weest because their brackish-water spawning and nursery grounds have been ruined by onshore development, not because the species has been overfished. In contrast, although stripers in the East still have adequate breeding and nursery grounds, their population collapsed twice in the past century for lack of protection from commercial overkill. We shouldn’t forget that.

Dancing with the Devil
Rather than pay into the system and take their rightful place at the management roundtable, anglers in the Northeast seem to prefer to grumble about how unfair the system is and are rallying behind a hastily conceived bill-the so-called Freedom to Fish Act.

Several Eastern states have already come up with their own versions of this noble-sounding law. Rhode Island’s statute requires a strict scientific justification for any proposed no-fishing zone, a periodic review of all such zones, and a provision to promptly reopen zones once the basis for their closure is eliminated or proved doubtful.

In Maryland, the commercial fishing industry recently tried to hijack the bill in order to weaken existing management. The netters’ version would have required unequivocal scientific data before any form of fishing could be curtailed. Yet scientific data on a scale to meet such stringent standards would require outlays of public money that no state or the federal government is presently willing to allocate.

A generation ago, marine anglers allied themselves with the commercial fishing industry to put an end to the overexploitation of our nation’s offshore waters by foreign fishermen. Sadly, in creating an Exclusive Economic Zone-the so-called 200-mile limit-all we did was chase out the foreigners and underwrite a greatly expanded overexploitation by American commercial fishermen.

As currently written, the Freedom to Fish Act that many East Coast anglers are pursuing would allow commercial fishermen to continue their pillaging of the seas. In other words, recreational anglers may very quickly find that they’re dancing with the devil: Courtesy of sportsmen, commercial fishermen may soon be gifted with a national law that weakens federal regulatory authority more than anything the seafood industry would have dared to propose on its own.

The silent majority is finally beginning to realize what’s at stake in saltwater fishing, but they have to be careful of limiting their options. “If MPAs can be a useful tool in management,” says Jim Range, chairman of the Theodore Roosevelt Conservation Partnership, “it doesn’t seem a good idea to make it impossible to use them.” Backing the Freedom to Fish Act as it now stands might be our first unified step toward a law that could slaughter as many of our remaining fish as a combined fleet of long-liners, pair-trawlers, and gillnetters.