Firstest With the Mostest

Why slug guns are not quite rifles. 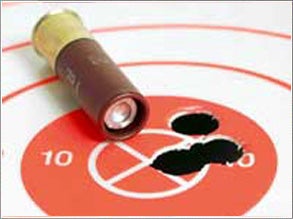 Since we last visited Slug World in this column a couple of years ago, our favorite big lumps of lead have picked up considerable speed. Where slugs formerly topped out around 1550 fps, Winchester’s Partition Gold and Hornady’s XTP now launch saboted bullets at a muzzle velocity of 1900 fps. Lightfield’s scary 31Â¿Â¿2-inch Commander — an attached-wad, 455-grain saboted lead slug — breaks the 2000 fps mark. In terms of velocity and energy, the new breed of shotgun slug is getting there firstest with the mostest.

Yet killing power has never been the shotgun slug’s weak point. A 1-ounce chunk of lead, properly applied to a whitetail deer, invariably constitutes a lethal dose. The trick with slugs lies in making them go where you want them to. Faster slugs shoot flatter, to be sure, extending the slug’s range to 125 yards and more, but even superfast slugs aren’t rifle bullets, and shooting them well requires a special approach.

Pennsylvanian Randy Fritz knows as much about taming slugs as anyone. Fritz builds the very accurate Tar-Hunt semicustom bolt-action slug guns and consults for Lightfield (732-462-9200; for Tar-Hunt, call 570-784-6368). He’s shot as many as 1,000 slugs in a single day (from a recoil-absorbing 120-pound bench gun) when testing a new lot of Lightfields.

Even as slugs flirt with the 2000 fps barrier, Fritz says the three main complications in slug shooting are still recoil, wind drift, and range estimation.

Recoil
We all know we’re getting kicked when we shoot a slug from the bench. What we don’t understand, says Fritz, is that slug recoil can play a nasty trick on us if we don’t shoot the gun properly.

“Slugs are so slow that they’re still traveling down the barrel as the gun recoils upward and to the left,” he explains, due to the torque of the heavy projectile as it spins out of the barrel’s rifling. “If you sight the gun in at the bench without holding the fore-end, you’ll actually sight it in 5 to 6 inches high and to the left of where it will shoot when you hold the fore-end normally in the field.” Therefore, says Fritz, you’ll have to adjust your bench-rest technique. Instead of using your left hand to plump up the sandbag as you would with a centerfire rifle, clutch your gun’s forearm firmly to duplicate your hold in the field.

Wind Drift
Despite their increased velocity, the new, faster slugs are remarkably susceptible to wind drift. “I thought increasing velocity by 400 fps would make a big difference in wind drift, but it’s only a matter of a couple of inches,” Fritz says. At 100 yards, a mere 10-mile-per-hour crosswind can move a 1900 fps slug 5 to 6 inches. Increase that wind velocity to 17 mph and your slug can shift almost a foot at 100 yards and 2 feet at 150.

To save headaches at the range and heartaches in the field, Fritz recommends doing your sighting in at 50 yards, where wind deflection is minimal. “When you zero a slug gun at 100 yards, you have only zeroed the gun for that day’s wind,” he says. “Your zero may only be within 6 inches of where it’s supposed to be.”

Sight in at 50 yards around 2 inches high (the appropriate height will vary from slug to slug; check the trajectory figures), and you’ll be on target at 100 yards.

Fritz believes the best way to learn how to dope the wind is by shooting an accurate .22 rimfire at the range. “Time of flight of .22 ammo is close to that of a slug. With a .22 and some wind flags, you can learn what wind does to slugs without the expense and heavy recoil of shooting slugs,” he explains.

Make yourself a dozen wind flags out of straightened wire coat hangers. Bend them into an L shape with the base of the L about a foot long. Put the long end in the ground and tie an 18-inch strip of surveyor’s tape to the other end. Set a lane of flags between the target and the bench. Watch the flags wave and see wheree your slugs strike under different wind conditions. As you watch the flags move, compare the various patterns to the bending of the grass and swirling of the leaves so you can begin learning to judge wind in the field.

A rimfire rifle, incidentally, is also an excellent tool for practicing follow-through — keeping the sights on the target as you pull the trigger and after — a crucial skill to good slug shooting.

Range Estimation
Although faster slugs shoot quite flat over 100 yards, they begin to drop quickly beyond that range. In terms of trajectory and wind drift, Fritz equates a 100-yard shot with a slug to a 300-yard shot with a centerfire. “Range sneaks up on everyone,” he says. “Inside of 100 yards, you can be 6 inches off if you misestimate the wind or drop, and you’ll still hit a deer in the vitals. When you think it’s 100 yards and it’s really 120 or 130, you’ve added another 40 percent of error.”

Fritz strongly believes every hunter is duty-bound to take a rangefinder into the field. “It doesn’t matter how much you know about slugs; if you can’t determine range accurately, none of the rest matters.”

The new slugs still aren’t long-range projectiles, and Fritz fears that demanding even better slug performance could ultimately be self-defeating. The slug’s inherent short range is the reason behind shotguns-only legislation in densely populated parts of the country. Fritz thinks that tapping the slug’s long-range potential could eventually endanger gun hunting in some states.

“I hate to see tables giving slug ballistics out to 200 yards,” he says. “We’ve got to be careful or we’re going to kill the goose that laid the golden egg.” Which would be silly, when we can shoot a deer with a big lump of lead instead.