Forget the good old days; they didn't have rifles like this back then. 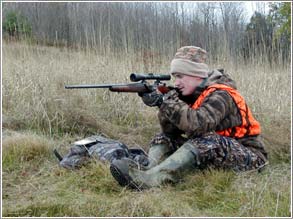 One of the few compensations to geezerhood is that you can remember how things really were in the good old days that everyone yearns for and can snicker to yourself. You would not want to go to a dentist in 1945. Television, in its so-called “golden age,” would induce coma now. Even the rifles of yesteryear, handsome as they were, cannot begin to compete in accuracy with their modern counterparts.

But they had a certain style, particularly the high-end .22s. There was a grace to them that you don’t see very much today, and they were beautifully put together, for those were the times when skilled hand labor was still cheap.

And now, geezers, geezerettes, and those to whom geezerhood is just a Viagra joke, there is a new .22 that is a true throwback to the good old days — except that it shoots much better. It’s called the Thompson/Center Classic Rifle; it is unerringly accurate; it has the aesthetic appeal of Charlize Theron (and you can bet your Viagra we didn’t have anything like Charlize around back then); and it costs $335.55.

Looks Good
Seldom have so many admirable features been crammed into one firearm. Let’s begin with aesthetics. Many rifles are designed by mechanical engineers who have no more sense of grace and style than the beasts of the field. And to make matters worse, some contours are there because they are easy to form on duplicating machines, never mind if they’re ugly.

The T/C Classic Rifle is slender, graceful, and distinctive. I don’t know of another rifle that looks anything like it. The stock is sleek, with not an ounce of extra wood. It’s plain walnut, which is exactly what the stocks of the great old .22s were. There is no checkering. Better to leave the walnut plain than clutter it up and raise the price. Even the trigger and trigger guard curve gracefully.

Speaking of the trigger, you will not have to take it to a gunsmith or shell out for an aftermarket replacement. It is a good trigger. The one on my rifle broke at 31Â¿Â¿2 pounds, which is just about perfect. It’s clean and crisp, and while it will not compete with the very best bolt-action triggers, it is perfectly fine, which is almost unheard of for .22 autos.

Even the magazine is different. It holds five rounds of .22 Long Rifle ammo, but unlike most other box magazines, which are made of sheet metal, the T/C is a massive little brick of

steel slabs, held together at the bottom by a plastic collar. The magazine can be disassembled for cleaning, and it should be just about immune to damage.

The sights are unusual. They consist of a steel front ramp with a red fiber-optic bead, and a fully adjustable rear semibuckhorn with a green fiber-optic bead on either “horn.” When you sight the T/C Classic, you see a red bead bracketed by two green beads. The system is highly visible, very fast, and surprisingly precise.

Shoots Good
But in the end, it’s accuracy that counts most. Shooting five-shot groups at 25 yards, eight different kinds of ammo (target and regular, standard and high velocity), I found that the Classic will group as well as all but the best bolt-actions and the most highly tweaked Ruger 10/22 autos. It shoots right along with my Anschutz 1416 bolt-action ($780) and almost as well as my New Ultra Light Arms .22 ($900). You will have to be a very, very good shot before you exceed what this rifle can deliver.

Because most kids learn on .22s, Thompson/Center has designed a couple of very intelligent features. First, you can convert the Classic to single-shot operation to teach that it’s the first shot that counts, and that rappid fire is the crutch of the incompetent. Second, the rifle comes equipped with its own mini padlock, which fits through a hole in the rear of the trigger guard. When the lock is in place, the rifle is inoperable.

But Is It Perfect?
Nope. If it were mine, I would have the cheesy plastic butt plate replaced with a nice nonslip rubber one. And there is the matter of cleaning. It is the practice among the unenlightened never to clean .22s, and with some guns, you can get away with it. But this is not the way to go with the Classic. Because the working tolerances are close, and because T/C uses a tight, semimatch chamber, and because a semiauto action lacks the feeding force of a bolt, or lever, or pump, if you don’t keep the

rifle clean you will experience jams. Once every couple of hundred rounds, take the barreled action out of the stock and disassemble the action. (T/C gives you directions.) It takes only a few minutes. Then clean out the barrel using solvent and a bronze-bristle brush — none of this single-oily-patch nonsense. For cleaning the carbon, grease, and other assorted crud from the receiver, bolt, operating spring, and spring guide, I recommend KG 1 Carbon Remover, available from KG Systems (800-348-9558). It works extremely well and has practically no odor. Then leave the action dry. No oil.

The final fault of the Classic is the cruelest. Like all .22 autos, it spits out tiny pieces of brass and unburned powder when it ejects a spent round. This is not a problem for right-handers, since it all goes whizzing past your head, but left-handers catch it right in the face. As the Roman historian Pliny the Elder observed in 79 a.d., Via sinistrum dura est. For those of you who are not Latin scholars, that translates as “The way of the southpaw is hard.”

Notwithstanding, the Thompson/Center Classic is just that — a blend of grace, accuracy, and mechanical excellence that is scarce at any price, and at this price, damn near unbelievable.