Shooting a side-by-side can be a revelation to hunters raised on tall, bulky repeaters and over/unders. Horizontal doubles simply feel like the instinctive arms smoothbores were meant to be. 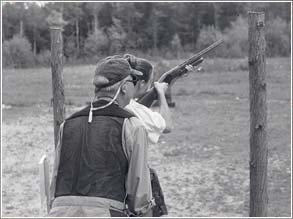 The classic side-by-side double is a shotgun pared to the essence, little more than a stick that shoots where you look. Shooting a side-by-side can be a revelation to hunters raised on tall, bulky repeaters and over/unders. Horizontal doubles simply feel like the instinctive arms smoothbores were meant to be.

Sadly, the side-by-side’s popularity in this country peaked well before World War II. Pumps and autos cost less and held more shells. In the ’50s and ’60s, o/u’s supplanted side-by-sides as our favorite two-barreled guns. Competitive shooters believed the o/u’s narrow sighting plane helped them hit more trap and skeet targets, and hunters bought what the champs were using. As a result, many American shooters have grown up thinking of side-by-sides as either cheap imports from countries with dubious gun-making traditions or the five-figure-price-tagged playthings of rich men in tweed pants.

Lately, a growing number of hunters have rediscovered what a smart few have known all along: In the hunting field, where targets rarely follow a predictable path, the side-by-side’s broad expanse of barrels and trim lines helps you get on target right now. And they look way better than repeaters and o/u’s do, too. Who knows? Perhaps a sleek side-by-side can unleash the efficient inner predator lurking beneath your bumbling exterior.

New Guns
I keep waiting for an American maker to come up with a classic side-by-side with the price point and quality of the typical “entry-level” o/u. In the meantime, one new gun worth a look is FABARM’s Classic Lion, a 12-gauge imported from Italy by Heckler & Koch (703-450-1900). At 7 pounds, my test gun was a shade heavier than a side-by-side game gun need be, but it was stocked with lovely satin-finished walnut. The price, with double triggers, auto ejectors, choke tubes, and a hard case, is a most reasonable $1,499. Another solid option is SKB’s (800-752-2767) 385 series, which harkens back to the neat Ithaca/SKBs of the ’70s. Prices start at $2,049.

Used Guns
Side-by-sides move briskly off used-gun racks these days. However, there are plenty of American Foxes, L.C. Smiths, Lefevers, Parkers, and Winchester 21s in circulation. Although many command prices much higher than most of us will pay for a shooter, guns like the Fox Sterlingworth or Lefever Nitro can still be found for a reasonable sum. Don’t snap up an American double without a critical look; many guns made before 1930 or so have much more drop in the stock than we are accustomed to. Guns from the ’30s and ’40s are usually stocked closer to modern dimensions. Some of the 16s have short chambers, although having them lengthened to 23Z?4 inches is no big deal. (It’s best, however, not to lengthen the 21Z?2-inch chambers found in some English guns. Buy short shells instead.) Avoid Damascus or twist barrels, as they are unsafe with modern shotshells.

Some of the best affordably priced side-by-sides on the used market are the Asian imports from the ’70s and ’80s, when the side-by-side enjoyed a modest resurgence. The SKB 100, 200, and 280, and Browning’s BSS, all sell in the $800 to $1,500 range. The BSS Sidelock, Winchester Model 23, and Parker Reproduction cost more but make great bird guns. Unlike old American and many European doubles, most Japanese side-by-sides are steel-shot-friendly. European names to look for include Zoli-Rizzini and Poli from Italy; Bury and Dumoulin from Belgium; Webley & Scott and Hussey from England; Kettner and Sodia from Austria; and Simson and pre-war Merkels from Germany. Shop around and you can find a shooter in any of these makes in the $2,500-and-under range.

Finally, if you’re buying a used double to hunt with, don’t be afraid to add a recoil pad, have the stock bent, the chokes opened, or even choke tubes installed, unless the gun is in mint condition and has value to a collector?altering it in any way will destroy that value.

How to Shoot Them
When you mount a side-by-side correctly, you see more barrel than you do with other types of guns. On first impression, you feel as if you’re looking down a stretch of highway. However, you don’t have to shoot a side-by-side differently than any other upland gun just because it lacks a narrow sighting plane. Focus on the bird’s beak, and you’ll be aware of the barrels only as a broad blur beneath the target.

The splinter forearm on classic game guns is there to hold the gun together, not to hold on to. The Brits, in fact, keep their left arms nearly straight, grasping the gun by its barrels. Wherever you hold the gun, you’ll have to lay your thumb along the barrel in a way that it doesn’t impede your view. Invest in a glove or a leather handguard to insulate your fingers from the hot barrels if you plan to shoot your double on the skeet range or in the dove field.

Double triggers take some getting used to, but once you’ve mastered them, they are the only selector system that truly offers instant choice of choke. Shoot double triggers for a little while, and you’ll find yourself reaching for the back trigger on long shots without conscious thought. Look at the grouse or quail; swing the gun. The bird will never know if your barrels were over and under or side by side.