Time was, if you wanted to change chokes you needed extra barrels for your gun. Now you unscrew one choke tube and thread in another. 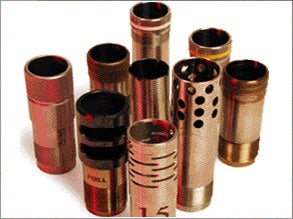 Time was, if you wanted to change chokes you needed extra barrels for your gun. Now you unscrew one choke tube and thread in another. Interchangeable chokes allow the same gun to sling clumps of shot as small as a pie plate at 40-yard turkeys one day and patterns as big as a washtub at close-cover woodcock the next. No question; choke tubes rate as one of the Good Things of modern life.

While tubes have only attained widespread popularity in the last 15 years, the idea of interchangeable chokes is nearly as old as choke boring itself. Tinkerers have experimented with choke-tube designs for 100 years. A few of their inventions, like the horrendously ugly Cutts Compensator and the Poly-Choke, enjoyed considerable popularity for a good part of the last century. Winchester introduced its WinChokes — choke tubes as we know them — back in 1969, and Seattle gunsmith Stan Baker began fitting guns with his own screw-in chokes in the 1970s. By the mid-80s, choke tubes became standard on most factory guns. Today it’s difficult to buy a fixed-choke gun.

A Pocketful of Barrels
Originally, choke tubes were marketed as “a pocketful of extra barrels,” the selling point being that you could carry a set of tubes into the field, switching chokes quickly as conditions warranted. Sporting Clays shooters have embraced the concept wholeheartedly (some obsessively), but I’ve only encountered a few hunters who actually change tubes during the course of a day’s hunt. On the other hand, interchangeable tubes mean that one gun can handle all my waterfowling, from decoying ducks to pass-shooting geese; and that I can pack one gun and a selection of chokes if I’m traveling somewhere to hunt waterfowl in the morning and upland birds in the afternoon.

Tubes have changed shotgunning profoundly by freeing us (and choke makers — more on this in the February issue) to experiment with chokes.

Testing different constrictions back in the days of fixed chokes meant switching guns or barrels or having custom choke work done. Changing and testing chokes back in the days b.t. (Before Tubes) was nowhere as easy as now. Tubes leave you no excuse not to fine-tune your gun’s performance at the patterning board.

With a few choke tubes and a roll of butcher paper, you can put some of the chestnuts of conventional shotgunning wisdom to the test. Why believe people who tell you a Full choke won’t pattern steel BBs? Try it yourself and see. Despite what you’ve heard, some Full chokes shoot BBs beautifully.

Twist in a pure Cylinder tube and pattern it with small shot at 20 yards. You won’t see a “blown” pattern. Instead, you’ll find that Cylinder throws a game-getting net of pellets at the range where most upland birds are killed. Owners of two-barreled guns can experiment with outrÂ¿Â¿ combinations such as Improved Cylinder and Full — what I use for pheasant hunting with my 28-gauge — or Cylinder and Light Modified for close cover.

Love Your Tubes
The price of scattergunning progress is a little extra maintenance. Choke tubes collect more wad fouling than do fixed chokes. Simply leaving the choke in the barrel when you wipe out the bore won’t remove the melted plastic that accumulates around the base of choke tubes. The easiest way to clean a tube is to dunk it in solvent overnight. Birchwood Casey (800-328-6156) and Briley Manufacturing (800-331-5718) both sell choke-sized jars of solvent for exactly this purpose.

If you use the same tube all the time, take it out at least once a month and soak it overnight. If your gun gets wet in the marsh, be sure to remove the choke and clean it. A tube that rusts in the barrel may never come out. There’s no need to crank tubes as if they were lug nuts; just snug them down with a choke key, and after a round or two of clay target shooting or a day in the field, check them and tighten them up again if need be. Choke tubes are fragile. If you drop a tube and ding the bottom, it’s probably not safe to shoot. Take it to a gunsmith.

Grease makes the best choke lube. Unlike oil, the many choke-tube greases on the market won’t evaporate or migrate out of the threads. Grease also serves to dampen the vibration in the threads when the gun goes off, serving to hold tubes in place as well as keep them from sticking. The best choke-tube lube on the market is made by Birchwood Casey. It comes in a little white tube and makes glorious stains on clothing. Most gun dealers carry it.

Choke tubes make a shotgun far more versatile than it would be otherwise; however, they may not be able to make it an all-around gun. A 26-inch barrel is great for snap-shooting at woodcock, but if you want to pass-shoot ducks, you’ll find that it does not give you the smooth, steady swing of a 30-inch barrel. Sometimes an extra barrel or two is not a bad thing.