Good idea or not, it's more doable now. 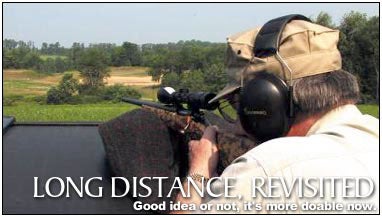 I’ve gone on record any number of times that I regard long-range shooting in the same way as I regard beriberi, wet kindling, and Congress. But this month, I must choke back my opinions and report on it, because there are some new tools available that make shooting at a distance less of a desperation gamble and more of a science. Those tools are two new scopes with range-finding reticles. One is from Cabela’s, the other from the Austrian firm of Kahles.

I was introduced to the Cabela’s scope via John Lazzeroni, maker of very powerful and very costly long-range rifles. Lazz, the all-wise and all-compassionate, realizes that not everyone has $4,900 for one of his Mountain Rifles and the Schmidt & Bender range-estimating scopes ($1,200) that he recommends for them, so he has had Savage make a special run of Model 116 stainless-steel rifles chambered for his short, fat 7.82 Patriot (.308) cartridge. Designated Savage 16LZ, these guns sell for the warm, fuzzy price of $649.99 right-handed and $749.99 southpaw.

Lazz supplies the 16LZ with a Cabela’s Alaskan Guide 3.5XÂ¿Â¿Â¿10X riflescope, equipped with Cabela’s own range-finding reticle. The scope is $330 (either from Lazz or direct from Cabela’s), and Lazz will mount and boresight it for you for $75. For $200, he will take it out to the range and sight it in at 300 yards, the distance he recommends.

Magic Circles
In my part of the country, it’s a real challenge to find someplace you can shoot at more than 100 yards, and the best I could do without driving for a couple of days was a 400-yard range, which is still plenty long. I would have liked to report that the rifle and scope combination did not work and that you should stick to 300 yards and under. This was not the case. The system worked very well.

For openers this is a very, very good scope for $330. How Cabela’s does it at that price, I don’t know, but its optics and adjustments lack for naught. The range-finding reticle is based on a design Herter’s offered back in the 1960s. It consists of a medium crosshair with a large circle around the crosshair’s intersection; this is the aiming point for 100 and 200 yards. The circle subtends, or covers, 18 inches, which is the average size of a big-game animal’s chest cavity. So, if you hold that big circle on a deer’s chest and the chest fits neatly inside, you know the critter is at 200 yards.

To the left and below the 100/200-yard circle is a smaller circle that subtends 18 inches at 300 yards. And running through its center to the vertical crosshair is the 300-yard wire. The 400-yard circle and wire is low and to the right, and the 500-yard is low and in the center. It’s a simple system. See which circle fits the critter’s chest, aim using the appropriate crosswire, and shoot.

Real Life
Because of the extreme velocity his cartridges generate, Lazzeroni uses a different zeroing system than Cabela’s. Lazz recommends that you sight in the rifle using the 300-yard crosshair, and get it to hit dead on at that distance. That way, you are an inch or so high at 100 and 200, and the reticle will compensate for bullet drop at 400 and 500.

And that’s just how it works. I found that at 100 and 200 yards, the bullets hit in one group 2 inches high of center; at 300 they were dead on; and at 400 they hit 8 inches high, which was not supposed to happen. The reason, which occurred to me after a while, was because I was shooting downhill, and at 400 yards I should have held lower than I did. I found that holding on the bottom of the 8-inch bull put the bullets in the black.

The Kahles scope, a 3XÂ¿Â¿Â¿9X selling for $665, utilizes the TDS Tri-Factor Reticle System, a system of range and wind compensation developed by competitive shooting coach T.D. Smith and licensed to Swarovski, which owns Kahles. The system consists of a Duplex-style reticle and four stadia wires positioned on tthe lower crosshair. According to Kahles, the scope can compensate for bullet drop out to 900 yards, depending on how you zero it and on the velocity of your bullet. (The system itself is simple, but the instructions occupy an entire pamphlet and are written in such dense and impenetrable English that you must resist the urge to burst into tears when you first read them. Be brave and persist. If I can figure it out, so can you.)

I mounted this scope on my tried-and-true Ultra Light Arms 7mm Weatherby, which has been my choice for a long-range round for many years. I sighted it in 11/2 inches high at 100 yards and found that the shots at that distance, and at 200 yards, went into the same group. At 300 yards, the bullets were hitting just about dead on. At 400, just as with the Lazz rifle, they were high, and holding on the bottom of the bull cured the problem. There was also a strong left-to-right wind, and the TDS system compensated for that, too.

Based on two days’ shooting with the two scopes, and upon my previous shooting at game at long range, here is what I learned:

And a Final Consideration¿¿¿
You can, if you are a good shot and have the right equipment, kill game at ranges that would have been unheard of a few years ago. There’s no doubt it can be done. The question is, should it be done? That’s a question you’ll have to answer for yourself.