'Tis the season to tie up loose ends of all sorts. 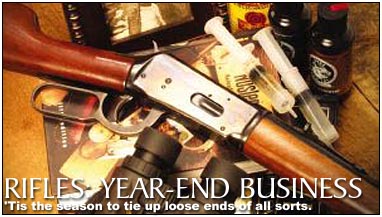 This seems a good time to report on various worthwhile stuff that did not make it into print here during 2002, thus allowing me to enter 2003 with a clean slate and a more or less clear conscience.

Nikon Venturer LX Binoculars. The original Venturer binoculars won a Best of the Best Award even though they were large and quite heavy. Despite the bulk and heft, they were superb glasses. The new LX models, which come in 8×32 and 10×32, are just as wonderful but much smaller and lighter. The list price for the Venturer LX glasses is $1,100. The real-world price is $699 for the 8X and $799 for the 10X, and for that kind of money they are a bargain. Binoculars do not come any better than these.

The Winchester Model 94. In the June issue, in an article entitled “Five Classic Deer Rifles,” I included the Marlin Model 336 lever action and the Savage 99 lever action but neglected to mention the Winchester Model 94 lever gun. For this, a number of readers called me all sorts of bad things, and they are absolutely right. I’ve always thought the Marlin and Savage levers were better guns than the 94, but that was no reason to leave it out. If the Model 94 is not a classic deer rifle, I don’t know what is. Forgive; oh, forgive. Sharps Shots. In the April Rifles department, I mentioned a legendary shot made by a buffalo hunter named Billy Dixon, who allegedly killed a Comanche Indian at Adobe Walls, Texas, with a .50/90 Sharps rifle at close to a mile. After the battle, Dixon supposedly returned to Adobe Walls with an Army surveyor, and the distance from Sharps muzzle to Comanche was measured at 1,538 yards.

Since that department appeared, a number of readers have been kind enough to send me reprints of an article written by Mike Venturino on some high-tech tests that revealed the capabilities of the old Sharps. In case you’re not familiar with Venturino’s writing, he knows more about blackpowder-cartridge guns of the Old West than anyone else.

In 1992, Venturino was approached by a group of scientists who worked at the government proving grounds at Yuma, Arizona, and who were interested in the capabilities of the Sharps buffalo rifles. One of them had written a paper stating that Dixon’s shot was impossible, because a .50/90 Sharps could not hurl a bullet over 1,500 yards; and because these gentlemen had access to some highly sophisticated radar that could track a bullet in flight from muzzle to fall, they wanted to find out what the truth was.

The scientists figured out that if you elevated the muzzle 4.5 to 5 degrees, the .50/90 would send a bullet 1,517 yards, just about the distance of Dixon’s shot.

Did Dixon do it? He himself said it was luck. But the radar said it certainly was possible.

Greasing the Way. Over the course of the year, I’ve used a number of very good gun-care products. They are:

New Manuals. The Nosler Reloading Guide is now in its fifth edition, and No. 5 has heft, authority, and funk. It lists loads for 105 cartridges, including just about every factory round, wildcats, the new shortfats, and even proprietary cartridges like the excellent Dakota Magnums. Each listing is accompanied by commentary from a gun writer (or person of similar integrity) who has used it extensively. It’s invaluable, informative, entertaining, and sells for $24.95 at gun stores. A deluxe edition, complete with slip jacket, is available for $49.95 from www.nosler.com.

Swift is a much newer company than Nosler, but its reputation for peerless projectiles is without parallel. The company’s Reloading Manual Number One is something of a departure for the genre. It’s almost a coffee-table book, printed in a wide format, elegantly designed and laid out, and filled with beautiful illustrations of North American and African game by artists Bernie Jensen and Larry Norton. Even if you don’t handload, you can buy it for the art. The price is $29.95 from suppliers such as Cabela’s or direct from Swift at 785-754-3959.