Getting pounded doesn't have to be part of your shooting experience. 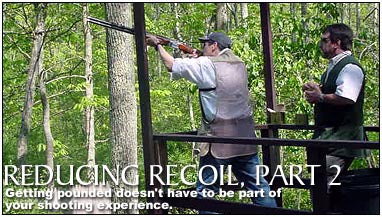 Earlier this year, Heckler & Koch took a few of us to a fancy lodge near Dallas where the air was filled with flying targets from the instant we got there to the minute we left. We shot wobble trap, pheasants, quail, and chukars in the morning, followed by five-stand and sporting clays at midday. Ten minutes into the afternoon’s flighted duck shoot I was wincing with every shot. I put down the over/under I’d been using all day, picked up an autoloader, and just like that, pulling the trigger was fun again.

Everyone shoots better when they’re not getting kicked. That’s why target shooters, and especially trapshooters, those most masochistic shotgunners of all, support a cottage industry in recoil reduction devices. Although recoil reducers don’t actually reduce free recoil (as I pointed out last month, you can decrease the recoil energy only by shooting lighter or slower loads or a heavier gun), they do lessen felt recoil. If your bird gun bites, consider the following fixes.

Switch to an Autoloader
Gas autoloaders make the best recoil reducers of all. An auto bleeds off some of the expanding gases out of the barrel and puts them to work cycling the action. Therefore, the moving parts of the gun store some of the recoil energy for a fraction of a second. You still absorb the same total amount of free recoil, but it’s divided into two or three successive smaller kicks and the reduction in kick is remarkable-up to 40 percent. Not all gas guns reduce recoil equally. I have an old Smith & Wesson 1000 that pounds me. The H&K;/Fabarms Lion I shot in Texas, however, kicked like a down pillow. Remington 1100s and 11-87s remain the softest-shooting gas guns I have tried. The recoil-operated Benellis feel softer than fixed-breech guns, at least to my shoulder, although they don’t reduce recoil as dramatically as do gas guns.

Add a Pad
Guns generally come from the factory wearing hard, unyielding wedges of rubber on the butt. Such pads are easy to grind to shape and install on the assembly line, but they don’t provide much cushioning. Two excellent shoulder-saving aftermarket pads are the Kick-Eez (417-649-2100) and Pachmayr Decelerator (800-225-9626), both made of a soft, resilient compound called Sorbothane. Of the two, the Kick-Eez probably reduces recoil a little more, while the Decelerator looks better. All Kick-Eez and most Decelerator pads must be installed and ground to shape by a gunsmith, a job that costs $30 to $75.

Pachmayr also offers prefitted Decelerator pads for several popular guns that you can install with a screwdriver in a few minutes. I put one on a Mossberg 500 that fit very nicely, another on an 870 Express that fit well enough for a bottom-of-the-boat gun, which mine is. If you’d prefer not to alter your gun-say it has a fine, hand-checkered buttplate-one option is the thin, effective Past recoil shield (877-509-9160) that straps onto your shoulder.

Barrel Modifications
Folks who have forcing cones lengthened and barrels backbored are usually high-volume dove or target shooters who need every little bit of recoil relief they can get to survive long days on the 16-yard line or in South American dove fields. Lengthening the forcing cones (the taper between the chamber and the bore) and enlarging the main bore gives the shot charge a smoother ride down the barrel, lessening the jolt of recoil and also improving patterns. Many factory guns now come with barrels bored to larger than standard diameter. Barrelsmiths like Briley (800-331-5718), Seminole Gunworks (800-980-3344), and Ballistic Specialties (800-276-2550) backbore guns for $150 or more per barrel and lengthen forcing cones for $50 to $75. Although your patterns will definitely look better, the reduction in recoil is fairly subtle. You may or may not feel significant difference over the course of eight or 10 shots a day in the field.

Porting>
Ports-holes machined in the barrel to suppress muzzle jump-can tame guns that smack you in the teeth. I find ported barrels very effective in cutting recoil to my face, although I’m not yet convinced that ported choke tubes work. Pro-Port (586-469-7323) originated shotgun porting, although now you can choose among several barrel-porting designs-Ballistic Specialties’ Angle Ports, Briley’s Ultraports, and many others. Porting costs under $100 per barrel and seems to me the perfect addition to any dove gun.

Recoil Reducers
Most recoil reducers take the form of a cylinder that fits into the bolt hole of your stock. Some models replace magazine plugs or caps. All of them increase gun weight and therefore reduce free recoil. They achieve further kick reduction by means of either a spring-loaded weight or slow-flowing mercury filling that counteracts recoil. C&H; (888-324-5445), to name one manufacturer whose reducers I’ve used, makes models to fit almost any gun. A recoil reducer does alter the balance of your gun somewhat because it adds 1/2 to 3/4 pound to the stock.

Having inflicted 31/2-inch magnums on us, manufacturers are trying to soothe our pain by installing recoil reducers in some new guns. Beretta’s Xtrema auto comes with a spring-loaded reducer (you can feel the gun bounce off your shoulder like a pogo stick when you shoot it, but it doesn’t kick much). Benelli’s Super Black Eagle has a stock-mounted mercury suppressor as standard equipment.

Earplugs
Finally, much of what we perceive as kick is a perfectly normal reaction to a loud explosion going off 3 feet from our ears. Turn down the volume and you might discover your hard-kicking gun isn’t so scary after all. I always wear some kind of earplugs in the field, and you should, too, especially in the dove field and the duck blind. At 50¿¿ a pair, foam earplugs are the most cost-effective recoil reducers of all.