A 20-gauge will get you the bird, minus the migraine. 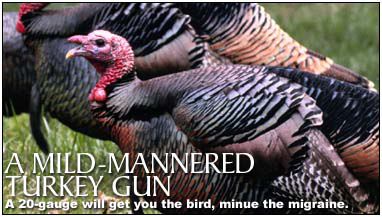 The turkey wormed his way under a fence and trotted 500 yards across a cornfield in 10 minutes on the last day of the season. My young friend Nathan, 13 years old and on his first turkey hunt, knocked the gobbler flat. Why don’t turkeys act like that when I have the gun?

I put the question to a friend who possesses a deep understanding of turkey behavior. “It’s karma,” he explained. “Big gobblers love to be killed by women and children.”

Add good karma to the list of reasons to take a novice hunting this spring. Here’s another: new 20-gauge guns and loads that are easy on beginners and tough on turkeys. They’re lighter to carry and softer to shoot than 12s, yet the right gun-choke-load combination can deliver enough pellets to kill cleanly at reasonable ranges.

There’s good reason why two of these three guns wear supersoft recoil pads. Shooting a light 20 with 11/4-ounce loads can sting, although it’s nowhere as painful as touching off 13/4- or 2-ounce loads in a 12. Also notice that both the Remington and the Ithaca have full-size adult-length stocks. These guns aren’t only for kids; they’ll appeal to anyone who’s tired of lugging a big gun through the woods and suffering on sight-in day.

Twenty-gauge turkey chokes were once rarer than turkey teeth but are now available both on factory guns like the three above and as aftermarket accessories. I used a Hunter’s Specialties Undertaker in my pattern testing. Rhino’s .575 choke tube is highly regarded among National Wild Turkey Federation Still-Target competitors.

How Far?
Properly choked and loaded, the 20-gauge can kill turkeys just as dead as the 12 can at the ranges where turkeys should be shot. Nathan took his gobbler at 28 yards with my 23/4-inch 20-gauge 1100 and the Undertaker choke. After patterning the gun with Winchester’s Supreme 1-ounce, high-velocity 6s, I pronounced it a 25-plus-yard turkey killer. And Nathan has the fan, beard, and spurs to back me up. Go to a 3-inch gun and you extend your maximum range.

Range Results
Last fall, I spent an entire day at the bench shooting turkey targets with a 3-inch 20 (try that with a 12 and you’ll wind up in traction). At 25 and 30 yards, both Winchester’s 11/4-ounce Super Double X Supremes and Remington’s 11/8-ounce Hevi-Shot Nitro Magnums plastered the heads and necks of my turkey targets with around 40 holes. Although lead and Hevi-Shot performed equally at those ranges, the superior density of Hevi-Shot produced much better patterns when I set the targets at 35 and 40 yards. I like to see a minimum of 16 hits above the feather line in a turkey target. By that standard, both loads are lethal out to nearly 35 yards, with Hevi-Shot holding an edge over lead in pellets on target.

These loads may be potent, but they don’t make a 20-gauge into a 12. Twelve-gauge lead loads easily outscore the best 20-gauges when it comes to putting holes in paper targets at 40 yards. In 15 years of turkey hunting, however, I have yet to take a shot over 37 paces, and the average shot has been closer to 25 yards. At those ranges, the 20-gauge can deliver the only hole we’re interested in punching: the one in our tag.