Revolutionary ammo means the animal gets walloped, not you. 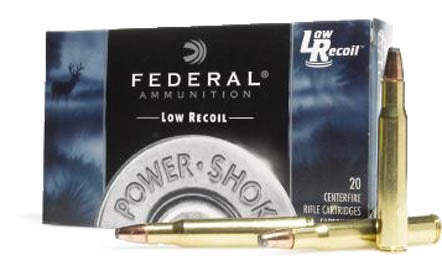 I first got an inkling that recoil was not good for you in 1973 when I met Ned Lilly, a Hall of Fame trapshooter. At that time he had been smashing clay birds for 40 years and had fired over a million rounds. As a result of all that pounding, he said, he was unable to turn his head anymore, so arthritic were his neck and shoulders.

Over a long period of time, recoil wrecks backs and necks and detaches retinas, and in the short term it can do a pretty fair job of turning you into a lousy shot, because it’s against human nature to hold steady when you know you’re about to get walloped. So in this era of dill pickleÂ¿Â¿Â¿size cartridges, it is heartening to see Remington and Federal come out with big-game ammo that is loaded to kick less-lots less.

DIFFERENT MEANS, SAME END
The two companies went about the same job in somewhat different ways. They wanted ammo that (a) would reduce recoil by 50 percent; (b) would not require rezeroing your rifle; and (c) would be effective out to 200 yards. To achieve this, the two companies use light charges of fast-burning powder, and both have developed special bullets that are designed to expand reliably at low velocity. The samples that I tested were in .30/06 (other calibers are forthcoming). Remington calls its ammo Managed Recoil, and Federal has labeled theirs Power-Shok Low Recoil.

Assuming your ’06 is sighted in 2 inches high at 100 yards with standard-velocity ammo, you’ll find that these bullets print about 3 inches lower, which means you don’t have to rezero provided that you keep your shots within 200 yards. Your rifle, of course, may not have read this, so it’s best that you check your actual point of impact before you go hunting.

I tried out the Managed Recoil loads in three different ’06 rifles and found that accuracy was uniformly excellent. The Low Recoil ammo got a workout in only two guns, but its accuracy was simply phenomenal. According to a Federal engineer, this is not unusual, but as to why it is so accurate, they have no idea.

I DON’T FEEL YOUR PAIN
But all this is merely numbers. The real question is do these cartridges hurt less than standard ammo? I am not the best judge of recoil anymore, so I ran a test with assistant editor Kim Hiss, who is a new rifle shooter and free of prejudices. I had her fire alternate rounds with two identical rifles, one a .30/06 using the new Remington and Federal ammo (she did not know which was which), and the other an anemic-kicking 6.5×55. Kim couldn’t tell the difference-until I slipped a standard ’06 into the chamber.

DAWN OF A NEW AGE?
It just may be that with the increasing number of women entering the hunting and shooting sports, we will begin to see some rounds with less and less recoil. Women are more sensible than men, and they are not going to accept a high pain threshold as a requirement for their hobby.

Here is something else to consider: As I am typing this, my left leg feels as though it is being squeezed in a vise. It has felt like this since May 1987, when I took three shots with a very, very powerful rifle and one of my spinal discs moved to where it shouldn’t be. I will die in this condition. Consider that when you discount the effects of recoil.