The Science of Shooting Deer 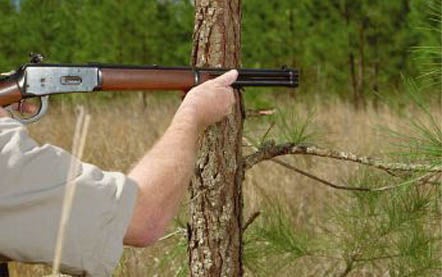 It looked easy, but it wasn’t. The scenario was a familiar one: You see him; he sees you. He knows just what the game is, and you have a couple of seconds to shoot before he gets the hell out of there. Kenny Jarrett set up a deer target in a canebrake field, and we stood, 65 yards away, gun down as in sporting clays. The object was to hit the vital zone with three shots. Jarrett stood behind the shooter whose turn it was, with a special timer that buzzed. At the signal, we would shoulder the rifle, aim, and fire. The sound of the shot stopped the timer. Jarrett would record the time, and we’d wait for the next go-ahead buzz.

For this event I picked a Marlin 1895 Guide Gun in .45/70, topped with a Leupold VXII 1XÂ¿Â¿Â¿4X scope and loaded with Garrett Ammunition super-hard-cast 415-grain flatpoint ammo. Boddington used a Winchester Model 94 Trapper, chambered to .30/30 and fitted with a Lyman aperture sight. His ammo was Winchester 170-grain flatpoints. Simpson went with a Remington Model Seven in .308 Winchester mounted with a 1.5XÂ¿Â¿Â¿5X Bushnell scope. It had a custom heavy-taper 20-inch barrel and was such a fine-pointing gun that I thought of stealing it. However, the bolt handle was on the right side, so I didn’t. His ammo was Remington 150-grain Pointed Soft Point. Van Zwoll chose a Weatherby STS semiautomatic 12-gauge with a rifled slug barrel. His scope was a Bushnell 1.5XÂ¿Â¿Â¿4.5X, and he used Winchester Platinum Plus slugs.

The average amount of time it took us to get off a shot was 2.37 seconds, and we all did so at just about the same speed. As far as accuracy goes, the results were depressingly uniform-a total of four hits out of 12 shots. We then paused to eat crow, followed by a heaping helping of humble pie for dessert.

Relying on our collective wisdom, we recalled the following: Closer is better; and if you think you’re aiming and you’re not, you’re going to miss. What we had been doing was falling into one of the oldest traps of all-not aiming at a specific spot on the deer but, instead, shooting the instant the sights were in the general vicinity of the vital zone.

Humbler and wiser, we closed the distance to 40 yards and vowed to concentrate not so much on the clock as on hitting. The results were shocking: The average time per shot was exactly the same as before-2.37 seconds-but now, we scored 11 hits out of a possible 12.

What We Learned
Our improvement, we agreed, came from forgetting about the damned timer and concentrating on the sights-and from the 25-yard reduction in distance. Wyatt Earp said it all years ago: Get your gun out of the holster just as fast as you can, and then take your sweet time aiming.

Recommended Guns
If you want to shoot fast, you need a deer gun-something short and light that points quickly. It’s worth noting that Boddington and I both used short-barreled lever actions, and I don’t think you can pick better guns for this type of work. Simpson’s little bolt action, although short-barreled, was notably barrel-heavy. Although it might not have pointed quite as quickly as a lighter rifle, once you got it on target it stayed there.

As for scopes, you don’t need a lot of power-4X is plenty. And if your eyes are good enough, a good peep sight with a big aperture works fine. Little peeps are for target shooters only. It is not only helpful but necessary to have the scope positioned so that you don’t have to waste time looking for the image, and it is distinctly unhelpful to rely on complicated reticles that don’t allow you to aim instantly.