Think of this SHOT Business Magazine roundup of the year's new handguns as a preview for the 2006 SHOT Show. And keep an eye on this article: When David E. Petzal visits the show (Feb. 9-12) he'll be posting on-the-spot reviews of these guns. 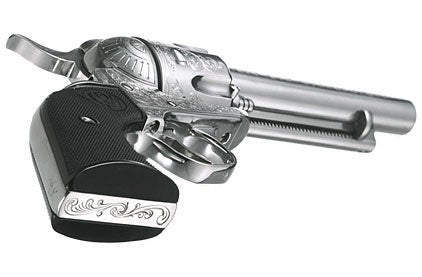 Freedom Arms Model 83
**
As one of the premier single-action revolvers on the market, the Model 83 remains in great demand. This year it will be chambered for the .500 Wyoming Express, a straight-walled .50-caliber cartridge designed for 350- to 440-grain bullets.

Weatherby Mark V CFP
**
Based on the Mark V bolt-action, the new Mark V Compact Firing Platform (CFP) should appeal to varmint and big-game hunters. The CFP features a 16-inch chrome-moly, target-crowned, button-rifled, No. 2 contour barrel. The action is pillar-bedded into a Fibermark composite stock. The 27.5-inch, 5.25-pound CFP is drilled and tapped for optics.

Ruger New Vaquero
**
The New Vaquero’s Old West look and modern mechanics made it an instant hit with single-action revolver fans. This year Ruger is going to let folks really dress up the Vaquero. The Ruger Studio of Art & Decoration will be offering engraved Vaqueros as standard items in 2006. These handguns are cut engraved (not plated or etched), with extensive patterning on the cylinder, frame, barrel and grip. They can be ordered singly or as a consecutively numbered pair (for an extra charge).