So your rifle won't shoot into a dime? Not to worry. 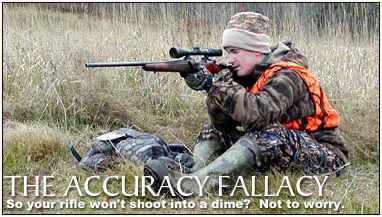 In the summer of 1975 I was in London and visited the shop of Holland & Holland, gunmaker to royalty, nobility, and people with lots of money. I didn’t qualify on any of those counts, but they were civil to me anyway until I watched one of their newly made bolt-action sporting rifles being checked for accuracy. The tester sat down, put his elbows on a table, and shot with no other support.

Having been raised on the sacrament of the benchrest, I was aghast and asked what kind of accuracy was expected of these multithousand-dollar rifles.

“Our customers,” came the icy reply, “have always found our rifles’ accuracy to be quite adequate.”

** It’s All Relative**
In the fullness of time, I’ve come to realize that the Holland & Holland salesman was right. His customers were paying for a handsome, finely made rifle with Holland’s unique cachet, period.

It’s only in the last 15 years that we have seen the emergence of big-game rifles, both factory and custom, that can put three shots into an inch at 100 yards with regularity. Before that, it was an astounding thing for a rifle to do. Now it’s so routine that people have come to expect it. And there is no shortage of big-game rifles that will send three bullets into a lot less than a minute of angle.

Should you feel bad if your rifle won’t shoot dimes a football field away? Only if you want to hunt dimes. If you are a whitetail hunter who is never going to take a shot at more than 100 yards, a rifle that shoots 2- or 21/2- or even 3-inch groups will do just fine. A whitetail deer’s chest is a lot bigger than 3 square inches, and if you can hold a rifle steady, you will eat venison.

It’s only when you start shooting at longer ranges that the need for accuracy increases. At 300 yards, a 3-minute rifle will put three shots in 9 square inches. This is the best the gun is going to do, not even accounting for any of the many errors that can occur in the field. A minute-of-angle rifle will put three shots in 3 inches at 300 yards, which gives you a lot more leeway.

** Consistency**
You can get by with a rifle whose accuracy is less than sensational, but a rifle that is inconsistent will break your heart. “Consistent” means that it will put its groups (of whatever size) on the same place on the target all the time, hot or cold, wet or dry. If it won’t do this, you’re in trouble.

Warren Page, Field & Stream’s late, great shooting editor, had a test for consistency that he called “the one-shot group.” He would take a rifle to the range, fire a single shot, and save the target. He would repeat the process for the next 11 months. At the end of the year, he had a target with a dozen holes in it-12 one-shot groups. A good rifle would turn in a single ragged cluster, and that is what you want.

Beware of the rifle that “throws” shots. By this I mean a gun that will put two shots together and send the third astray. Sometimes this can be cured and sometimes it can’t. I’ve owned a number of very attractive rifles that threw shots and am pleased to say that they now belong to other people.

“Walking” shots is akin to throwing them, and it’s most common in light-barreled rifles. For three shots they’re fine, but then the barrels start to warm up and the groups migrate all over the target. This is a problem only if you are called on to fire more than three shots at a critter, and at ranges of more than 200 yards or so.

The Intangible Part
So why all the fuss over hairsplitting accuracy if it’s not vital? Because a rifle that will really lay ’em in there is a wondrous thing to own. It’s like having a knife sharp enough to shave with, or a dog that never misses a point. In a very real sense it does help your shooting, because it gives you confidence. The knowledge that your rifle can shoot down the neck of a Coke bottle at 100 yards will cause your chest to swell with pride, and you will shoot better as a result. In the end, that’s probably why people pay custom rifle builders megabucks for superaccuracy.

Years ago, a friend told me about watching a hunter in caribou camp sight in a rifle built by South Carolina accuracy maven Kenny Jarrett:

“He fired three shots out of that thing, and I swear they all went through the same hole. He picked up his brass and sort of swaggered back to the tent, and everyone else looked at their rifles like they’d been puked on.”

That man did not need half-minute accuracy from his gun to kill a caribou, but he had gotten his money’s worth nonetheless. Test Does Your Gun Shoot Straight? Here’s the way to measure a group accurately: You need a caliper (digital-readout calipers are much easier to use than dial-readout models) and the ability to subtract. First, measure the outside spread of the two widest shots in the group. Then, subtract from that figure the diameter of the bullet you’re shooting. Let’s say you take your .270 and shoot a group that measures 1.313 inches. Subtract from it .277, which is the actual diameter of the bullet, and you get 1.036 inches, which is your group size.-D.E.P.