A Blast From the Past

Flower power is passÂ¿Â¿, but magnum power is never out of style. 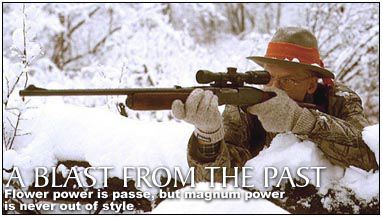 The ’60s was a decade of rude surprises. It was like waking up each morning and finding a wombat on your bed instead of the family cat. In the world of rifles, one of the strangest creatures to issue forth during the Age of Aquarius was the Remington Model 600 Magnum, which debuted in 1965. It was to other rifles of the time as Jimi Hendrix was to Perry Como.

The 600 Magnum had a chromed dogleg bolt-handle, a laminated beech and walnut stock, an 18-inch barrel with a nylon vent rib, and a nylon trigger guard. It weighed only 61/2 pounds and came chambered for two brand-new cartridges-the 6.5 Remington Magnum and the .350 Remington Magnum. The former was a silly and worthless round in a diameter that Americans have never really clutched to their bosoms; the latter, by the standards of the times, kicked.

Oh my, did it kick. When the 600 Magnum first came out, I took one in .350 Remington to the range, fired it once, put the rifle away, and went home. The 600 Magnum lasted only three years in production and then was replaced by the Model 660 Magnum, much more conventional in looks, which lasted until 1971.

The Retro Remington Shooters who actually hunted with Model 600 and 660 Magnums discovered that, in the .350 chambering, they had a very short, light, handy rifle that dealt a crushing blow. They also discovered that if the little gun hurt your shoulder, it would pound whatever was at the muzzle end much worse.

The folks at Remington have been aware of this for some time, and though the ’60s are gone forever, the original 600 Magnum is back in a much improved version, chambered again in .350 Remington Magnum and also in .300 Remington Short Ultra Magnum. It’s called the Model 673 Guide Rifle (Guide because this is the kind of rifle a big-game guide would carry-light, handy, rugged, and powerful), and it is some gun.

The beech and walnut have been replaced by a laminated beechwood stock, with some of the wood left its natural blond color and some stained a russet brown. Gone is the nonfunctional nylon rib, replaced by a nonfunctional steel rib. The medium-weight barrel is 22 inches long instead of 18, and the front sight ramp is now a distinctively shaped shark-fin blade. The 673 is based on the familiar Model 7 short action. Its weight is 71/2 pounds, and you would not want it lighter. The 673 is striking, a beacon of originality in a sea of black synthetic stocks and stainless-steel barrels.

The .300 Remington Short Ultra Magnum is a fine all-around cartridge, considerably easier to hit with at long range than the .350 Remington Magnum, but to me the .350 is by far the more interesting of the two. At any kind of reasonable range, it is devastating.

The original loadings for the .350 were 200- and 250-grain bullets, with the former being far more popular. Remington has dropped the 250-grain loading and now offers the .350 with a 200-grain pointed Core-Lokt bullet that departs the muzzle at 2770 fps. But these figures tell only part of the story: This round knocks stuff flat. To date, I have slain three wild swine and four deer with it. All three of the piggies (one a truly ponderous porker) and two of the deer never moved out of their tracks.

While the 200-grain loading will dump any deer directly, I would want a stronger slug for bigger animals such as elk, moose, and bear, and Remington is going to provide it. In midsummer, the .350 will be available with the 225-grain Swift A-Frame bullet, which can shoot through several redwood trees and slay a whale on the other side.