The bench reveals the accuracy of your gun. How accurate are you? 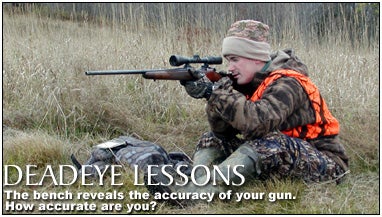 Accuracy is a measure of consistency. Anyone can hit a bull’s-eye once. Hitting it five times in a row shows consistency that breeds confidence. But confidence in what? If you shot from a benchrest, your job was not to disturb the rifle as you pulled the trigger. You played a bit part. If, on the other hand, you had to support the rifle yourself, hold it still, and time the shot, you were the main character.

It’s easy to shoot tight groups from the bench. That’s why most hunters use it so much (and why most shoot poorly from sitting, kneeling, and offhand positions). But chasing minute-of-angle groups that way is senseless for most hunters, because from hunting positions, you’re quite capable of missing targets the size of a small refrigerator. I have.

Once, at a sight-in day on a shooting range, I asked hunters who’d just zeroed their rifles to take one offhand shot at a 6-inch circle at 100 yards. More than 50 people fired. Only five hits showed up. The backing paper, 22 inches square, had just 30 holes.

Of course it’s a good idea to rest your rifle in the field, but if a stump isn’t handy, you’ll wish you’d practiced with that gun in your hands.

adventures in reality As you prepare for this hunting season, check your rifle’s zero by firing two three-shot groups. Clean the barrel and let it cool between strings. If both groups are centered at 200 yards (figure 21/2 inches high at 100), get off the bench.

Then practice for the field. Use paper targets because they show exactly where bullets strike. Distance isn’t important-your goal is to master the fundamentals of marksmanship: position, aiming, trigger control. Before you load up, find the rifle’s natural point of aim, and adjust your feet to bring that point of aim onto the target. Don’t pivot at the waist or force the rifle over with your arms. You can’t hold it perfectly still, so your object is to hold it where its constant movement is centered on what you want to hit. A sling, with a shooting loop that adjusts independently of sling length, helps with this.

In all positions, use bone structure to support the rifle. Muscles tire quickly, then twitch. Sitting and kneeling, keep the flat of your elbow against the flat of your knee. Offhand, your right elbow (if you’re right-handed) should be horizontal for a straight pull back on the grip and to open a pocket in your shoulder for the rifle’s butt. Keep the left elbow well underneath the rifle. Place the butt high enough for a straight-ahead aim. I typically take a couple of deep breaths before a shot, then let the third leak slowly as I put pressure on the trigger.

Trigger control is just a matter of applying pressure when the sight is on target, and holding it when the sight wanders off. It’s simple to explain, maddeningly difficult to do. Resist the urge to squeeze the trigger quickly as the sight dives toward the target. Follow through by holding the rifle for a second during recoil, and practice for follow-up shots by cycling the action right away.

I like to fire three-shot groups, one in each of the four positions: offhand, kneeling, sitting, and prone. Then I rest. Regular practice in small doses helps more than a long day at the range every two weeks. Keep your targets and assess your progress. As groups shrink, try to eliminate flyers. Dry-firing from field positions at home is a big help.

You might shoot a deer from a rest this fall. But to count on it would be to fantasize. So get real about your shooting. Now.