How Swede It Is

Easy on the shoulder, it's dodlig on big game. 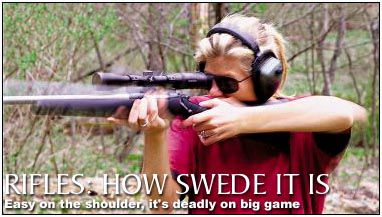 Many hunters are preoccupied with recoil, and a lot of the letters I get here at Wisdom Central ask if there isn’t a cartridge that will take big game reliably and not leave you walking in circles and drooling out of both sides of your mouth. I’m pleased to report that there is.

Its recoil might, with a following wind, dislodge a thrush from a thistle-but as I saw when I hunted in Sweden, ungulates of all sizes fell down smartly when shot with the 6.5, just as fast as they would if smacked with something that would take the turret off an M-1 tank.

The 140-grain bullet, which is the weight most commonly loaded in the 6.5, possesses a number of virtues. It is long for its diameter, so it has excellent sectional density (for good penetration) and a high ballistic coefficient (it retains velocity). Best of all, the bullets are backed by a light powder charge, so they cause very little recoil. In recent years, high-speed 6.5mm cartridges such as the 6.5/284 have caused riflemen who compete at long ranges to forsake their .30-caliber guns, because the 6.5s will do everything the .30s will but with less kick.

Factory 6.5×55 ammo is loaded on the mild side because there are many old military actions of questionable strength out there. The Federal 140-grain ammo that I’ve chronographed (which is exceedingly accurate, by the way) leaves a 22-inch barrel at just under 2600 fps. Handloaders can get considerably higher velocities.

On target Accuracy with the 6.5 is extremely good. The one I’ve been shooting, built by New Ultra Light Arms, weighs 61/2 pounds with a Swarovski 3XÂ¿Â¿Â¿9X AV scope on board. It will group Federal factory 140-grain loads in just a shade over an inch, and my 125-grain Nosler Partition handloads in well under an inch. Moreover, it will send both bullet weights into the same spot on the target.

Guns and ammo There is no shortage of rifles in 6.5×55. They’re made by Blaser, CZ (Czech Arms), Howa, Remington (which did a limited run a few years ago), Ruger, Sauer, Steyr, and Winchester. Federal, Remington, and Winchester all load 6.5×55 ammo.

Ironic, is it not, that one of our finest big-game cartridges should be a 109-year-old military round designed for an army that has not been in a war for nearly 200 years? Take a Swede hunting and you’ll write to me to say tack sa mycket, which means “thanks so much,” or you can simply remember me in your will.

On the off chance you’re not fluent in Swedish, dodlig means “deadly.”