The Need for Speed

Haste does make waste--but it can also fill your tag. 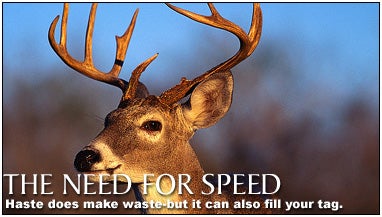 In Montana, in the early ‘8Os, I was hunting a ridgeline in deep, soft snow and jumped a nice whitetail buck out of his bed. He whirled and started to accelerate, and I had perhaps two seconds to get my rifle up, find him in the scope, figure out the lead, and pull the trigger. As it was, two seconds was enough, and he was the only deer I saw that trip.

In the best of all possible worlds, we would be able to watch a critter stroll into view, raise our rifles in a leisurely manner, and shoot with all the time we need. In this world, we are sometimes forced to shoot at an animal that is about to get or is getting the hell out of there-or we go home empty-handed. (And before we go any further, you should understand that I’m not presenting you with a rationale to blaze away at anything you please. Speed becomes a factor only after you’ve identified your target beyond the shadow of a doubt. If you’re not sure of it, keep your rifle down and watch through your binoculars until you are.)

Defeating Dither
Speed is achieved by the absence of dither-a brew concocted from indecision and clumsiness that saves thousands of animals’ lives every year. Much indecision comes from not knowing clearly what you want to shoot. Should I settle for a forkhorn? What if a better deer comes along after I shoot this one? While you are debating, the deer becomes aware of you and leaves. Decide what you want beforehand, and stick to your decision.

Can I make the shot? If you think you can’t make a shot, you are probably right. As you become experienced, you will develop a very good sense of which shots you can take and which you can’t. Until you reach that point, play it cautious.

Much hesitation is caused by unfamiliarity with your firearm. Omigod, where’s the safety on this thing? If you have a new rifle, or a different type of action from what you’re used to, or you only pick up your rifle once a year, you will dither-unless you practice.

**The Speed Drill **
I’m sluggish and torpid by nature, so by rights I should never have gotten that Montana whitetail. However, for 25 years I’ve practiced shooting quickly every chance I get.

The drill consists of two parts. At home, I practice shouldering a rifle that I’ve checked very carefully to make sure it’s unloaded, aiming at a lichen patch on an oak tree 50 yards away, and snapping the trigger, all in as close to one motion as I can make it. Do this regularly and you’ll get pretty fast and pretty smooth. Don’t do this if you live where the neighbors can see you. You’ll be visited by a SWAT team, and they’ll show you how fast they can shoot.

Then, at a 100-yard range, I put up a target with an 8-inch bull and load five rounds. I shoulder the rifle, aim, and allow myself three seconds to get off the shot. If I can’t get the crosshairs where I want them in that time, I lower the rifle and count it as a miss. (If you shoot at a public range, be sure and check beforehand to see if this kind of practice is permitted.)

Hits anywhere in the black count; anything outside the black is a miss. I go through 20 rounds, and if I can put at least 18 bullets through the black, I’m okay, provided that the other two are no farther out of the bull than the nine-ring.

Speed kills, as the old slogan goes-and it puts venison on the table.