Seven tips to help you make your shots this season. 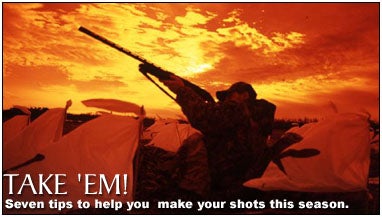 When waterfowl commit to your spread, it may seem like a small task to say, “Take ’em.” But plenty of easy chances are squandered each season through the lack of good planning and great timing. Here are seven tips for better shot-calling:

(1) Testing, TestingÂ¿Â¿Â¿ Before any shells are loaded, waterfowl hunters should take their positions, then mount and swing their shotguns a few times to get a feel for where their barrels will move in relation to companions, objects, and brush. This drill is as important in an open goose field as in a duck blind, and it makes everyone safer and more aware of their surroundings.

(2) Who’s the Boss Choose one person to call the shots, and trust his or her judgment. Among friends, take turns taking charge so that each hunter develops a feel for the right time to unleash the guns. Appointing a designated shot caller discourages the quick-draw artist in the group and assures that friends all get the same opportunities for clean, close shots.

(3) Know Your Limits Distances to incoming ducks and geese can be deceiving. A foggy morning typically makes waterfowl appear farther away than they are, and a bluebird day can make them seem closer. Squinting from under a cap can also lead you astray, as can a stiff wind. A good way to avoid shooting at out-of-range birds is to place the farthest decoys at 35 to 40 yards out, for an accurate marker by which to start the guns.

(4) Watch Your Back Instead of staring blankly into the same hole in the sky, hunting partners should choose specific, separate watch areas. Done correctly, two, three, or four sets of eyes can maintain a constant 360-degree watch for incoming birds. This way, you can carry on casual conversations with your buddies, knowing that somebody is watching your back.

(5) Left, Right, Left If you’re the shot caller and your hunting partners are hiding as they should be from watchful eyes overhead, yelling “take ’em” isn’t enough. You also have an obligation to declare the birds to be left or right, high or low, in front or behind, so that barrels are moving in the right direction as quickly as possible. Don’t use clock positions to express birds’ locations: The brain has trouble analyzing that information under pressure, and fast-flying waterfowl can spin through half the dial while the words are falling from your lips.

(6) Looking Up Call the shot if a flock within range passes directly over an open blind or pit. Any bird looking straight down will almost certainly see hunters peering up. Waiting for another pass can be a tactical blunder. Plus, the overhead position exposes vulnerable breasts and necks, making for clean hits and easy retrieves. (7) Early Warning Call the shot a second or two early on a low-flying flock of ducks that show no evidence of circling or lowering flaps to land. The advance warning gives crouched shooters time to rise and swing as fast-moving incomers flare at 20 to 30 yards. Waiting until the zipping flock is within easy range can create a riot of close-quarters confusion. The early call is especially helpful on low wads of teal and divers, such as scaup, which are notorious for buzzing spreads and sweeping past tardy shooters.