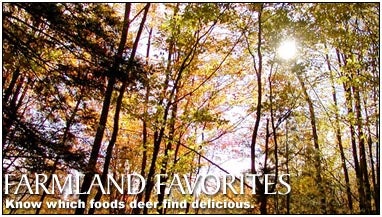 Find the food and you’ll find the deer. It sounds simple enough, but it’s not. Whitetail deer are adaptive creatures that dine on a mind-boggling variety of plants-and in rare but documented cases, on birds, insects, and fish. Even in farm country, where cultivated crops make up a whopping 40 to 80 percent of a deer’s diet, the menu seems endless.

But deer seek out the most nutritious foods. In other words, they have favorites, and the hunter who keeps track of these throughout the season is ahead of the game. The early season, in particular, is prime time to pin down and hunt favorite food sources, as deer gorge ahead of the rut. That said, choice foods still play a role during the breeding activities, and they take center stage again afterward. Here’s a rundown of favorite farmland foods all season long.

** Late Summer**
Just before and into the early archery and muzzleloader seasons, deer take advantage of tall green cover to feed on high-protein grains. Though corn is on the menu and important in many areas, its height can make it hard to hunt. If you have the option, focus instead on soybeans, oats, and grain sorghums such as milo and millet. While the weather is still hot, deer favor forbs and succulent broadleaf plants such as canola, rapeseed, and turnips. As crops begin to dry out, any new growth-weeds springing up on ground disturbed by the plow, by controlled burns, or by grazing cattle-holds great appeal.

Alfalfa, a summerlong deer staple, can be especially attractive when rains follow cutting. Seeps and other low-lying wet areas that support new greenery can also be hotspots. And don’t forget winter wheat; even before deer begin feeding on wheat sprouts, they seek the weeds that follow planting. Watch for does feeding heavily in these areas. By late August, a few dominant bucks will start checking them out. Set up nearby and let these big early-season bucks come to you.

**Fall **
If it’s a good year for mast, acorns trump everything. Be discriminating. Set up stands near milder chinquapin, burr, and white oaks in early October. Be prepared to move to pin, black, and red oaks when their bitter, pungent acorns drop. Down south, pecans are powerful attractants to deer, which may focus on them exclusively until supplies are exhausted. Abandoned orchards or wild fruit such as plums, blackberries, and persimmons draw intense short-term interest. Once the rut begins, bucks become less concerned with food, but does are still actively eating. Hunt the periphery of doe feeding areas and you’re sure to see bucks.

Winter
As the days shorten and temperatures drop, whitetails turn to waste grains in harvested farm fields. Concentrate your hunting on croplands close to woods or grassland cover; open fields may show heavy deer tracks, but most of the traffic is at night. With the onset of hard frosts, the menu narrows considerably, and deer will look for supplements to dried grains. New green vegetation such as winter wheat is at an absolute premium now. Find a patch of wild rye or other hardy grasses in the woods, where the forest canopy protects them from all but the hardest frosts, and you’ve found a deer magnet. Once the snow starts, unharvested grain can be a gold mine. Set up near rows of standing corn, for example, and fill that late-season tag.