The Best Guns of the Year

From turkeys to targets to waterfowl, these three are tops. 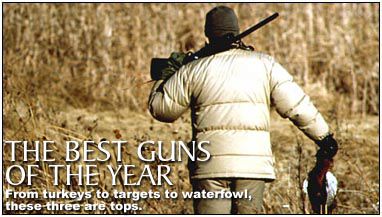 With the shooting industry poised to unveil mountains of new products at the SHOT Show in Orlando this month, here’s hoping 2003 turns out to be as good a year for new guns as 2002. Last year gave us the Beretta Xtrema, the Ithaca Storm Series Turkeyslayer, and the Browning Citori 525, as well as tantalizing glimpses of Ruger’s long-awaited Gold Label side-by-side and Remington’s retro over/under, the 332. The latter two guns, unfortunately, weren’t on dealers’ shelves at press time, but I was able to shoot the other three extensively last year and pronounce them all winners.

Ithaca Storm Series Turkeyslayer
Not only does Ithaca’s newest version of the Turkeyslayer flirt with turkey-gun perfection, but it costs significantly less than most Model 37s. Ithaca’s Jeff Walker tells me that the use of a synthetic stock and a fixed barrel on the Storm Series guns saves both material and fitting costs, enabling Ithaca to list the guns for $499. The old wood-stocked Turkeyslayer, by comparison, sells for $679.

The barrel is both fixed and free-floated, allowing you to mount optics on the drilled and tapped receiver without ever worrying about play between the barrel and the receiver wreaking havoc with your zero. The trigger is light and crisp, and the whole package weighs around 7 pounds, just right for a gun you’re going to carry all week and shoot once on Sunday.

The 24-inch barrel has a lengthened forcing cone to thicken your patterns and factory ports to keep the stock from slapping you in the face. There are TruGlo sights on the barrel and a LimbSaver recoil pad on the buttstock. The gun comes dipped in Realtree Hardwoods camo. I’d prefer a basic Amish-black finish with a Monte Carlo stock, but aside from those quibbles, this is the best turkey gun I’ve seen in a long time.

Browning Citori 525
Browning’s venerable Citori got a facelift for 2002, appearing in a new field and target version called the 525. The 525 has a steeply curved Etchen-style pistol grip paired with a Schnabel fore-end, giving the gun a much different feel from the Lightning-style Citoris when you pick it up. The Euro-checkering (Browning’s term, not mine) is cut in swooping panels that I could take or leave alone, but the stock has nice walnut and an attractive matte finish in place of the shiny urethane found on far too many guns.

What sets the 525 apart from other Citoris is its dynamics, not its cosmetics. If Citoris have a fault, it’s that the barrels are thick and heavy, making for a sometimes ponderous swing. Browning has shaved ounces out of the 525’s barrels, resulting in a much livelier gun. The Sporting Clays model I shot moved easily and surely to the targets, and I have no doubt it would do the same in the dove field.

The Sporting Clays model features ports, HiViz sights, interchangeable trigger shoes, and competition choke tubes. If you live without the competition bells and whistles, you can spend $700 less and buy the Field model, which listed for $1,777 last year. It should make a great crossover piece for folks who want to shoot the same gun for birds and targets.

Beretta A391 Xtrema
Soft-shooting, heavy-duty, reliable, and brain-dead-easy to clean, Beretta’s Xtrema represents quite possibly the final word in 31/2-inch autos. Externally, the Xtrema looks like a bulkier 391 Urika. Inside, it’s an entirely different design, combining a rotary bolt (¿¿ la Benelli) with a simple, foolproof gas system. When you take the Xtrema apart, it breaks down into just three pieces, counting the barrel. The action arms, bolt, and return spring are all one assembly; pull out the operating rod and the whole works comes out in one easy-to-maintain piece. Take the metal ring out of the gas cylinder, scrub it, clean the inside of the cylinder, wipe off the magazine tube, and that’s all it takes to keep this remarkably uncomplicated shotggun running smoothly.

Because the Xtrema’s return spring runs around the magazine tube, there’s room in the stock for a spring-loaded recoil reducer. The reducer teams with Beretta’s absorbent Gel-Tek recoil pad and an overbored barrel to cut the kick of the heaviest 31/2-inch loads. I shot an Xtrema at skeet and sporting clays all summer and found that it handled very well, and cycled 11/8-ounce and 1-ounce high-velocity target loads effortlessly.

Does it have any flaws? A couple. The triggers on the early guns were dauntingly heavy-mine breaks at a creepy 8 pounds-but Beretta says the newer guns have better triggers, and they’ll rework too-heavy triggers at the factory. More egregious, the cross-bolt safety isn’t reversible for us left-handers; and the sling swivels aren’t quick-detachable, so you shoot this gun with the sling on or you go without a carrying strap.

Like the Urika, the Xtrema features extra spacers that allow you to alter the drop and cast of the stock. It comes only in synthetic-stock models (black or camo) with inlaid rubber gripping surfaces in place of checkering. No, the stippled rubber inserts aren’t pretty, but they do help you hang on to this gun, which is good, because the Xtrema is definitely a keeper.