How to Get Ahead

There's more than one way to swing a shotgun. 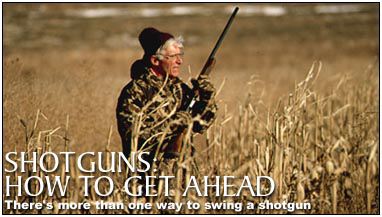 If you ever watch a trap meet, you’ll see there are two types of competitors on the line. The first are the hotshots who break birds almost the instant the house is cleared. They swing a shotgun very quickly, and the “shoot” message instantly travels from brain to trigger finger. The second type is deliberate and calculating. They take a good long look at the clay, track it for a while, and then break it.

Fast shooters claim that they use no lead at all, that they shoot right at the bird. Slow shooters describe the length of their leads in feet.

Although these different techniques work well in trapshooting, they don’t always translate to success in the field. No-lead shooters tend to shoot fast at everything, which isn’t effective on long crossing shots. Deliberate shooters tend to be so at all times, which is a disadvantage when hunting birds in thick cover. The most successful shooters can approach a bird or a target either way-shooting with almost no lead or with a fairly long, sustained lead. It’s a question of knowing when to use which approach, and then practicing them both.

Swing-Through Shooting
Inside 30 yards, the easiest method of hitting birds is to shoot right “at” them. Swing through the bird, tracing the barrel along its line of flight. Think butt, belly, beak, bang as they say in England, or imagine coming from behind and “painting” the bird out of the sky. Pull the trigger as the muzzle passes its head.

Because your gun is moving faster than the target that it overtakes, you won’t be aware of leading at all. Yet by the time the shot actually leaves the barrel, the muzzle is ahead of the target. Swinging through a bird and shooting right at it works extremely well in the uplands, where birds flush at close range and take you by surprise. All you have to do in the heat of the moment is react and point at the beak.

As ranges increase to 35 and 40 yards, you have to swing faster and faster in order to shoot at the heads of crossing birds and still hit them. It can be done if you’re quick and your timing is flawless. At one clinic I attended, the instructor walked us back five steps at a time, building up our gun speed until we were breaking 50-yard crossers by shooting at the front edge of the targets. But there’s an easier way.

Shooting the Imaginary Cigarette
On long crossers, start the muzzle ahead of the target. Look at the bird long enough to judge its speed and angle, then flick your eyes ahead to an invisible, moving spot in front of it before you ever move the gun. If it helps, imagine the bird is smoking a very long cigarette and you’re going to shoot the ashes off the tip. Look at the end of the cigarette and swing the muzzle along the flight path as you raise the stock. When the gun comes to your shoulder, the muzzle will be pointing at the ashes. Pull the trigger and follow through. Don’t measure a precise lead. Just keep the gun moving and trust the spread of your pattern to give you a generous margin for error.

This sustained-lead method has the advantage of seeming to slow the target down. When you’re frantically trying to swing through them, crossers look like tiny, screaming orange aspirin tablets or rocket-assisted hummingbirds. Those same targets, traveling at the same speeds, look big, fat, and easy to hit if you never let them get ahead of the barrel. When your buddies ask you how far you led the target, you honestly won’t know, exactly, but you’ll have an X on the scorecard or a bird in the bag to prove the gun was pointed in the right place.