Save on Ammo, Shoot in Bulk

Don’t let the high price of hunting ammo keep you off the practice range. Use cheap military rounds to stay sharp. 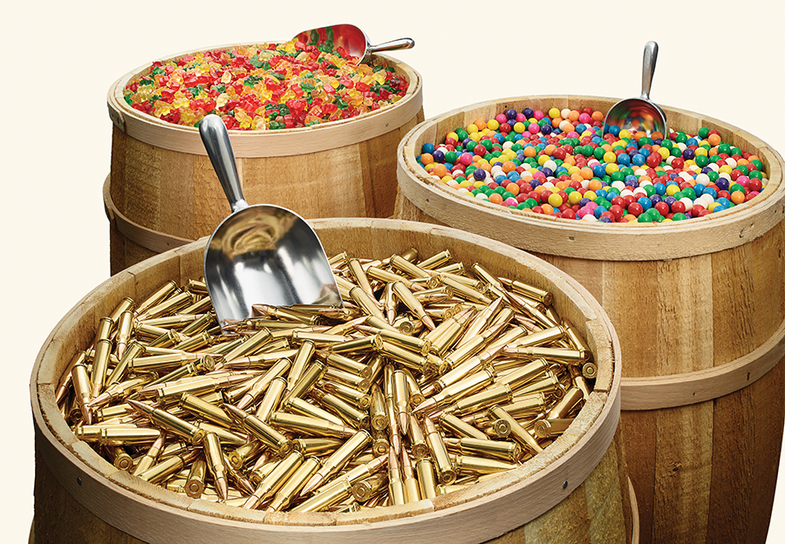 After many decades of practicing their dark art in obscurity, snipers are not only trendy but glamorous. But I don’t think any of the gee-whiz reporting on them has given an accurate idea of the inhuman amount of range time it takes to earn the designation Scout/Sniper. A Marine, for example, must be qualified as Expert with the M16A2 rifle just to get into Sniper School. Then he goes through a 12 1⁄2-week program where he’ll get four hours of shooting a day and burn a total of more than 1,500 rounds. That’s several lifetimes’ worth of ammunition for the average hunter. My point: Good rifle shots shoot a lot. The government picks up the Marine’s ammo bill. You and I are not so fortunate.

Most rifle ammunition, especially quality hunting ammo, has become so expensive that many simply cannot afford to go burning up boxes of the stuff at the range. So what are we to do?
The answer is to run out and buy another gun—specifically, one chambered for .308 or .223 (assuming you don’t already have one of these). It may be your latest hunting rifle or just a practice gun. Either way, and almost no matter what you pay for it, it will save you oodles in the long run and allow you to keep right on shooting.

That’s because there are tons—­literally—​of cheap military or military-type ammo made in 7.62mm (.308) and 5.56mm (.223). All you need is a gun to shoot it through. And it just so happens that there are more well-­broken-in rifles chambered for those rounds than the locusts that Moses called down on Egypt.

You don’t need something expensive. It must have a decent trigger, and go bang when you pull that trigger, and shoot fairly well, but that’s about it. There are, in fact, about half a dozen new rifles that can do that for under $500, and a couple closer to $300. As for a scope, there are plenty of excellent used ones around.

My own practice gun is a Ruger Gunsite Scout, and many’s the time that I take it to the range with cheap ammo and shoot the hell out of it. Not only is it great practice, but it’s great fun. Remember fun?

You can buy cheap 7.62mm and 5.56mm ball ammo in bulk containers of 100 to 200 rounds or more. This is where the real bargains lie. But don’t rush out and get one. First, try a 20-round box of one brand at a time to see what shoots well in your rifle. Accuracy requirements are not stringent; anything that puts five shots inside 3 inches at 100 yards is just fine if you’re practicing for big game, for which the target’s bull should be about 8 inches and the ranges 25 to 200 yards. That said, all the brands I tested performed better than needed, and two tested far better—should you want to make your practice more interesting.

I did my ammo shopping at the local Cabela’s and at the Kittery Trading Post, which is an extremely serious gun store down the road, and came up with five 20-round boxes of 7.62 (.308) whose average price was only $17. At the range, my average 100-yard group for all five brands combined went just a hair over 2 inches, and the best single-brand average group size was 1.254 (see sidebar). This, on a February day so cold I saw dogs frozen to fire hydrants.

When you take into consideration how valuable big-game hunting opportunities are these days, spending some money on a practice rifle and ammo that lets you shoot it affordably is a smart investment.

On a bitter winter day, I tested five types of bulk ammo. For each, I shot three groups at 100 yards and then took the average. Here are the results.

The brand you don’t see here is Wolf, because I could not find it. It’s very cheap and works fine, though it tends to foul heavily.

**Warning: **
Before you buy anything, check with your range for its rules on military ammo. Don’t plink with this stuff; it ­ricochets.