No Guarantees: Why Rifles That Promise Half-MOA Groups Are Good Only On Paper

Rifles that promise half-MOA groups or better are wonderful on paper. But don’t expect them to help you in the field. 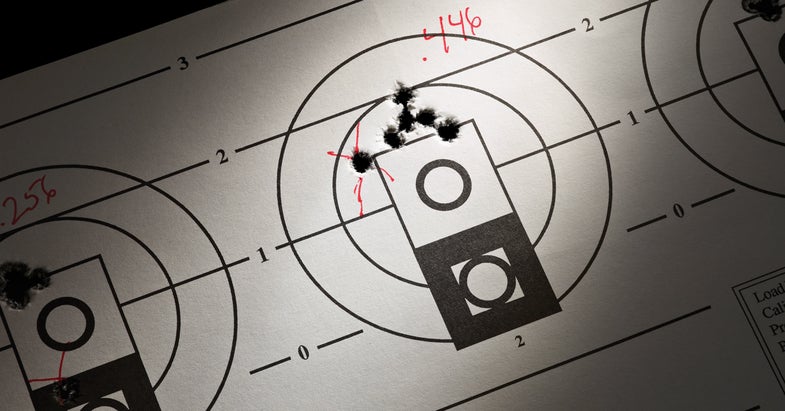 Back in the early 1960s when I got seriously interested in automobiles, the fastest street-legal cars would go from zero to 60 mph in 5.5 seconds, and had top speeds of 160 mph. This was blind­ingly quick, as the zero to 60 for most sports cars was around 10 seconds. In 2015, the fastest street-legal cars need only around 2.5 seconds to reach 60 mph, and can top 250 mph or more. This means they’re roughly twice as fast as what you could buy 55 years ago, and are far beyond the limit of what the average human being can make any practical use of.

And now we may be very close to this in rifle accuracy. Bullet velocity has not changed much in the last 50 years. But accuracy? That’s a whole new world. Back in the 1960s, when the AC Cobra and the Corvette Sting Ray were king, about the smallest group you saw from a big-game rifle was 11⁄2 inches. I don’t mean factory rifles; I mean custom guns, the best work available, with the best ammunition, fired by the most accomplished marksmen.

Varmint rifles did better. You could, if you were good, shoot spreads that went under an inch, and if you had a real jewel of a rifle, you might see 1⁄2 inch. But smaller than that it did not get, except in the wonderful and rare­fied world of benchrest shooters.

Today we are at the point where every time I go to the range with almost any kind of rifle, at any kind of price, I see minute-of-angle groups, and very often spreads that are much smaller than that. The change is so radical that I feel guilty about reporting it, and I know how honest I am.

The latest development in this trend is the veritable slew of gunmakers now guaranteeing that their rifles will shoot into 1⁄2 inch or even 1⁄4 inch at 100 yards—and they will send you the target to prove it. No less than a dozen makers now offer such a promise, and I have shot enough of these guns to tell you that they are capable of accuracy that was not thought even remotely possible 20 years ago.

I love extreme accuracy in hunting rifles. I’ve devoted immense amounts of money and effort over the years to obtaining it, and sometimes in failing to obtain it. There is massive satisfaction in knowing that your rifle is far, far more accurate than it must be for any conceivable job. Arnold Schwarzenegger once pointed out that the people who drive fast are the ones with BMWs and Subaru WRXs, while those who own Ferraris and Lambor­ghinis and Corvette Z06s just tool around at 55 because if they put their foot down—forget it.

Likewise, we have reached the point where some rifles are so accurate that few people are skilled enough to take advantage of what they have to offer. The truth is that it’s very tough to shoot a 1⁄2-inch group. By that I mean three shots from a big-game rifle (if you’re talking varmint or tactical or target rifles, it’s five, because in use, they’re fired in strings).

To accurately measure a group, you open the jaws of a caliper so they’re touching the outer edges of the two outer bullet holes. Then you subtract the bullet diameter from the reading. If the group you shot with your .270 measures 1.226 edge to edge, you subtract .277 (the actual diameter of the bullets) and get .949, which, although a fine, tasteful group, is not even close to half MOA. So now you’re really pissed off and you hold extra carefully and your group measures .848. The result is .571. Tough.

And that’s a half minute. To enter the realm of the quarter-minute group, you probably have to be a benchrest shooter, or F-Class target shooter, or varmint hunter. If you gave me a ­quarter-​­minute rifle right now and my life depended on producing a group of that size, I don’t know if I would be alive tomorrow, and I do this stuff all the time. The guys who shoot the groups that come with your guaranteed rifle fire for ultra-­accuracy day in and day out. And you don’t.

If you want to blame one person for this trend, that guy is probably Kenny Jarrett of Jackson, S.C. Kenny started as a bench­rester, began building rifles for sale, then decreed that every rifle that had his name on it would shoot MOA, and usually half of that. At the time no one expected or demanded that their .300 magnums put three shots into such a tight clump. Now we can.

Yes, But Does It Help?

For the average hunter, who is justly intimidated by anything over 300 yards, the answer is no. This gent’s problems are: shooting skill, lack of; nerves, excess of; and practice, near total absence of. How is a half-MOA guarantee going to save him?

The people whom it may help are those who have an unholy fascination with shooting game at long range, as opposed to hunting game. And they should probably not be encouraged.

Even if the average nimrod could shoot 1⁄2-​inch groups, which is doubtful, it would only be at the range over a nice, steady sandbag on a nice, steady bench. Neither of which is present in the field. What you may have is a nice rock, or a log, or a pack on which to rest your rifle, and a nice yucca spine in your knee.

Your rangefinder will give you the distance (and I assume you won’t screw up the math to get your elevation and “comeups”), but your anemometer will not be able to tell you what the wind is doing at 200, 300, 400, 500, 600, or 700 yards. And the wind can do wondrous things to bullets at long range.

Your heart, which was puttering along nicely at the range when nothing was at stake, will be invaded by a maniac on a trampoline.

Are you getting the picture?

I enjoy small groups as much as the next person, and will spend any amount of money to get them, but I don’t confuse half- or quarter-minute groups with anything that’s useful for most hunting, such as the ability to see game, or move quietly, or pay attention for long periods of time, or not wet oneself in times of stress.

Now that stuff is genuinely useful. And you can’t buy it.