The Anglers’ Guide to Sun Protection

Learn the best way to protect yourself from the sun's rays on the water. It could save your life. 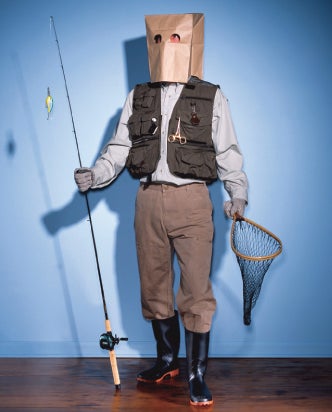 In 1992, Chuck Naiser of Rockport, Texas, decided to stop selling insurance and try to make his living as a flyfishing guide in the coastal bays near Corpus Christi. His wife gave him her blessing, provided that he’d make her two promises: (1) to religiously cover his skin with sun-protective clothing and slather sunscreen on when he went out on the water; and (2) to visit a dermatologist every six months.

Before making the switch to full-time guiding, the now 59-year-old Naiser had spent nearly every weekend of his adult life fishing beneath the broiling Gulf sun. Even this had taken a toll–prematurely “photoaging” his skin, triggering a couple of small precancerous lesions on his face and ears, and periodically causing his lips to crack and bleed for weeks.

Since he started guiding 13 years ago, Naiser has spent from 225 to 240 days a year out piloting his skiff and wading the shallows in pursuit of redfish. Despite all this time in the broiler, he says his ears and other parts remain fully intact and cancer-free, due in large part to his wife’s advice. He’s also grateful to his dermatologist, who, over the course of two dozen visits, has frozen off numerous precancerous growths on his neck, scalp, and ears, eliminating future problems.

Thanks to their efforts, Naiser says that he’s confident he’ll be able to keep catching redfish “until they find me lying facedown out there.” The key to any angler’s longevity, he’s become convinced, is sun-smart behavior.

“If I were to drop my guard for even two or three days,” he says, “it would shorten my career. Caring for your skin is as important in fishing as having a boat that runs. Just as your boat needs preventive maintenance, so does your skin.”

The Dark Side of a Sunny Day Sun damage is done by ultraviolet radiation, which bombards the Earth’s atmosphere in three basic forms: UVC, UVB, and UVA. The first packs the greatest wallop but is mostly blocked by the ozone layer. UVB is only partially blocked by ozone and is primarily responsible for sunburn and skin cancer formation. And UVA can pass through clouds and even glass; it hurts us by augmenting the burns that UVB triggers, and by photoaging the skin.

For fishermen of vari­ous stripes, excessive sun exposure is an occupational hazard. ­Southern-latitude anglers like Naiser are exposed to significantly more UVA and UVB than those in more northerly regions because solar radiation increases dramatically the closer you are to the equator. Not that those pursuing trout in the Canadian Rockies are significantly safer than their colleagues casting for bonefish in the Keys. “Every thousand feet you go up in altitude, there’s about 4 to 8 percent more UVB because there’s less atmosphere to filter it out,” explains San Diego dermatologist Lee ­Kaplan, M.D., author of the chapter on photomedicine in the definitive text, Wilderness Medicine (C.V. Mosby; 4th edition). “Guys who flyfish at high elevation–the mountains of Montana or Colorado, for example–do face a much greater risk of forming skin ­cancers.”

Another critical factor is that the sun’s rays bounce off the water, acting like a foil tanning reflector from yesteryear. “Fishermen can get burned in places you never think about,” says Kaplan. Behind the knees and under the chin are especially common. One guy suffered a painfully burned scrotum from light reflecting up his shorts.

Ignominious as this latter fate may sound, it could be much worse. The three most common forms of skin cancer have climbed in recent years:

• Basal cell carcinoma affects a million Americans each year. It’s rarely fatal, but if left untreated, it can ulcerate the skin and invade cartilage and bone, causing disfigurement.

• Squamous cell cancer targets another 300,000 Americans annually. These cells can travel to other parts of the body, including lymph nodes, lungs, and the brain, but fatalities are uncommon.

• Melanoma is by far the deadliest form of skin cancer–and one of the deadliest forms of cancer, period. Each year, some 7,500 patients die from it. Even more disturbing is the rate at which the risk is escalating, particularly for aging men. “Deaths from melanoma are rising most rapidly of all in men over 65,” says John Kirkwood, M.D., a world-famous melanoma researcher at the University of Pittsburgh Medical Center. Melanoma, if caught early, has a cure rate of up to 87 percent. But once a tumor gets established and has moved into surrounding lymph nodes, it will kill up to 90 percent of its victims.

An important factor to be aware of is early sun exposure. A single bad sunburn in childhood significantly ups your odds of melanoma decades later. “For many adults,” says Kirkwood, “the die might already have been cast. The real challenge is to protect our children. It looks like we get our greatest sun exposure by far in the years of childhood and ­adolescence.”

Getting the Message Despite the impact of early exposure, older fishermen still have plenty of opportunities to protect themselves. One form of melanoma, called lentigo maligna melanoma, only seems to result in people who, says Kirkwood, get “gobs and gobs of sun exposure,” like tropical fishermen. A case in point is the retired businessman who came to see Kirkwood after a fishing trip to the Caribbean.

“He’d had multiple sunburns,” says Kirkwood, “and he’d developed a patch of freckle-like skin near his eye orbit the size of a quarter. A biopsy confirmed it was this form of melanoma, and fortunately we caught it early.” A plastic surgeon excised the affected tissue.

Kirkwood says his patient’s brush with a potentially lethal disease hasn’t stopped his love of angling. “People who are fishermen once are fishermen always. He has altered his behavior dramatically. He always wears a hat and other protective clothing. He is assiduous about applying sunscreen. He’s become a very good advertisement for sun-smart behavior.”

Professionals like Naiser see that the gospel of sun safety is spreading among fishermen. “The people I take on fishing trips have a common conversation about all this,” he explains. “They’ll say, ‘Remember how we used to try to tan. Now we do everything possible not to.’ Fishermen are getting wise to the message.”

Along these lines, Naiser has come up with a motto he repeats to anyone interested in protecting his or her vulnerable human hide.

“Wrap that rascal!” he advises. “Cover it, coat it, gel it down!”
**
Sun Smarts:** A Three-Part Strategy Researchers have begun to reduce skin cancer death rates through new treatments. Still, prevention is by far the better option. Experts recommend a three-part hierarchy of behaviors:

First Priority: Avoidance “Your best bet by far is to stay out of the sun,” says Kaplan, “especially during the hours from 10 a.m. to 3 p.m. when sunlight is most intense.” If you do venture forth during this prime frying time, try to stay in the shade as much as possible.

Second Priority: Barriers ­Protective clothing is the second most effective measure. Start with a wide-brimmed hat that shades your entire face and neck. Even better in very intense sun conditions are products like the Simms SunClava, a balaclava with a sun protection factor of 50+. For the rest of your body, realize that typical summer clothing isn’t as protective as you might imagine. A normal white cotton T-shirt, for instance, has an SPF of only about 5–and this declines significantly the moment the garment gets wet. Companies like Solumbra, Coolibar, and SunGrubbies use different technologies to give their activewear clothing lines a much higher SPF–from 30 to 50. Another option is a product called Rit Sun Guard, a laundry additive you throw in with your wash to gain an SPF of nearly 30.

Last Priority: Sunscreen Choose a product with a minimum SPF of 15, though SPF alone is not a perfect measure of a sunscreen’s effectiveness, since it only measures UVB-blocking potential. Select a “broad spectrum” formula that also stops UVA. Highly water-­resistant preparations like BullFrog Sunblock and Aloe Gator are two good choices.

As effective as such products are, they only work if you put them on correctly. Coat any exposed skin, including under your chin, and don’t be stingy. The FDA specifies an application of 2 mg per square centimeter to obtain a given SPF rating. For the average adult, this means 11/4 ounces for full-body coverage. Surveys show that most of us use half this much at best. It’s also critical to put the sunscreen on before you go outside. And even the most highly water-resistant products must be reapplied every couple of hours.