A Close Call With Rabies

Learn proper procedure for dealing with rabid animals that could save you or your bird dog's life. 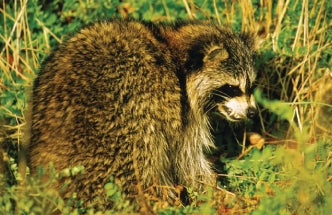 At 9:30 on a sunny July morning, the screaming starts: a ragged, half-human keen that pierces the halcyon woods flanking our western Pennsylvania home. My wife, Debbie, our 11-year-old son, Jack, and I run outside to see what’s being murdered. There, beside a patch of Big Boy tomatoes, stand our two pugs, Lefty and Biscuit, with something scruffy and feral wedged between them. It takes a moment to realize what exactly is happening. A 20-pound raccoon has affixed its teeth to the jowly flesh of Biscuit’s muzzle and won’t let go.

I grab a shovel and pin the raccoon’s torso to the ground, which only intensifies the creature’s screams. Putting my full weight into it, I try to shovel the attacking beast in half. Debbie grabs Biscuit’s trunk and tries to yank her free, but the raccoon’s teeth refuse to unclamp. Debbie yells for our friend Rudy Plese, who’s inside working on a carpentry job. He runs out and grabs another shovel.

“Hit it on the head,” shouts Debbie, whose own hands are now perilously close to the raccoon’s teeth. Rudy raps the beast’s brainpan once, then again, and again.

“Whack it harder,” I say, trying my best to snap its spine with my own shovel. A half dozen hits later, the raccoon finally surrenders its death grip on Biscuit, who skedaddles loose, her normally curly tail straightened from trauma. Now that Rudy finally has a clean shot, he gives the raccoon two more blows to the head. Finally, its eyes bulge, blood spurts from its nostrils, and the demon dies.

Jack, Debbie, and I all cradle Biscuit, trying to calm her. She’s soaking wet, and the three of us have been thoroughly slimed. A call to the Allegheny County Health Department confirms our worst fears: The source of this moisture is almost certainly raccoon saliva. Debbie takes Biscuit to the vet for a rabies booster shot. Jack and I pack the raccoon in a garbage bag, surround its head with a bag of ice cubes to preserve the brain tissue, and drive it into Pittsburgh for testing.

Later that same afternoon, we receive a call from the lab. The raccoon has, in fact, tested positive for rabies. All four of us will need to go to the emergency room for evaluation.

Horrible and Fatal Rabies comes from a Latin word meaning “to rage”–an apropos description of the thrashing, hyperventilating death throes of victims of so-called “furious” rabies. There’s also “dumb” rabies, a less sensational death to watch, though no doubt equally unpleasant to suffer, which is characterized by apathy, depression, paralysis, and coma. Either way, after the symptoms arise, rabies is incurable and virtually 100 percent fatal.

The disease is caused by a nasty, bullet-shaped virus in the Rhabdoviridae family. Once inside the bloodstream, the virus invades and eventually overwhelms the brain and central nervous system. These microscopic miscreants are capable of infecting all warm-blooded hosts, including humans, though their most common victims in the United States today are wild animals, particu­larly raccoons, skunks, foxes, bats, feral cats, and coyotes.

Each year, 7,000 to 9,000 such critters test positive for rabies, though this surely represents only the iceberg’s tip. Nationally, almost half the positives come from infected raccoons. In the Mid-Atlantic states, which are currently in the throes of an unprecedented raccoon rabies epidemic, the rate is closer to 90 percent.

Rabies spreads from one animal to another through infected saliva, which accumulates in great foaming gobs once the virus paralyzes a victim’s throat muscles. Bites from infected raccoons have led to an increasingly bizarre array of affected animals. Just this summer, a black bear in Centre County, Pennsylvania, tested positive. In Georgia, rabid beavers have attempted to jump into fishermen’s boats, and rabid whitetail bucks have been spotted harassing horses and even chasing hunting dogs.

Spreading Like the Plague
The contemporary epidemic in raccoons dates back to the 1970s. In an effort to replenish depleted stocks in the Mid-Atlantic region, more than 3,500 raccoons were live-trapped in Florida and transplanted to West Virginia. Unfortunately, some of these animals carried presymptomatic rabies and ended up starting a chain reaction that wildlife health officials are still contending with today.

“The raccoon strain of rabies is known to travel approximately 10 times faster than any other type,” says Jason Suckow, director of wildlife services in Pennsylvania for the USDA’s Animal and Plant Health Inspection Service. “It’s really unfortunate that those animals were transplanted, because once they arrived, raccoon rabies was able to spread in all directions along the Appalachian mountains.”

If federal, state, and local authorities had unlimited resources, they could blanket the entire Mid-Atlantic region with baits containing oral rabies vaccine, bringing the epidemic to a halt in a matter of years. But because of budgetary concerns–each bait costs $1.23–the current plan is necessarily more modest: establish a baiting corridor beginning at Lake Erie and running south along the Pennsylvania-Ohio border, through West Virginia and Tennessee, and down into Ala­bama. Once the spread of ­raccoon-strain rabies has been halted on the western side of this barrier, the idea is to gradually roll the curtain eastward toward the Atlantic Ocean.

When we arrive at the ER late on the afternoon of our own exposure, we get some good news and some bad news. Thanks in large part to the aggressive vaccination of domesticated animals, human deaths from rabies have dropped precipitously since the 1940s when such measures first became mandatory.

The fact that none of us were bitten this morning is further cause for guarded reassurance. On the other hand, skin exposure to the saliva has been known to cause infections through cuts and tiny abrasions. When I mention that Jack and I both have colds and that we might have rubbed our eyes after petting Biscuit, the doctor says this is another possible means of transmission.

Given our circumstances, he says, the choice to undergo a preventive series of shots remains up to us. But if he were in our shoes, he wouldn’t hesitate to get the shots.

We agree, especially after he explains that the agonizing stomach shots most people still fear haven’t been used for 30 years. To our great relief, today’s treatment is infinitely less draconian. On the first day we will begin with intramuscular injections of immune globulin, a thick concoction of antibodies that jump-starts an immune response to any potential rabies virus in our blood. Rudy and I each get four of these shots deep in the muscles of our thighs and butts. Debbie and Jack, who weigh less, get three and two shots respectively. The injections are a little painful but not unbearable. Then we each receive an additional single shot of live rabies vaccine in the shoulder. This contains a genetically altered virus designed to trigger our immune systems to begin producing our own natural antibodies to the disease.

Over the next 28 days, the doctor says, we’ll need to come back four more times on a precise schedule to receive additional doses of vaccine. It’s reassuring to learn that no human who’s adhered to such post-exposure treatment has ever come down with rabies. The main downside is some temporary muscle tenderness in the injection sites and the arguably more painful financial burden of the shot series, which comes to an estimated $1,500 per individual.

Back home that night, I’m thankful for the latest medical advances but conclude that, all in all, it would have been better to have avoided this morning’s encounter altogether. >