A Bear of a Problem

As human-bear conflicts increase, is more hunting the answer? 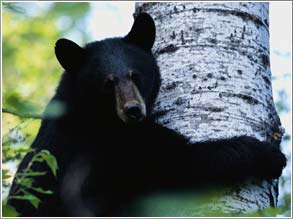 After the first break-in two years ago, the woman (who has asked to remain anonymous) took action. She fastened metal bars over the first-story windows of her Jefferson Township, New Jersey, home, then rigged electric wire around her back porch. She stayed inside evenings, afraid to even take out the trash.

Protecting herself from criminals? No. Her precautions were aimed at black bears, and they didn’t work. Earlier this year she experienced break-in number two. Like the previous incident, the culprit was a hungry bear in search of food.

“I feel like I’m living in a prison,” she told Kelcey Burguess, a bear biologist with the wildlife control unit of the New Jersey Division of Fish, Game, and Wildlife.

Over the last decade New Jersey’s black bear problems have skyrocketed (see sidebar). Burguess believes 1999 will be the first 1,000-complaint-call year. Calls range from the relatively annoying-bears feeding in dumpsters, knocking over bird feeders, etc.-to the outright distressing-bears killing livestock and a bold few breaking into homes for food.

New Jersey deer hunters have their own unique bear problem, and it starts right after they’ve pulled the trigger or let an arrow fly. “Deer hunters can have some trouble retrieving their deer,” Burguess says. “They climb down from their stands, and a black bear’s feeding on or dragging off their (downed) deer before they can get there.”

People bumping into bears isn’t unheard of, either, especially during an evening stroll. Coming face-to-face with a 300-pound bear will scare anyone. “Luckily, we haven’t had a mauling,” says Burguess. “But it’s something we’re expecting. It’s very possible, unfortunately.”

Bountiful Bears
Dr. Lynn Rogers of the North American Bear Center in Ely, Minnesota, estimates total black bear populations in North America at 700,000. Quite a success story considering 1993 estimates put blacks in the 400,000 to 450,000 range. One reason for this comeback is very conservative bear management practices. Bear habitat has also increased over the last 20 years, Rogers notes, from thousands of farms failing and becoming reforested.

Not surprisingly, more bears and more people moving into bear habitat creates more conflicts. New Jersey’s difficulties aren’t unique. California, Pennsylvania, and Florida are also setting records for bear-vehicle accidents and complaints. More hunting seems an obvious solution. Politics, however, can get in the way. But even with hunting, people need education about bears and how to live with them.

Citing a near-expiration of bears, the New Jersey legislature closed its hunt in 1971. Bears eventually drifted back in from neighboring Pennsylvania and New York, and found plenty of food provided by both nature and people (deer feeders and open trash cans top the people list). Today, in the northern quarter of the state, “we have a bear population that’s exploding,” says Burguess. New Jersey’s estimated 550 bears may not seem like many, but they’re in the state with the nation’s highest density of people.

So, reestablish a hunt to trim back the population, right? Not so fast. Explains Sue Predl, a senior wildlife biologist with the state, “There are certainly enough bears to support a hunting season. But there isn’t the social and political support for a hunt right now.” Support is especially absent in the southern three-quarters of the state where bears have yet to expand. Key word, “yet.”

Politics versus Conservation
Florida’s bear hunt was limited to the northwestern counties of Baker and Columbia, plus the Apalachicola National Forest. Elsewhere bear numbers were low enough to list the bruin as “threatened.” According to Thomas Eason, leader of the bear management section for the state’s Game and Fresh Water Fish Commission (GFWFC), holding a hunt while bears were also listed as “threatened” consed some people (though bears were hunted only where populations were sustainable). Antihunters made much of this seeming disparity, and GFWFC, bowing to perceived public pressure, canned the hunt in 1993.

Today, Florida is experiencing intense bear problems. Before 1995, Eason’s section tallied under 100 bear complaints a year. In 1996 complaints increased to 155, then jumped to 309 in 1997. Last year, two records were set: 435 complaint calls and 90 bears killed in vehicle collisions.

Population-wise, bears are doing well, though there’s some dispute as to how well. In 1992, GFWFC estimated 1,500 bears statewide, with the overall population in decline. Currently, Eason says there are between 1,800 and 2,000 bears. So, by GFWFC’s calculations, during a time with no hunting and despite 210 bears road-killed in the last three years, bear populations have added between 300 to 500 animals.

But those figures may be too low. In December 1998, the U.S. Fish and Wildlife Service (USFWS) removed Florida’s bears from threatened or endangered consideration, finding two to three times more black bears than previously thought. Bears in what the USFWS considers “secure habitat” (large blocks of federally protected lands) totaled 2,200 animals, with a possible 800 additional bears scattered throughout the state. If the USFWS is correct, that means there are twice as many Florida bears compared to just seven years ago.

Raymond Hamlin, Jr., president of Florida Bear Hunters Association, thinks the latter is the case. He says increasing bear complaints show that “the habitat’s overpopulated and the bears are coming out.” The last four years, Hamlin’s group has called for a hunt on male bears 200 pounds and up. Remove a number of these dominant males, he argues, and more habitat is opened, with fewer juveniles pushed into areas with high human populations.

Eason says a hunt wouldn’t solve all the problems. “However, I do think you’d end up harvesting those bears that are not afraid of people and are pushing into human areas.”

Two sticking points, though. First, Florida’s “threatened” listing for bears. Is it warranted, given population increases? The USFWS doesn’t think so. Second, as Eason notes, antihunters played a large role in ending the hunt. “I don’t think there’s any fewer of these people today,” he says.

There’s conservation and there’s politics, and often the two don’t meet.
Fast Food
Oft quoted advice: “Don’t feed the bears.” But what if the bears are helping themselves?

As the Wall Street Journal reported earlier this year, black bears in California’s Yosemite National Park are breaking into cars, looking for quick and easy meals. Lots of cars. In 1998, 1,100 vehicles were damaged to the tune of $634,000. Favored methods of entry include ripping off vehicle doors and smashing out windows.

California as a whole is experiencing significant problems with nuisance bears. According to Doug Updike, bear biologist with the California Department of Fish and Game (CDFG), the state is home to between 18,000 and 23,000 bears, nearly double compared to the early 1980s. When there were half as many bears, the CDFG issued 50 to 80 depredation permits annually for the really troublesome bruins. Within a decade that surged to 150 permits, and last year a record 327 were issued. This is despite hunters taking 1,600 bears last hunting season.

Interestingly, Yosemite’s bear problems aren’t occurring immediately outside the park. Of course bears could simply be staying within park borders. But Updike thinks hunting may be a factor. Though it’s verboten inside Yosemite, hunting occurs in the national forests surrounding the park. “Many of the black bears that become a little too bold and active may move out, and are probably being taken during the hunting season,” Updike suspects.