The experts take their next test in part 2 of "The Science of Shooting Deer." 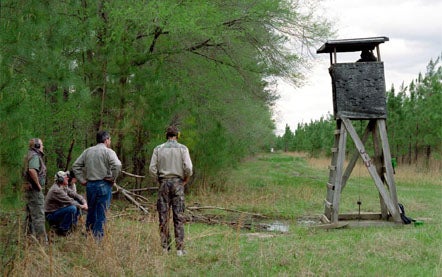 Nowadays, the whole world seems to be climbing into tree stands and tower stands (I don’t like them myself) because they give you a good look at what’s going on and keep your scent above the deer-for the most part. If you know how to use one, an elevated stand can be extremely effective as a shooting platform, but if you don’t, you’ll wish you were back on the ground.

A tower stand with a roof and four walls that totally enclose the shooter served as our elevated position. This type of stand first became popular in Texas but is now commonly seen in many Eastern and Midwestern states. Each wall has a shooting port that extends the full width of its top. There were two deer targets in front of the stand at 300 and 400 yards. Another, placed at 200 yards to the left, had its vital area partially obscured by light brush. The fourth was positioned 100 yards to the right, also behind a light screen of brush.

Shooting from a tower is basically the same as any other kind of rifle shooting-the long-range targets are tough and the close-range targets are easy, provided you know how to get a steady rest and you have the right equipment. Several decades of deer hunting have taught me that 6X is the minimum amount of magnification that should be used for long-range shooting, and 9X is even better.

Any time I anticipate using this type of stand, I always bring along a sandbag in my daypack to support the forearm of my rifle. Because the elbow of the trigger arm can rest along the top of an adjacent shooting port, a shooter can hold his rifle about as steady as if he were on a benchrest. This is likely one reason why the score of 41 out of 48 for the four shooters was a bit higher than the 38 out of 48 fired in the long-range event, which covered the same distances.

Some tower stands don’t offer a rest for the trigger arm. In that case, I use a telescoping walking staff from Stoney Point (507-354-3360; www.stoneypoint.com) to steady the butt of the rifle. One of the first things I do when settling into a stand is to use a laser rangefinder to determine the distances of various landmarks all around my position.

**What We Learned **
We actually did better from the tower than from prone or from a supported rest, and the lesson you can learn from this is that a stand can be the best shooting location of all if it’s solid and if you know how to use it for maximum support.

Recommended Guns
Since the distances were the same in the long-range and tower-shoot events, I had originally intended to use the same rifle in both (the other three shooters did stick to the same guns). But after watching the 100-grain bullets fired from my .257 magnum get pushed around by the wind at 400 yards in the former, I decided to switch to another rifle and a bullet with a higher ballistic coefficient. I chose a Jarrett custom rifle in 7mm Remington Magnum, Jarrett ammo loaded with the Nosler 140-grain Ballistic Tip bullet, and a Swarovski PV 4X¿¿¿16X scope. The change paid off, and I managed to place all three of my shots into the vital area at 400 yards.

For long-range shooting from a tower or other elevated position, I want minute-of-angle accuracy, plenty of downrange punch, and gobs of scope magnification. The .270 Winchester and .280 Remington are good minimums, but magnums in calibers ranging from .25 to .30 are even better, especially when shooting big-bodied deer.

If you zero the .257 and 7mm magnums that I used here 3 inches high at 100 yards, they will be close to dead on at 300 yards and only 8 inches or so low at 400 yards. A hold on the upper edge of the animal will place a shot into its vital aarea (unless the wind blows your bullet off course). A fixed-power 6X scope will work, but I prefer a variable with anywhere from 9X to 12X at its highest magnification level.

When using a portable tree stand in country made up of wooded areas intermixed with open areas, I switch to a more compact rifle but still stick with a cartridge capable of reaching out to 300 yards or so. An accurate bolt gun with a 20- or 22-inch barrel in 7mm/08 or .308, wearing a variable scope with no more than 2X at its lower end, will get the job done.

Petzal
“I practice throughout the year, a lot of it with a .22. I probably shoot 2,000 rounds of rimfire ammo and 500 centerfire in practice, and 1,000 rounds at other targets.”

van Zwoll
“I shoot about 1,000 rounds a year in practice, a lot of it rimfire, and another 1,000 rounds of centerfire.

I shoot from the bench as little as possible.”