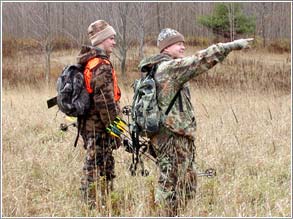 F&S Classics is a recurring series in which we republish some of our favorite hunting and fishing stories from the Field & Stream archives. Today’s entry, “A Golden Moment,” by Dave Hurteau, first appeared in the September 2001 issue. You can find the complete collection of F&S Classics here.

When you’re 18, your father is a strange man. Mine sat at the kitchen table after lunch, rapt in one of his simple ecstasies: Reaching over his shoulder with a fork, he found the hole in his T-shirt where he usually got his itch. He leaned into it and let his eyes roll under their lids. Satisfied, he said, “Maybe I will go bird hunting with you boys today.”

This was strange. My dad hadn’t been hunting since I could remember. But before long he was standing in front of my brother Dan and me, eager to go. He wore barn boots, work pants, a red sweater, green mittens, and a blue ski cap with a ball of white fluff on top—as if while he was dressing he couldn’t remember whether he was off to shovel manure or go Christmas caroling.

“You’re going in that getup?” I said.

I was certain there was nothing I could learn from my father—nothing about life, and certainly nothing about hunting. Naturally, I didn’t understand why he wore polyester pants or why he had that plasticky Brill Cream hairdo. But more fundamentally, I didn’t understand his life. Fifty years he’d lived in this tiny town of cornfields and cow pastures, where nothing ever happened, yet he seemed more than contented. Stranger still, he got a genuine charge out of the minutiae his life seemed to offer.

He’d stare at the snow falling outside the kitchen window and exclaim, “Marvelous!” or “Gorgeous!” Every fall he’d gawk at the same sugar maples: “Golden!” he would utter, stretching the word the way Homer Simpson says “Beer.” In our family, these were known as Dad’s golden moments.

Dad, Dan, and I drove along a tractor path lined with hay stubble. Just ahead, a Hungarian partridge scurried across the path, with its covey-mates following in a single-file train. Dan pulled over. We grabbed our gear, told Dad what we had in mind, and handed him a 12-gauge 870. He held it as if it might pee on him.

“Maybe I could just walk along with you guys,” he said.

We fanned out, with Dad in the middle, and walked to where the birds had disappeared. As we neared the edge of the field, I thought we must have walked right past them. Then I heard Dad cry out, “Jingling Moses!”

I turned to find him almost completely obscured in a billow of birds—wings and feathers and beaks and feet rising all around him—through which I could only clearly make out the white ball on his cap and the shotgun, held loosely in one hand by his side.

“Shoot the little bastards!” I screamed, but it was no use.

And they were gone.

The remainder of the day was more of the same. Even the singles and doubles flushed in front of Dad, as if they could see the white ball on his ski cap coming at a distance—a bobbing beacon of safe passage toward which they all shifted. With the day closing, we walked back to the car along the tractor path. None of us had even shouldered a gun. “What a day!” Dad said. “Tremendous!” I unloaded my gun and was stepping over a clump of brush when half a dozen Huns rose wildly in my face.

I stared for a moment. Maybe it was the color of the sun dying, angling warm light against the stalks of hay stubble, gilding the windows of the distant farmhouses and the rounded steel tops of the silos. The birds sliced the angled rays and seemed to drop beads of glitter from their wings.

I didn’t say it. I didn’t say anything. When you’re 18, you don’t give your father that much satisfaction.