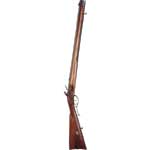 Jaeger-meister Dixie Gun Works has re-created one of the missing links in American firearms, the Pennsylvania Jaeger (that’s hunter, auf Deutsche). Originally built in the late 17th century to mimic the preferred hunting rifle of central Europe, the Jaeger has a short barrel (271Â¿Â¿2 inches), a heavy buttplate, which dissipates recoil efficiently, and a sliding wooden patch box. Dixie’s Jaeger is rifled one in 24 inches for a .54-caliber ball or bullet and is available in flintlock or percussion. It’s a nice, traditional blackpowder shooter in a compact, relatively light (81Â¿Â¿4-pound) design. About $700 from Dixie Gun Works.