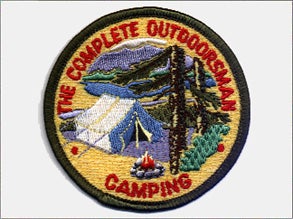 Skill #14 Pitch camp
The ideal campsite should be flat, have a source of clear water, be shielded from the prevailing wind, yet remain open enough for breezes to keep mosquitoes at bay. For your tent site, a forest floor of loose duff will absorb rainwater and be less likely to turn into a quagmire than hard-packed ground. But look up before driving the first stake-dead trees that can blow over are called “widow makers” for good reason. Also avoid ridge tops and open basins that invite lightning strikes, rock avalanche areas at the foot of scree slopes, and desert arroyos that can flash flood. Native Americans pitched their teepees with the opening to the east for morning light. Early-rising outdoorsmen should do the same with their tents.

Skill #15 Keep away the bears
Downwind from camp, select a tree with a stout branch 20 feet off the ground. Tie a rock to one end of a 50-foot length of nylon cord and toss it over the branch, 10 feet out from the trunk. Tie your food bag to the end of the rope and pull it high under the branch. Tie on a counterweight (another rock or food bag) as high as you can reach, winding up excess rope and leaving loops for retrieval. Push the counterweight up with a stick until both bags are balanced at least 10 feet in the air. Catch a loop of rope with a stick to pull it down.

Skill #16 Build the perfect fire
Start with tinder (like pine duff, dry moss, birch bark, or pocket lint), and collect a double handful of matchstick-size kindling (the dry twigs quilling the lower trunks of pine trees are perfect), an armful of pencil-size twigs, and larger branches in a bundle the size of a bear hug. Build a loose teepee fire, adding the larger sticks last. When your fire starts to burn down, place several logs parallel to each other in line with the direction of the wind. Scrape the coals to one side to make a keyhole fire for cooking.

Skill #17 Grill a steak over the coals
Place your grill across the stones that embrace the keyhole fire, 8 inches above the glowing coals. Cut the steaks to 1-inch thickness and sprinkle them with pepper. Cook them for five minutes or so on each side. For medium doneness-any more is a sin tantamount to shooting a sitting bird-press your finger to the meat. It should have the same give as the tip of your nose and be pink in the middle. Pull it off the coals, and eat with your hands.

Skill #18 Brew camp coffee
According to old-time trappers, coffee should be “hot, black as a bat cave, and strong enough to walk off on its own.” Start your brew with fresh ingredients-cold clean water and freshly ground beans. Bring a measured amount of water to a boil, take the pot off the fire, stir in the coffee (one rounded tablespoon of coffee per cup of water, plus a couple more “for the pot”) and let it steep, tightly covered, for 10 minutes. Settle the grounds by dropping a cold stone into the pot. If you don’t burn your lips, it isn’t camp coffee.

Skill #19 Bake Dutch oven biscuits
Preheat the oven, remove it to the side of your fire over a thin bed of coals, and drop in globs of biscuit dough so that the rounds don’t quite touch each other. (Hint: Mix the dry ingredients at home, so you only need to cut in the butter, add the buttermilk, and roll the dough with a bottle in camp. Cut rounds with a cup.) Shovel coals on top of the dished lid (you want three-quarters of your campfire coals on top, one-quarter spread underneath) and turn the oven every few minutes so that the sides are evenly heated from the fire. Check after 10 minutes.

Skill #20 Purify water
Boiling is the surest way of disinfection, and contrary to popular belief, you don’t need to heat beyond a rolling boil, even at high elevation. Decant the water by pouring it from one bottle to another to remove the flat taste.

Skiill #21 Wield an axe
The most versatile camp tool is a three-quarter-size or the slightly smaller Hudson’s Bay axe (if you hold the head in your hand, the butt should fit under your armpit). To section a small log for firewood, use a protector log to safeguard your legs. Split firewood blocks by wedging them upright between two logs or the forked branches of a downed log. Raise the axe in a short arc and bring it down squarely on the block. Wood splits easiest at a right angle to the grain.

**Skill #22 Tell a camp story **
All good stories begin with a variation of “This is no bull,” followed by “There we were.”

It is essential that you cultivate an ally who will back up your stories in return for your supporting his. You may have no idea what the hell he’s talking about, but if your ally says that the deer was 300 yards away when he took the shot and asks for confirmation, you say: “It was every inch of 300 yards. I’d say closer to 350.” Your ally, in return, will help you push the deer that got away well into the Pope and Young category.

The weather should be miserable. For hunting, arctic is preferred: well below freezing, winds strong enough to bend trees nearly horizontal. For fishing, think equatorial: above 90, merciless sun and oppressive humidity, not a breath of wind.

Act reluctant to tell your best yarns. Remember, stories are what you tell about yourself; legends are the stories others tell when you’re not around. When someone besides your ally says, “Tell these guys about the time you had to hang upside down from a limb to get a clear bow shot at that monster muley in Utah,” you know you have achieved immortality.