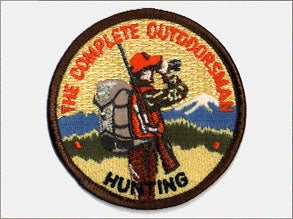 Skill #8 Age a track
When an animal takes a step, it disturbs particles of earth, sand, or snow. These upended and scattered bits give a fresh track a feathered, textured appearance that settles with time; older tracks may be distinct, but they will look smoother. On damp ground, the edges of a track will begin to dry after an hour or so, changing their color. In snow, fresh tracks retain soft edges until the snow sets up, also in about an hour. You can sometimes age tracks on dry ground by seeing how much debris has fallen or blown into them, or on snow by examining distortion caused by the sun. For the inexperienced, one trick of the track is to make an imprint with your boot before dawn. When you step outside the tent to hunt a couple of hours later, make a second print alongside the first. Note the differences. Any track you cut that looks comparably fresh is worth following.

Fresh track: Check the edges of a deer track left in powder snow with your finger. Fresh tracks give to the touch. Once the disturbed snow settles-which takes from 45 minutes to two hours-the sides of the track, as well as the ridge left by the gap between the hoof pads, develop a firm crust.

Skill #9 Pack out your kill
To quarter large game, field dress the animal and cut it in half between the last two ribs. Bone out the tenderloins and backstraps on the rear half, then cut and discard the lower spine. Split the back quarters through the tailbone. Bone out the backstraps on the front half, and lift the shoulders from the rib cage by slicing underneath the shoulder blade. Bone out burger meat from the neck and rib cage. Load each quarter into a separate gamebag, plus one for the boned meat. Pack out the bundles with an external-frame backpack or packboard.

**Skill #10 Hunt from a horse **
If you’ve never been on a horse, take lessons before your trip. Practice riding with your eyes closed to simulate predawn departures. You’ll be depending on balance more than sight. Sit tall in the saddle, keeping 60 to 80 percent of your weight on the stirrups. Avoid heavy hunting boots with a welt wider than the boot upper, which can jam in a stirrup and trap you if the horse slips or falls. Choose rain pants, not bibs. Ponchos are the worst: Errant gusts make them flap, spooking your horse.

Skill #11 Play deer camp poker
“Follow the Buck” is seven-card stud with a twist: Whatever card follows the six is wild. (Have you ever noticed how the six of hearts, spades, and clubs resemble deer tracks? Well, they do, and more so the longer you stay up at camp.) Here’s how it works. Play your regular game of seven-card stud, but in any of the rounds where cards are dealt faceup, if a six is showing, then the next card up in the round is wild. What keeps the game interesting is that you never know if your wild cards will stay wild, because if another face-up six appears later in the same hand, then the wild card changes. Old poker buffs will recognize this game as a version of “Follow the Queen” with the six in place of the queen.

** Skill #12 Skin and preserve a hide**
Hang the deer and slice the skin as shown by the dotted lines in the illustration, not cutting into the muscles underneath. Pull the skin away from the carcass with your hands, using the knife to free the skin where it sticks. To preserve, scrape away as much meat adhering to it as you can, spread it on a flat surface-if handy, use a piece of plywood-and coat the flesh side with at least 5 pounds of table salt. (Do not use rock salt.) Work the salt into the edges and all wrinkles in the skin. Tilt the hide to allow pooled moisture to drip off. Salt it again after 48 hours. Salted hides can be stored for tanning until the onset of warm weather. ** Skill #13 Shoot a double** When attempting to shoot two birds, take the more difficult shot first. Foor going-away shots, that is the leading bird. For ducks over decoys, it’s the trailer. In pass shooting, take the far duck, continuing your swing to take the one overhead. But don’t get hung up about priority-if you take time to think about shooting a double, you probably won’t hit either bird.

An Upland Double: Because it’s easier to swing across your body than to twist to the outside, take the bird that flushes to your gun side first, then come back across for the second.