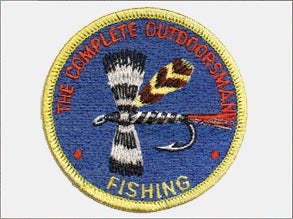 Skill #1 Lie convincingly
A lie that is 100 percent false-while an admirable feat-takes up a lot of space on the old mental hard drive. Lying as close to the truth as possible makes it easier to keep the details straight and ensures that you will be able to remember the lie not only tonight, but for years to come. Thus the wind was indeed out of the west that spring afternoon. Your story is likewise faithful to the fact that you hadn’t caught a thing all day with the exception of a large sycamore limb. And you actually did swamp the canoe (twice!) in embarrassingly benign Class II riffles while attempting to hit the slick water behind midstream boulders, soaking your lunch and your last Arturo Fuente cigar. By the time you drifted into the last pool, you were so disgusted that you had all but given up on fishing and you were merely trolling the Murray’s Hellgrammite. (All quite true: the perfect setup for the small amount of lying that comes next.) At the very moment the bow scraped sand, a 4-pound smallmouth the size of a mottled olive football slammed the fly, made a frantic run upstream, zigzagged back through the pool, panicked, and somehow leapt right into the boat. You were about to administer the coup de grace when you noticed she was oozing eggs and you couldn’t bear to deprive the stream of that much DNA. So you released her. Shrug nonchalantly, as if you wouldn’t believe it yourself if she hadn’t finned you good just as you let go. Display the wound (actually sustained when you slipped while decapitating the cigar) as proof and ask if any of your buddies has an extra stogie, as you’d like to celebrate.

Skill #2 Fish with junk
A little flash, a little wiggle, or a shape that vaguely resembles bait is often all that’s needed to catch fish. Emergency fishing lures can be made from all sorts of things: A bit of yarn wrapped around the shank of a hook makes a decent nymph. Wrap a wad of tinfoil around your hook, then mold it so it resembles a minnow. Cut a piece of thick cloth or leather into the shape of a leech, frog, or crayfish. Thread a wine cork onto a long-shank hook for a popper. Need sinkers? Use nuts, bolts, and washers. Need a hook? Bend a safety pin.

Grab the fly line close to the rod with your line hand. Start your back cast. Just as you begin your backward power stroke, pull the line (in your line hand) toward your hip pocket. Don’t jerk-just make a smooth, fast motion of a foot and a half or so, and release. Your back cast should shoot rearward with added zip. That’s a single haul-and often all you need for a little extra distance.

To complete the double haul, ease your line hand back toward the reel as your back cast unfurls. Then, just as you begin your forward power stroke, pull downward again as before. Finish the cast, and let the slack line shoot through your hand.

Skill #4 Tie a blood knot
Join tippet to the leader with this classic flyfishing knot.
(1) Cross the tag ends of the lines, and leave 6 to 8 inches overlapping. Hold where the lines cross, and wrap one tag end around the other standing line six or seven times.
(2) Repeat with the other line, and bring the tag ends through the gap between the wraps, making sure to go in opposite directions.
(3) Pull the lines, moisten, and draw the knot tight.

Skill #5 Photograph a trophy
A lively fish and a big smile are most important. Shoot with the sun at your back, and tell the angler to tilt his hat to avoid facial shadows. He should hold the fish out toward the camera, with one hand cradling its belly and the other below the wrist of the tail. The fish should be in a natural position, its side to the camera, with no belly white showing. Focus on the fish’s eye and frame the shot tightly. A wide-angle lens will magnify the fish’s apparent size.

Skill # 6 Land a big fish
Ideally, get help to net the fish. Maneuver the fish toward the net with its head up near the surface. The netter should hold still until you’re ready, and net the fish headfirst in one smooth motion. If you don’t have a net, steer the fish into the shallows, making sure it is well played before trying to handle it. Grab the fish by the wrist of the tail, the lip, or behind the head.

Skill # 7 Release a fish
To help ensure the survival of a released fish, land it quickly, handle it gently, and avoid removing it from the water. If you must take it out, make the time brief. Use a net to land larger fish, but keep the fish and the bottom of the net immersed while you dislodge the hook. Then release the fish by gently holding it underwater, head into the current, until it swims off by its own power. If there’s no current and the fish seems lethargic, move it headfirst through the water until it revives.