Neither a contest nor a religious experience, hunting, is reward enough, no matter what the quarry. 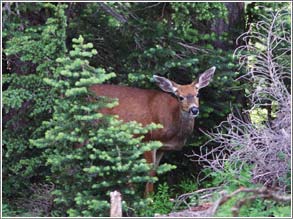 “Simplify, simplify,” Thoreau said, a century and a half ago; yet today we only seem to want to make our lives more complicated, even when it comes to our hunting.

We are constantly urged, in newspapers, magazines, and books, on TV shows, by our fellow hunters, that the hunt must either be part of some contest to acquire the largest possible trophy, or a quest to achieve the pure-white radiance of enlightenment. It is as if hunting were not enough by itself, but must stand for something bigger. Hunting, though, is only hunting, and sometimes we need to be reminded of why we go every fall.

Snow covers only the peaks this early in the fall, the wide basin below left bare, red dirt and sage stretching unbroken nearly to the shimmer of the western horizon, before being walled off by the next, abrupt white-cowled range. As the post-storm sky above the fresh snow turns a delft blue in the sunrise, the elk, driven to lower elevations by the weather, begin streaming back onto the mountain in knotted skeins, the bulls to the rear.

Kneeling in snow behind a tumble of boulders, my outfitter friend Ed Beattie and I glass the elk as they pass by in what are hundreds. They move beneath the shadow of the ridge, headed for juniper, white-bark pines, sun. Steam plumes from their nostrils and wisps upward, and even the farthest as they pass are within rifle range.

As we go on glassing, the line of elk is drawing to an end; but there always seems to be one more bigger bull coming along. I let my binocular rest against my chest and unsling my .375.

Ed goes on glassing and without even lowering his binocular, answers, “None.”

“Ed,” I say as logically and unemotionally as possible, employing a phrase that will echo long into the hunt, “I’m only looking for a cow.”

Lowering his binocular now, Ed turns to me.

“That’s why we’re letting them go,” he says. “I’ve got hunters looking for bulls, and we’re going to let every one of these get back onto the mountain before we even think about taking a cow.”

So we went on watching the elk pass, until they had climbed the shaded slope and crossed through the timber backlit by the sun. Then we stood and hiked back to the pickup, chains on all four tires, parked in the snow at the end of the ranch road, elk season exactly one hour old.

I was only looking for a cow, as I’d told Ed the spring before. I’d hunted, and killed, a bull or two, but I’d somehow always thought of a cow as the easy way out of elk hunting-more a shopping excursion than a real hunt (whatever “real” might mean). This year, though, feeling particularly gray, and with a freezer starting to look a tad gaunt, I was very much in the market for an easy elk; and Ed, who had a camp near the heart of Wyoming at the southern end of the Bighorns, did little to dissuade me from my rather unambitious ambition.

A practical incentive, or advantage, of a cow-elk hunt is that it is probably the most sensible introduction to elk hunting. For the unguided hunter, it represents an opportunity to learn about elk habits and still have good odds of bringing home elk meat without worrying about whether he should shoot a raghorn or hold out for a royal (which for some can mean years of elk hunting without ever killing an elk). For the guided hunter, hunting a cow represents a very reasonably priced means of evaluating an outfitter, firsthand, before making the invariably substantial investment in a hunt with him for a trophy bull.

That, of course, is all part of the theory of hunting cow elk. The reality is not always so straightforward, something I learned when Ed and I set off later on opening morning, working our way up a muddy truck track t draws east of the ridge the elk had crossed at sunrise.

We came out on a broad, brushy mesa, and almost at once spotted a pair of calves trotting across it, nervous heads held high. The sun had already licked the snow off the level ground, like frosting off the top of a cupcake, and Ed wanted us to hunt off the west side of the mesa, scalloped out by one draw after another. Elk were there; all we had to do was find them.

By the afternoon, shucked down to shirt-sleeves, we had hunted tracks across all the draws, out to where, at the end of the mesa, the slope broke off in steep cliffs. Below us was a black hole of standing and downed timber, rocks, and rotting snow, melt spangling the needles on the trees. While you might follow a big bull down into a potential jackpot, you did not follow a cow; and so Ed called a halt. We wanted a cow where the pack would be a pleasant stroll, not a mountain rescue.

At last light we sat on a point overlooking a saddle; and when no elk came, we hiked back to the pickup, a little stiff from the cold. Zipped that night in my down bag, I felt just fatigued enough to know I’d put in a good day’s hunting.

The next morning, Ed tried to drive a cow to me while I sat on the point, but all he could find were bulls, big 6×6 bulls. As we sat and discussed strategy, we looked up to see two huge sets of antlers moving off the mesa to the slope, the elk underneath slowly rising into view as they neared the rim. We watched them go out of sight.

Our new plan was to cross the top of the mesa to the end, above where everything had fallen away, to see if we could find the elk before they moved down into the tangle. So we took off, the day turning even warmer than the one before as we went.

We would have expected, this early in October, to be hearing, still, the occasional bugle; but we had heard none. Then we got to the end of the mesa and were about to walk right off the rim and onto the slope covered in grama grass when a bull’s bugle directly below us shook the air like the blast of a semi’s horn.

Without a word (except a harshly whispered expletive), we spun and dropped to the ground, butt-scooting our way off the mesa and down the slope, inching cautiously until the Indian file of a dozen elk-one good bull, a couple of raghorns, the rest spikes and cows; including a lone cow between two spikes at the very end of the line-came into unobstructed view, less than 100 yards below.

“Make sure she’s clear,” Ed hissed as I got the fore-end of the High Tech Specialties synthetic stock into the crossed sticks, the reticle of the 4X Leupold in the crease behind the cow’s shoulder. Checking to make sure there wasn’t another elk behind the cow, I thumbed off the safety, drew a breath, and squeezed the trigger.

The silence that followed was even louder than the dry click had been. I could feel Ed staring at me as I let out my breath and worked the bolt. I caught the cartridge as it spun out of the action and slipped it into my shirt pocket, glimpsing the half-indented primer. As I bolted another round, I could only hope the spring, that had never failed before, would fire the cartridge this time.

The elk had begun shifting around, the rear spike moving past the cow, leaving her all alone at the end. Putting everything out of my mind, I squeezed the trigger once more.

The cow leapt past the spike, now going flat out as the rest of the elk began to run. After 20 yards she stumbled, fell, then rolled down the slope, hanging up in a clump of sagebrush where she lay, no longer moving. Scores of elk began to drift through the timber below, the trophy bulls snowy-backed in the dark parks, younger bulls flanking them, cows and calves scattered throughout. When the elk were gone, we stood and walked down to the cow to tag and dress her and take her apart to carry back to camp and to hang from the rafters in the chill of the old stable, the meat cooling through the night while northern lights pulsed in the sky.

I was only looking for a cow, and what I had found, while neither a record animal nor a profoundly sacred spiritual experience, hadn’t exactly been a walk down the meat aisle in a supermarket, either. What I had found, at its most simplified, was a good hunt. A good hunt for a good animal that would let me put some good meat away for the winter. It was as uncomplicated as that, the way most hunting is and, if we are honest, the way most of it should be.

I was only looking for a cow, and what I had found had been more than enough. n the chill of the old stable, the meat cooling through the night while northern lights pulsed in the sky.

I was only looking for a cow, and what I had found, while neither a record animal nor a profoundly sacred spiritual experience, hadn’t exactly been a walk down the meat aisle in a supermarket, either. What I had found, at its most simplified, was a good hunt. A good hunt for a good animal that would let me put some good meat away for the winter. It was as uncomplicated as that, the way most hunting is and, if we are honest, the way most of it should be.

I was only looking for a cow, and what I had found had been more than enough.