Learn From Your Deer

It is said, "Dead men tell no tales." Not so with deer. 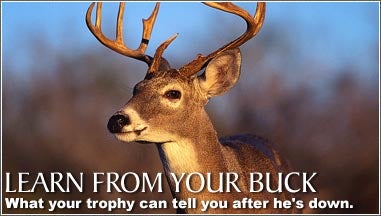 The night I carted my first bow-killed buck to the local archery shop to show it off, what I was after was praise from the guy who’d helped me set up my bow and given me shooting pointers. I got that when Dave clapped me on the shoulder and said my 5-pointer was a heck of a first deer. But then I got something more valuable: a lesson in how dead bucks have a lot to say if you know how to listen.

Dave ran his hands over the buck’s coat and inspected the hooves, face, ears, and rack. Then he said, “Listen up, ’cause I don’t do this for everybody. See them burrs around his chest? Probably had a lot more hanging there before you dragged him out. That means he’s hanging out in the thick stuff. You still hunting that same farm?”

“Well, there’s probably only a few places on it where the briars grow that thick,” he said.

“Now, look at this. You haven’t seen enough of ’em to compare, but his hooves are pretty shiny, fairly soft, not much wear. That means he’s bedding low, or at least not where it’s rocky. If they were chewed up and hard, you’d have a ridge-running buck. So now you know which briars to target.

“Rack’s pretty dark. He likes the shadows. Just like bass, deer’ll turn the color of where they live. Some of the farmfield bucks I see in here have racks that are almost bright yellow from the sun bleaching ’em. Not this guy. So now you know more: briars, low, and a good overhead canopy.

“Look how beat up he is. Couple of notches in each ear, little scars around his muzzle. And check this… .”

Dave turned the deer and fingered two small, fresh scars on the buck’s shoulder, maybe the result of a single good left hook from another set of antlers.

“This guy’s been dukin’ it out,” Dave said. “I couldn’t tell you if he won or lost, but somebody stuck him good right there, and it wasn’t too long ago. I’d lay money there’s at least one other buck his size nearby. Maybe more, maybe bigger.”

Dave looked me square in the face and said, “I bet you didn’t even check his stomach to see what he’d been eating, did you?”

I shook my head, feeling like a kid who’d just lost the cape to his Superman outfit.

“You go back to that gutpile and look. The semidigested stuff is where he was feeding this morning. The older stuff is what he had 24 hours ago, which is last night. That’s where he was heading when you nailed him.”

Dave took a step back and sized me up. “I’ve done the hard work. Think you can connect the dots now?”

I fairly flew out of the shop. I was already setting up on a buck I hadn’t even seen yet. All thanks to a dead deer that couldn’t keep its mouth shut.