Out On a Limb

If you're afraid to pitch your lure into dense, gnarly cover, you're missing the strike zone. 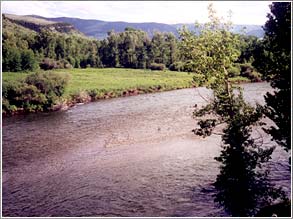 The average fisherman would rather lose a bass than a lure, though common sense dictates that any strike-especially one from a potential career fish-is worth considerably more than the cost of a lure. As a result we pitch and skip baits around the perimeter of threatening cover, but just can’t bring ourselves to punch a cast straight into the snarls.

Most bassers already understand that if a lure is not banging structure, it’s not in the strike zone. Bass crave cover, and catching them means putting the bait right in there with them. Becoming a better bass fisherman means applying that same aggressive attitude to visible obstructions. Doing so will bring more strikes and will not leave any more vacancies in the tackle box.

Fact is, probably 90 percent (or more) of the casts that finish in a tree don’t end in a break-off. A calm, patient waggle will free most misfires, even with treble-hooked crankbaits. More important, 100 percent of the casts that don’t penetrate dense, visible cover will not catch fish tucked deep within it.

Light Touch
The most practical approach to overhangs and flooded brush is an upgrade to “muscle” rods and lines. In prime bassing water, no good cast lands far from a potential snag, and a rig with backbone can haul a fish through the tangles and into the open before it has a chance to react. Likewise, heavyweight tackle can also pull a hook through soft wood or navigate a leaf-stripping path to freedom, if the need arises.

Such tackle, however, wouldn’t be appropriate in clearer water. But by taking a few precautions and following up with some subtle trickery, you can fish the same snags on lighter gear.

Bassing guru Will Kirkpatrick, whose “Fishing Schools” classroom is Sam Rayburn Reservoir in the piney woods of East Texas, stresses that the light-tackle bass fisherman must learn to dance around problems rather than stomp through them. If you’re throwing a worm, Kirkpatrick says, make it a straight-bodied worm rather than a broad-tail that might wrap a limb. Use a screw-lock weight (or a toothpick plug) to secure the sinker against the hook eye and worm so the two don’t become separated and work against each other. Lightweight jigs fitted with weedguards (3Â¿Â¿8 ounce or less) also navigate well through exposed brush.

“I like short-armed spinnerbaits, too,” he says. “I cast them beyond the brush, lift the rod until the lure is right over where I want it, then drop it straight down between the limbs and back into the water.” The spinnerbait’s stubby arms act as a built-in snag deflector.

Downsized craw worms (again with a small weight snugged tight to the hook) may be the best “brush busters” in the box. Craw worms have accounted for more entries in Texas’ ShareLunker program, which accepts only bass weighing 13 pounds or more, than any other lure type. Kirkpatrick opts for 3-inch models, the “skinnier” the better for snaking through exposed brush.

Working the Angles
Toledo Bend pro Jim Morris throws Wacky Worms, exposed hook and all, into shoreline bushes and trees. His insurance against hangups is a small piece of an old worm slipped over the hook point and barb. Another Morris strategy is to upgrade to a 71¿¿2- or even an 8-foot rod; he uses it like an old cane pole to dip soft plastics vertically into gaps between limbs.

Where visible structure lends itself better to a horizontal rather than a vertical assault, the best cast is a sidearm or underhand flick of the wrist that launches the lure low across the surface. “I know a guy who puts his baitcasting reels away and uses a spincasting reel to fish the brush,” Morris says. “He pitches a little Rogue up in there as far as he can, then just twitches it in the same spot until something happens.”

My friend Jim Van Hoozer spent a lot of pre-children weekends competing in bass tournaments. HHe did quite well, judging by his trophy collection. One of the things he did best was to snatch big bass out of shoreline brushpiles.

“When the water got clear, I’d go as light as 6- or 8-pound-test line,” he says. “That’s important, because you’ve got to get the bite first. I’d throw a worm right into the thick of everything and shake it around a little. When I’d feel the hit, all I’d do is lift the rod very gently and try to lead the fish out of the cover without it knowing what was going on.”

Just as a dog will hang fast to a bone on a string, a bass will hold a lure against modest pressure. Once you coax the fish away from trouble, Van Hoozer said, you can lower the boom and start the real fight.

Because retention is so critical to this little trick, opt for soft, scented plastics and hide the hook well. A gentle tug of persuasion between their lips doesn’t seem to bother the bass, but they don’t have the same tolerance for foul tastes or sharp jabs.

One disadvantage to crashing the bushes is increased noise. The closer you get, the more likely your boat will crunch and creak and put bass on alert. Proper distance is a judgment call; calculate it on the amount of incidental commotion in the area, such as might be caused by wind or chop, your own casting ability, and how much you really care about losing lures.

Bass are structure-oriented fish, and catching them means putting a lure where the fish can see it. Now and then that also means leaving a lure where you can see it. The decision should be easy. Weigh the known against the unknown. You know where to get another lure, but unless you make the cast, you’ll never know what’s under that bush.