Want to have the best gobbler hunt of your life? Listen up. 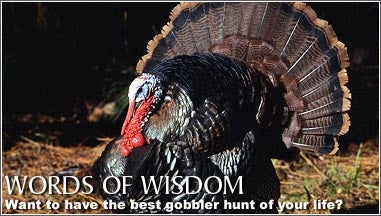 Bobby Stickley is planning to hunt gobblers in his native Virginia, in West Virginia, New York, and Montana this spring. After chasing turkeys for more than 30 years, the president of the Stonewall Jackson Chapter of the National Wild Turkey Federation has developed some definite opinions on the game:

“It’s supposed to be a fair fight. Call him in close enough to kill him, you win. You can’t, he wins. A rifle’s cheatin’. And no shot bigger than No. 6. Either you kill him clean or he gets away uninjured. I hate to see cripples. Gotta have some respect for the bird.” He says spring gobbler hunting is the only hunting he’s ever done where you can spend six hours locked in combat, never fire a shot, and have the best damn hunt of your life.

Stickley has two pet peeves with most of his run-and-gun brethren: They call too much and move too soon.

“I like to let the bird call the tune. If he double gobbles at your first call, it’s fine to be aggressive. If he doesn’t-and he likely won’t if he’s experienced or living in an area that gets a lot of pressure-play it close to the vest. Call sparingly but with different types to see which one the bird favors.” Stickley, for example, is an expert with diaphragms but has recently been relying on friction calls simply because so many other hunters are into diaphragms. His secret weapon is an emerald-green glass call handmade by Cody Turkey Calls (717-362-8413). “This is the Stradivarius of ’em all,” he says.

Recognize, however, that the best turkey call isn’t always the best move. Stickley frequently goes silent and scratches leaves to imitate the sounds of hens feeding or walking. “A lot of gobblers will come to those sounds when they won’t come to calling. But make sure you get the cadence right.” The cadence of a turkey scratching is usually two scratches, then one more, followed by a pause. Likewise, a walking bird will take two steps, one step, and then pause.