The best turkey gun shoots like a rifle, doesn't attract attention, and puts a lot of lead into a small space. 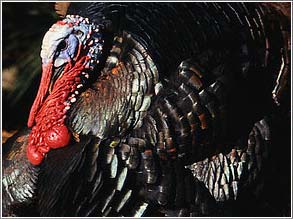 We hunt wild turkeys as if they were big-game animals. You don’t swing a turkey gun-you aim it as if it were a rifle. That’s why the turkey gun has evolved to resemble a hybrid of a smoothbore and a slug gun.

ACTION
Save the doubles for the uplands. Turkey guns have one barrel. It’s easier to fit an optical sight to a pump’s or auto’s receiver than to the rib of a break-action gun. And if you shoot a single-barreled gun, there’s no need to worry that two barrels won’t shoot to one point of impact.

Rate of fire and magazine capacity don’t much matter in turkey hunting; the decision to choose between a pump and an autoloader should be based on other factors. Gas autos reduce the recoil of mammoth turkey loads, but you’ll only shoot your gun once or twice during the spring. Most pumps weigh less than autos and they definitely cost less. You’ll appreciate the ounces saved as you put miles on your boots. A pump also offers a small safety advantage; you won’t make that frenzied launch from the tree to the fallen bird with a fresh round in the chamber.

GAUGES
To kill a bird, you need to drive four or five pellets into a target roughly the size and shape of a walnut balanced on a pencil. The best way to do this? Throw a lot of lead. A 3-inch 12-gauge handles payloads of up to 2 ounces of small shot, more than enough to saturate a turkey’s head and neck with pellets. Ten-gauges and 31/2-inch 12-gauges fling even heavier shot charges, but in my view, 11/2 to 13/4 ounces of shot suffice at ranges to 40 yards. Anything more is overkill at both ends of the gun. Ten-gauges are too heavy for the woods, and the extra payload of the long 12 doesn’t kill birds any deader at 40 yards; it only generates more recoil.

WEIGHT/BARREL LENGTH
You’ll carry your gun for miles on a turkey hunt, usually slung over your shoulder. In the excitement of shooting at a gobbler, you don’t really feel recoil. There’s no need to wheel a cannon around the woods. Call the ideal weight 7 to 8 pounds for a 12-gauge.

Short (20- to 24-inch) barrels won’t grab vines and branches as you carry the gun over your shoulder or when you sit against a tree. You don’t need the few extra feet per second of velocity or the weight-forward balance a longer barrel provides. In fact, it’s easier to hold a short-barreled gun ready for a shot while you wait for a turkey to come into range.

STOCK/FINISH
The glare from a glossy stock or a shiny blued barrel puts gobblers on red alert. Skip the paint and tape and buy a gun with matte-finished wood and metal. Turkey guns don’t endure the abuse that waterfowl guns routinely absorb, so a synthetic stock isn’t an absolute necessity. Camo finishes are the rage right now, although to my mind they’re not necessary. Designer camos add $70 to $150 to the cost of a gun and don’t hide it appreciably better than a matte finish does. Full camo does, however, make it easier to lean your gun up against a tree and lose it in the woods (I’ve done this).

Swivel studs belong on every turkey gun. No matter how light your gun, it will become a burden if you can’t carry it over your shoulder. A padded sling or, better yet, a shock-absorbing neoprene strap is a must.

SIGHTS/TRIGGERS
Ask anyone who’s missed a turkey: Centering a tight pattern on a turkey’s head is harder than it looks, especially when you have no more than a front bead sight to guide you. Front and middle beads are the bare minimum sight system for a turkey gun, and open sights are better. Light-catching fiber-optic front and rear sights, which show up brightly in the early morning, are very popular right now. Red-dot sights or low-power scopes are the fastest and surest sights of all for putting yourr pattern on target. Many guns now come from the factory drilled and tapped for scope bases.

Most turkey guns have terrible triggers (the Ithaca is a shining exception). The heavier and creepier the trigger, the easier it is to yank your shot off target. For $30 to $50, a qualified gunsmith can smooth the pull of most shotgun triggers. It’s worth the investment.

CHOKES
Turkey chokes have constrictions up to .075 inches, much greater than the standard .04 of a Full choke. Such tight chokes cluster 90-plus percent of a shot charge into a 30-inch circle at 40 yards, terrible for wingshooting, ideal for smothering a turkey’s head and neck with shot. Most turkey guns now come with a turkey choke included, although if you’re interested in fiddling with a pile of tubes to find the very best, there’s a thriving business in aftermarket turkey chokes.