What you do-or don't do-in the off-season months plays a huge part in your success come fall. 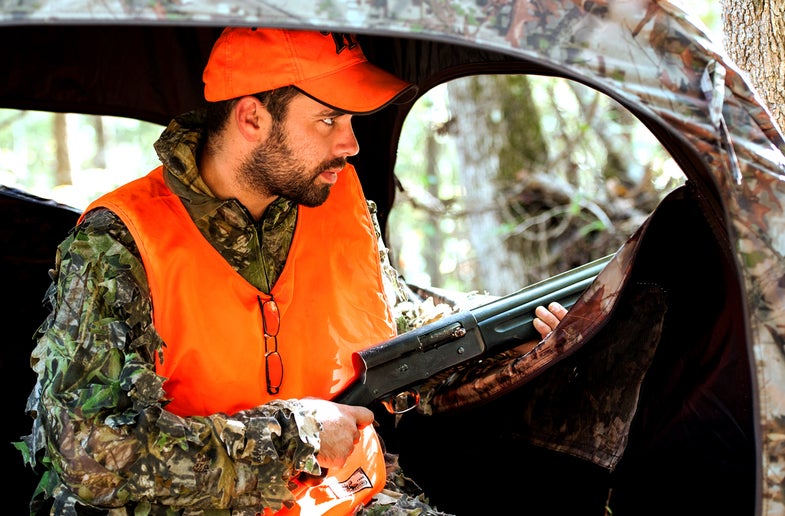 There’s an old joke about a hardscrabble Vermont farmer riding a tractor with a .30/30 strapped to its rusty hood. A tourist stops for directions and asks what the gun is for. “Well,” the farmer replies, “there’s more than one way to harvest corn, don’tcha know.” The same can be said for harvesting a deer. One way is to hurriedly squeeze in a day of scouting immediately before opening day, hang a stand on the first trail you find, and hope like heck a buck comes close. Another way is to develop a year-round plan that ensures you will be in the best position to succeed when the season finally arrives. You don’t always need a gun or bow to hunt deer-all you need is the determination to fill your tag in the coming season. The following is an outline of my annual deer hunting calendar for the Northeastern states I hunt. You should adjust it for seasonal conditions in your area and use it as a basis for developing your own year-round plan.

January
With hunting season over, it’s time to do some aggressive scouting. Areas that were treated with kid gloves in the fall can be dissected and studied without fear of spooking deer and thus ruining an upcoming hunt. Plunge into thick cover and look for bedding areas and other activity centers. These are the sanctuaries where deer felt safe when the heat was on; chances are they will use them again next fall. And in regions where snow does not arrive during hunting season, don’t miss the opportunity to get out after the first snowfall, when deer sign can be read like a book.

February
The woods are locked in winter and deer activity is at a minimum, so continue your scouting indoors by ordering topographic maps, aerial photos, and even satellite images of areas you plan on hunting next fall. Topographic maps provide an overview of the landscape and can help you locate saddles, draws, creekbottoms, and other deer travel corridors. Aerial photos offer a more detailed picture of vegetation patterns. They’re great for pinpointing potential stand sites and can usually be obtained from state highway or tax departments. The best of all bird’s-eye views are provided by high-resolution satellite images from companies such as TerraServer.com and DigitalGlobe.com. Some satellite images are so sharp, you can discern individual trees.

March
The late winter and early spring is a great time to be back in deer country. Forest cover is the barest it will be all year, and rubs, scrapes, and trails made the previous fall stand out. Scout for new stand sites and hunt for shed antlers, which confirm that a particular buck or bucks made it through hunting season. Relocate fixed portable stands that did not produce last fall. Improve productive stand sites by cutting shooting lanes and clearing paths that let you approach quietly from downwind.

April
Habitat investments made in the spring pay big dividends in the fall. If, for example, you have a favorite stand that overlooks some wild apple trees, you can boost their fall fruit production by nourishing them with fertilizer spikes. The same goes for other mast trees. Even deer can be fertilized. Where poor soil nutrients limit antler development, put out some supplemental mineral licks. And if you want to create a food plot, this is the time to get started, especially if you will be planting clover and other cool-season plants that grow poorly during hot, dry periods. (Be sure these activities are legal where you hunt.)

May
If you’re looking for greener hunting pastures, contact the state wildlife agency. The previous year’s deer harvest report is usually available by this time; this information can tell you where deer numbers and success rates are greatest. If only a wall-hanger will do, look for zones with low yearling-buck frequencies in the harvest; that means a higher percentage of the buck kill consists of trophy-age er. And don’t stop there. Call the state deer project leader. Deer biologists have a wealth of information, and most will happily spend a few minutes on the phone fielding questions during the off-season.

June
The deer woods are a buggy jungle, making this a good time to hit the road. If you hunt private land, visit the owner. Unless you hunt your Uncle Joe’s back 40, don’t assume you’ll be welcome next season just because you hunted there before. The land could have been posted, developed, or sold. And if you would like to hunt private land, this is the time to ask. The further in advance of hunting season that you approach a landowner, the more likely you will be favorably received. The last farmer I asked for permission said he was only going to let one or two hunters onto his place-fortunately, I was No. 1.

July
As summer days shorten, deer become more active and are less wary than at any other time of the year. This is a great time to do some long-distance scouting for mature bucks, which can often be seen feeding in open fields during long summer evenings, their velvet-covered antlers quite visible through binoculars.

If you plan to hunt unfamiliar terrain, now is the time to learn the lay of the land. Start by looking at the big picture: what the road and trail system is like, where the fields or clear-cuts are, and how the streams, ridges, and hollows are oriented. Look for deer food sources, bedding areas, travel corridors, and escape routes. Carry a map or GPS and make notes.

August
Continue scouting, while systematically narrowing down your efforts to specific areas where deer activity is greatest. Look for fresh tracks, droppings, beds, and well-used trails. Put the pieces together to determine deer movement patterns, and try to confirm them with sightings. Be as unobtrusive as possible. Because deer are most active early and late in the day, activity centers should be scouted in midday; save mornings and evenings for long-range observations. Hang any additional stands with as little disturbance as possible.

September
Deer are beginning to focus on fall food sources, and so should you. Get out and determine what preferred foods are most abundant. Just because apples or acorns were plentiful last fall doesn’t mean they will be next year. Mast crops vary from year to year. Confirm before the season what is available. This applies to farm crops as well. A buddy of mine hunts a trail leading to a picked cornfield on posted land. He’s been so successful, he didn’t bother scouting last year. Because the fall was so dry, however, the farmer plowed the field after harvesting, and my friend’s opening weekend was lost.

October
Bow seasons are in full swing, and the first buck rubs herald what is to come. Bucks are still interested primarily in putting on fat, however, so hunt travel routes leading to feeding areas. Once the pre-rut gets going, switch to travel corridors between bedding areas. I’m more of a gun hunter than a bowhunter, so I like bow stands with a good vantage point that let me scout-hunt. This way I can hunt as well as continue to learn about deer movement patterns-knowledge that I can put to good use during the coming firearms season.

November
The peak of the whitetail rut occurs between the 10th and 30th, making November the Holy Month for deer hunters. Now is the time to cash in your vacation days. Hunt as often as you can and pack a lunch-rutting bucks are just as likely to be moving at midday as they are in the morning and evening. Resist the temptation to run around looking for fresh rubs and scrapes. Instead, put past scouting to good use by concentrating on doe activity centers and travel corridors between bedding areas.