Interpreting the telling trail of blood. 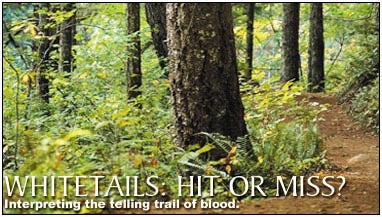 In the echo of the shot, a hunter’s first question is_ Did I hit it? His second is _If I did hit it, where? To recover wounded game, it’s best to answer the latter question sooner, rather than later, along the blood trail. For example, if the indications are that you have gut-shot your deer, pressing hard on its trail will only cause it to die unrecovered.

Here are a baker’s dozen of tips to help you determine if your aim has been true.

1 A deer that has been cleanly missed often stands stock-still, or takes a few bounds and then stops, to try to pinpoint the source of the disturbance. However, never take for granted that a deer is unwounded on the basis of its behavior.

2 If you know exactly where the deer was standing when you shot, the absence or presence of clipped hair there will indicate if it’s been hit.

3 Lots of hair indicates a grazing shot, whereas a smaller amount often points to a body shot.

4 Brown hair tells you the shot is in the upper part of the animal. White hair indicates a low shot.

5 Lung-shot deer either run or show no immediate reaction, then bolt at full speed.

7 Grazing shots and shots to the legs or brisket cause the animal to jump and run.

8 A gut-shot deer clamps its tail down and hunches up as it runs.

9 A deer shot in the spine or brain drops. The shock from a bullet near the spine can also cause it to drop, though it may get up and run afterward.

11 The color of blood can be misleading. More telling is the manner in which it appears. A fine spray on both sides of the trail that may paint the bushes to a height of several feet points to a lung or heart shot. Fine bubbles in the blood confirm a lung hit.

12 A large quantity of blood at the point of impact, turning to continuous drops that diminish over several hundred yards, indicates a leg or muscle wound.

13 Gut-shot animals often show little blood at first, then a few large splotches. Particles of food or a foul odor confirm a bad hit. Blood loss diminishes when the animal moves, as blood is pumped into the leg muscles. It flows more freely when the animal lies down. A deer that is permitted to bed will die within a mile. You should always wait several hours before following after a gut-shot animal.